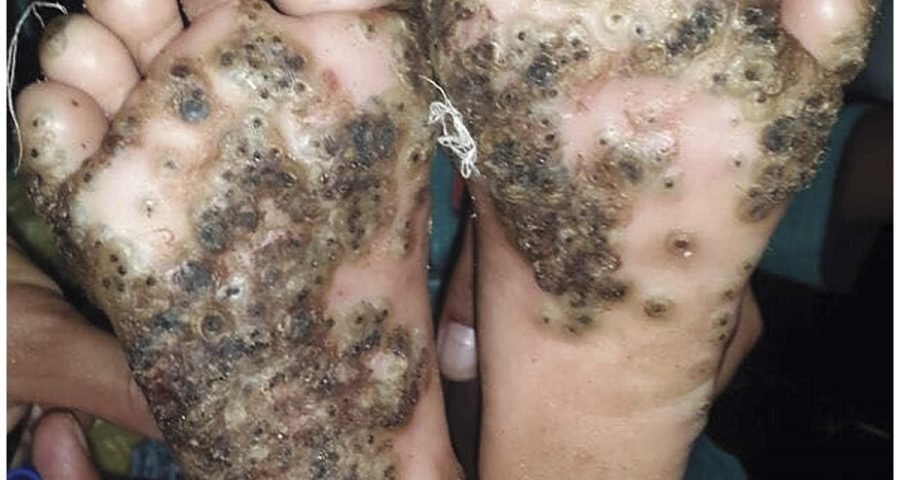 An otherwise-healthy 10-year-old girl is featured in an alarming case report from the New England Journal of Medicine. The girl had been playing in a pigsty in rural Brazil two weeks before visiting a doctor. For the 10 days leading up to her appointment, she had developed painful and itchy lesions on her feet and toes, according to the report, with “black dots in the center.”

The girl turned out to have a skin condition called tungiasis, a parasite infestation caused by a female sand flea. The flea, called Tunga penetrans, can spread the disease to humans and animals.

Tungiasis occurs after the flea burrows into a person’s skin. The fleas prefer to burrow in the toes, heels, soles, and rims of the feet, according to the World Health Organization (WHO). In fact, 99% of lesions caused by these fleas are found on the feet. The resulting rash in tungiasis infestations is pretty scary looking, with painful green spheres with black holes in their centers.

Perhaps the only thing worse than what tungiasis looks like is learning how tungiasis comes to be (buckle up). A female sand flea burrows into the skin of an animal or human, where she is then fertilized. A male sand flea will only fertilize a female after the female has started feeding on a host’s blood. “The [female] flea’s hindquarters remain in contact with the air, providing an avenue for breathing, defecating, and expelling eggs,” according to the WHO. “During a period of four to six weeks, the embedded sand flea undergoes different developmental stages, produces eggs, and eventually dies.” The flea’s eggs then fall to the ground.

In areas where the disease is common, people are aware of what an infestation looks like. Once a doctor evaluates a tungiasis rash, a number of treatment options can be put into action. One is the surgical removal of the sand fleas. “Surgical extraction [of burrowed sand fleas] should only be performed in an appropriately equipped health facility or by an experienced community health worker using sterile instruments,” according to the WHO. “After the removal of sand fleas, the sore has to be dressed appropriately and the tetanus vaccination status needs to be verified and a booster vaccination given, if indicated.”

In some areas where tungiasis is common, locals without access to doctors or sterile instruments end up removing embedded sand fleas themselves. Tungiasis can also be treated with a type of medicine called a dimeticone, a topical antiparasitic that has also been used to treat head lice.

Coconut oil-based bug spray might help prevent tungiasis. “The regular application of coconut oil effectively prevents [the sand fleas that cause tungiasis] from penetrating into the skin,” according to the WHO.

The patient in the new case report had received all her recommended tetanus vaccinations and sand fleas were removed “from multiple lesions,” her doctors wrote. Luckily, she had no complications at a follow-up appointment either.