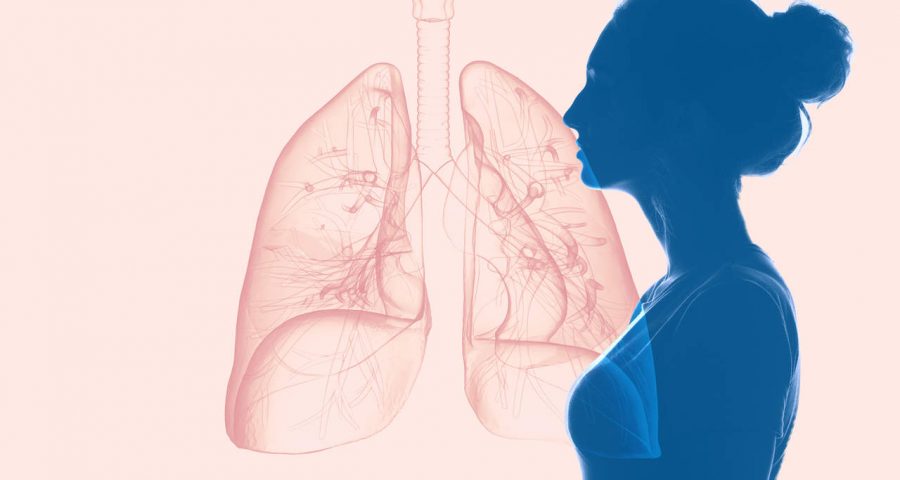 Long before vaping became trendy, the best way to get a nicotine fix was (and often still is) by smoking cigarettes. While older generations might have feigned ignorance about the dangers or been straight-up misled by tobacco manufactures and even physicians, anyone who grew up after 1990 was well-acquainted with the risks and made a relatively informed choice about whether or not to roll the dice.

Although smoking has been tied to myriad health problems—including heart disease, fertility issues, and early mortality—the most famous one by far is lung cancer. If you were paying attention during health class or just tuning into TV commercials, you got the message: Smoke and you risk getting lung cancer. Naturally, most people assumed that the reverse—don't smoke and you won't get lung cancer—was also true. It's not.

While cigarette smoking is by far the leading cause of lung cancer, an alarming number of non-smokers get lung cancer each year. In 2018, as many as 20% of people who died from lung cancer had never smoked.

Meanwhile, women younger than 55 (whether they ever smoked or not) are now more likely than young men to develop lung cancer. And no matter their age, more women die from lung cancer than breast cancer or any other type of cancer.

Dr. Gomez is quick to point out that avoiding cigarettes is still the best way to protect yourself. "The vast majority of never-smokers will never get lung cancer," he says. Unfortunately, there's still a sizeable minority who do, including the following three women.

In 2015, Gina Hollenbeck was at the peak of her physical health—or so she thought. When she wasn't busy working as a nurse in a surgery center or directing a nonprofit, she was running half-marathons or playing competitive tennis. Yet when she developed a cough that wouldn't quit, she started to get suspicious.

"My doctor told me it was seasonal allergies and put me on Allegra, which made sense at first," Hollenbeck, who lives in Memphis, tells Health. But she kept coughing, so she saw an ENT and was diagnosed with acid reflux. Again, that seemed plausible, but medication designed to control acid didn't help, either. Around the same time, Hollenbeck—who was already slim—started losing weight.

"Between the weight loss and the frequent coughing, my abs were looking good," she jokes, "but I knew something was wrong." Around the same time, she developed intense pain in her shoulder blade, but she assumed she had strained something during a workout. An orthopedist prescribed muscle relaxers.

"Finally my cough got so bad, I called a friend who worked at an imaging center and asked her to get me in for a chest X-ray. I didn't know if I had pneumonia or what, but something was clearly wrong and no one was doing anything about it," she says. Almost immediately, the radiologist told her she needed to get to a pulmonologist. When she called to make that appointment, she was told there was a two-month wait for new patients. When Hollenbeck insisted it was an emergency, the receptionist told her to go to the emergency room. So she did.

With a copy of her chest X-ray in hand, Hollenbeck headed to the ER. "Fortunately the ER doctor took me seriously. He ordered a CT scan, which showed that I had tumors in my lungs," she says.

Hollenbeck was stunned by her diagnosis of stage 4 lung cancer. "I remember telling the doctor that I had heard of people getting lung cancer who don't smoke, but I ate organic!"

Although Hollenbeck will never be cured, targeted therapy and brain surgery (to remove cancer that had spread to her brain) have kept her faring well most of the time. She still plays tennis, and she now serves as the president of ALK Positive, a support and advocacy group aimed at spreading the word and raising money to conduct research on people whose lung cancer is connected to an ALK-positive gene mutation.

"We want to spread the word about early detection, and we want biomarker testing for all patients who are diagnosed with lung cancer so that they can get the right treatment," she says.

Felicia Gilchrist was at her job as a customer service manager in Denver when she started feeling like a bad cold was coming on. She stuck it out until lunchtime and then decided to pop in to the urgent care facility across the street. The nurse checked her vitals and was shocked to see that Gilchrist's oxygen level was only 30%. (Normal is 95-100%.) The nurse called for an ambulance, and Gilchrist spent three days in the ICU.

In the hospital, Gilchrist was diagnosed with high blood pressure and pulmonary edema; doctors drained fluid from her lungs and sent her home with an oxygen tank that she was told she'd need for a few weeks. Yet months went by—during which she saw a doctor several times—and she wasn't improving. "I would feel short of breath when doing something simple like trying to put my shoes on," she tells Health.

Finally, in February 2017, she marched into her doctor's office and demanded some answers. The doctor ordered a CT scan and found a tumor and lesions on both lungs. She had stage 4 lung cancer.

Gilchrist, who had never smoked and whose genetic tests didn't reveal any abnormalities, is mystified as to why she got lung cancer. She even has an identical twin sister who's perfectly healthy.

Her doctor prescribed aggressive chemotherapy plus radiation, and Gilchrist's journey hasn't been an easy one. She's landed back in the hospital several times with rhinovirus, a blood infection, and several bouts of pneumonia. She also lost much of her hearing in one ear (a chemotherapy side effect); she now wears a hearing aid.

Recently, she learned that the cancer spread to her brain. She's currently participating in a clinical trial of an oral medication and is hoping to qualify for a second study.

Despite her ordeal, Gilchrist remains positive. "I'm very blessed and very thankful," she says, noting that she has a great support system of friends, family, and co-workers. She went back to work full-time last spring. "Work keeps my mind off things," she says. "Sometimes, they have to make me go home!"

Gilchrist has also become active in her local chapter of the Lung Cancer Research Foundation. She especially enjoys walkathons, because she thinks it's important to remind people that "cancer isn't always pink," she says. "My motto is, 'Can't stop, won't stop. You can let the fear take over but I won't. I didn't come this far for it to knock me down."

Courtney Cox Cole was an athlete most of her life: In college she played basketball and golf, and in her 30s and early 40s she ran several mini marathons and mini triathlons. In January 2014, when she was 42, she ran her first full marathon. A few months later, she found out that she had stage 3 lung cancer.

Cole, who lived in Indiana, didn't experience any breathing trouble; it was severe pain in her shoulder that initially prompted her to visit the ER.

"Courtney never smoked, and we didn't group up with smokers in the house," her sister, Monica Peck, tells Health. "We did a radon check in her house and office after she was diagnosed, and nothing came back high. It was a shock to all of us." Cole later tested positive for a mutation to the EGFR gene.

After completing chemotherapy, radiation, and surgery to remove a portion of her lung, Cole continued taking daily medication and poured herself into lung cancer awareness and fundraising efforts. She managed to raise more than $20,000 for the American Lung Association. In May 2018, the Indiana chapter recognized her achievement by giving her the first-ever LUNG FORCE Impact Award.

Cole especially enjoyed participating in the Fight for Air Climb, one of the American Lung Association's signature fundraising events, during which she climbed 47 flights of stairs in one of the tallest buildings in downtown Indianapolis.

That was before the cancer returned: It spread to Cole's bones and right bicep, and she was diagnosed with stage 4. She passed away earlier this year in September.

Last year, toward the end of Courtney's life, Peck joined a team of Courtney's supporters who banded together to raise money and complete the 2018 Fight for Air Climb in her honor. "She was always very positive and trying to change things," says Peck.