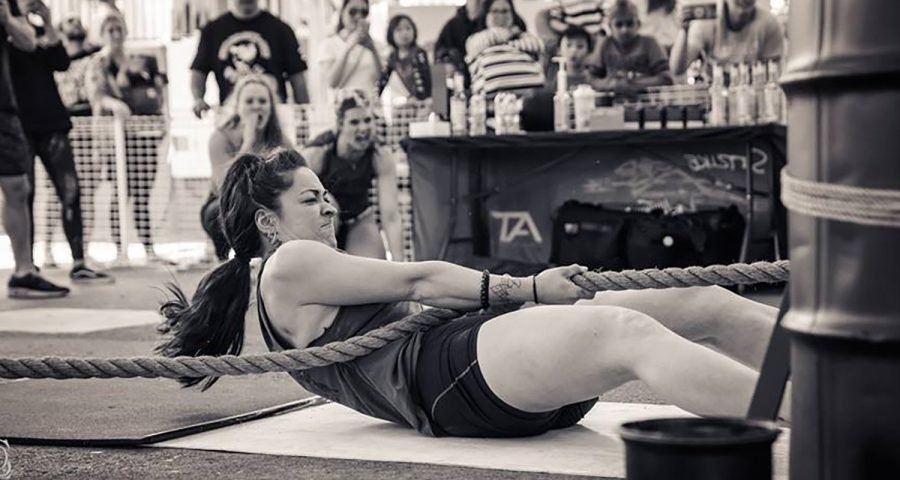 Meet Mariko “Mari” Whyte. The 27-year-old fire-twirler (#legit) from Melbourne competing in the strongman competition at this year’s Arnold Sports Festival Australia on the weekend.

Just a few jaw-dropping stats before we get into our chat. Mari can squat 145kg(!), deadlift 155kg(!!) and stone lift 110kg(!!!). And now with that impressiveness out of the way, let’s get to know the woman who could probably squat your boyfriend.

WH: I know the first reaction of a lot of readers will be a “huh?!” when they hear the word “strongman” and the fact that women can compete in the sport. How do you explain it?

Mari: I say it’s the best sport! It’s so fun and by far the most challenging one mentally and physically I’ve come across. I explain to them that I compete in the “Strongman Sport” but I am a “Strongwoman”. Most people don’t question it too much after I say that. But they do look at me like “Ah, that’s pretty cool, I’ve never heard of the sport or ever seen women do it before”. I tell them it was originally just a male dominated sport but these days the number of women competing in the sport is roughly 50 per cent. The movement of women in sport, and strength sports especially, has been huge! I explain the sport as an entertainment sport, it’s exciting ’cause it’s dangerous and requires a lot of crowd involvement to pump up the competitors. That’s why people love it so much, there so much electricity in the crowd and high vibes even amongst the competitors.

[WH note: look out for her upcoming Strong Women Web Series, which showcases women in the sport. She’s also started a Sisters in Strength initiative with fellow athlete Kerryn Siems to encourage more women to get involved.]

WH: What’s the weirdest question you’ve been asked about strongman?

Mari: In terms of strongman, I think the weirdest thing I’ve ever been asked was from a girl on Instagram if I could squat her boyfriend. I said, “I probably could”. But I’ve never had anything too weird other than questions to do with my body shape, like “How’d you get your butt so big?” by women, and from men, “Can we swap legs? Yours are huge I’m so jealous”. To the women I tell them it’s from lifting heavy, always pre-activating the muscle prior to exercise. I’ve always had strong legs from sprinting but they just grew when I started lifting weights. To the guys, I laugh with them and tell them they need to work harder.

The weirdest thing I've ever been asked was from a girl on Instagram if I could squat her boyfriend. I said, "I probably could."

WH: Was there a moment during your training or in a competition, where you really surprised yourself, and thought, wow, I can’t believe I actually did that?

Mari: All the time! I’m constantly surprising myself with lifting and strongman. There’s that many moments it’s hard to just pick one. My very first strongman competition was on January 9, 2017, Victoria’s Strongest Man & Woman. It was held at Iron Revolution Gym and I came second-last. One year later, I came first, which was a huge surprise and proof of what you can achieve if you really invest 100 per cent in yourself. It felt incredible uplifting with all my friends and family watching me in person I couldn’t believe I had actually done it.

WH: I hear that you were first into bodybuilding before strongman. Why do you make the switch?

Mari: Yes, bodybuilding was a big part of my life once upon a time. I was never into it at first but a girlfriend who was teaching me about lifting weights convinced me to give it ago. I found bodybuilding was hard on the mind and soul. It brought up insecurities of body image and I developed an eating disorder, bulimia, for several months. A serious eating disorder marked by bingeing, followed by purging to avoid weight gain. This developed about three to four weeks before my first bodybuilding show. I knew something was wrong and I could remember feeling myself slip away from me but I didn’t do anything to stop it. I just thought I was weak compared to the other girls who seemed to be doing so well with their diets and prep. After the bodybuilding competition I gained so much weight, not knowing how to control myself with food, and felt out of control of my life.

When I made the switch to powerlifting, I loved how much the focus was on technique and your raw strength each week. I trained with a bunch of amazing guys who showed me the ropes and I didn’t feel judged by the way I looked. It helped me heal my self-confidence and create a better relationship with food. Early on in my prep to my first powerlifting competition my coach at the time mentioned strongman to me. I had never heard of it as a sport you could just do, it was so much fun I felt hooked after my first session. Just felt like a bunch of mates hanging out lifting and laughing together.

I struggled to breathe as [the 110kg Atlas stone] was crushing my sternum pretty bad!

WH: When you made the switch, did you ever think that you’d be competing at the Arnold Sports Festival?

Mari: The hardest thing I’ve ever lifted was by far the 110kg Atlas stone in the USA in 2017. I grinded for so long trying to lap it onto my legs. I finally got it there but then trying to get it over the high bar killed me. I struggled to breathe as it was crushing my sternum pretty bad! I still have the video on my Instagram bent over in pain struggling to catch a breath with the judges around trying to see if I was OK.

I was so worried that I’d done some damage, as the two women before me had both injured themselves: one dropped the stone on her foot and the other lady had smashed her chin into the stone as it fell down. They had to clean up the blood before It was my turn, that was definitely the hardest thing I’ve lifted.

WH: What’s the most empowering thing about competing in strongman?

Mari: The most empowering thing about competing in strongman is the overwhelming feeling of joy and acceptance. Your celebrated for who you are and how much raw grind you put into every lift. Everyone can see if you’re trying your absolute best, even if you don’t get the rep you’re celebrated for you doing your best. It’s a huge confidence booster to understand yourself and learn to let go and accept yourself. You’re doing your best and that’s all they can ask for, and it’s always enough.

Some more fun empowering things about strongman is the fact that we get to say “I’ve flipped a car, or I’ve pulled a six-ton truck, or I lift atlas stones for fun” It’s the best novelty.

To see Mari in action, check out the Arnold Sports Festival Australia, March 15-17, at the Melbourne Convention & Exhibition Centre. To support Mari and find out more about other Aussie strongwomen, follow them on Instagram.

If you or someone you know needs support for an eating disorder, call The Butterfly Foundation’s National Helpline on 1800 334 673.

Discover what the Women’s Health initiative WinS is and how you can get involved here.