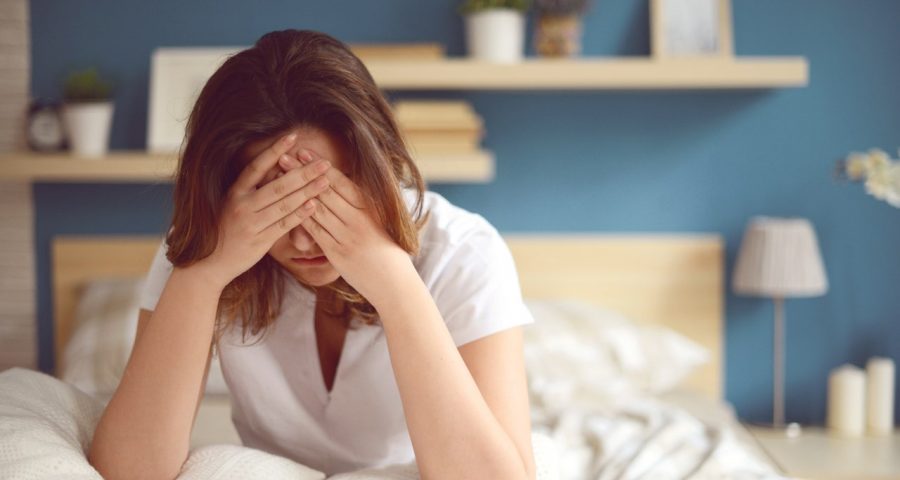 On October 1, about halfway through her third pregnancy, Chrissy Teigen revealed she had lost her baby boy due to bleeding complications, sparking another national conversation about pregnancy loss. “We were never able to stop the bleeding and give our baby the fluids he needed, despite bags and bags of blood transfusions. It just wasn’t enough,” the 34-year-old shared on Instagram.

According to the Office on Women’s Health, pregnancy loss occurs in as many as 10 to 15 percent of confirmed pregnancies. A pregnancy that ends on its own within the first 20 weeks of gestation is called a miscarriage.They often happen early on in a pregnancy, before a person knows they’re pregnant. But even if it’s early, miscarriage can be traumatizing for a pregnant person. And while it may not be easy to talk about, experts say it’s important to seek support in the process, as a miscarriage can have both a physical and emotional impact.

Who is most at risk for miscarriage?

While miscarriage is relatively common, it’s more likely to occur when certain risk factors are present, such as advanced maternal age and medical conditions including infection, thyroid and immune system disorders, uncontrolled diabetes, congenital heart disease, and certain lifestyle factors including alcohol or drug use.

Lauren Bishop, a fertility specialist at Columbia University Fertility Center in New York, says the most common cause of miscarriage is a genetic problem with the baby. The most common time to have a miscarriage is during the first trimester (or the first 13 weeks) of a pregnancy, Bishop says, and many miscarriages occur around five weeks, when a person might not yet know they’re pregnant.

In general, according to Bishop, the risk for a miscarriage decreases once doctors detect a heartbeat, usually around six weeks, and the risk continues to go down each week of the pregnancy.

What happens when you have a miscarriage?

A pregnant person can find out about a miscarriage one of two ways: through spontaneous bleeding, or during an ultrasound when a doctor can’t find a heartbeat. In the latter case, Bishop says, a pregnant individual may opt to have a procedure called a dilation and curettage (D&C), during which doctors remove the tissue from inside the uterus.

The main medical risk of miscarriage is bleeding. “If the bleeding becomes extremely heavy, then they could be at risk of having anemia, lightheadedness, or fainting,” says Bishop. “That’s pretty uncommon, but it is a risk.”

What are the potential emotional and physical side effects of a miscarriage?

Rayna D. Markin, an associate professor in counseling at Villanova University in Pennsylvania who specializes in pregnancy loss, says research shows miscarriage can have a profound emotional impact on parents, including symptoms of depression, anxiety, trauma-like symptoms including PTSD, and low self-esteem.

Psychologist Janet Jaffe, co-founder and director of the Center for Reproductive Psychology in San Diego, says miscarriage can also cause medical trauma, due to pain or bleeding, and social trauma, since the experience often triggers difficulty relating to others and feeling misunderstood.

Misty Richards, a psychiatrist and perinatal health expert at Resnick Neuropsychiatric Hospital at UCLA, says miscarriages often trigger feelings of inadequacy or guilt. “People may think they weren’t good enough to hold onto the baby, or that it’s their fault,” she says.

Certain contexts and life experiences can intensify miscarriage-related distress. Richards says miscarriage may feel more traumatizing if someone is going through fertility treatments like IVF, which can be costly, time-consuming, and taxing on the body. Multiple past miscarriages, advanced maternal age, and pre-existing depression or anxiety can also make miscarriage more difficult to manage.

How can a person going through a miscarriage take care of themselves?

Talking about loss is hard in general, and our culture doesn’t make it easy to talk about miscarriage, which Markin says can cause people to feel alone in their grief or misunderstood. “A lot of people don’t understand the way it impacts parents or they don’t know how to respond,” Markin says. “We don’t really have a script in our society for what to do or say when there’s a pregnancy loss like we do with other kinds of losses.”

That’s why, if you’re going through a miscarriage, it’s so important to lean on people you trust — loved ones who will empathize with you in your loss. Avoid people who invalidate your experience: Markin says it’s common for well-meaning individuals to make cliched comments that may invalidate their pain, like “this happens all the time” or “you’ll get pregnant again,” which she says can be a bit like rubbing salt on a wound. “It’s important for people to find at least one person they feel understood by and supported by,” she says.

You may also need to educate others on what you need, which could be as simple as saying, ‘I know you want to help me focus on getting pregnant again, but what I really need is someone to just listen.’ However, she acknowledges that may be easier said than done. “That can be hard when you’re in pain, but it’s important to advocate for yourself,” Markin says.

How can you support a person experiencing a miscarriage?

People going through miscarriages often feel isolated and, according to Richards, social support is an important ingredient for healing. When someone you know is going through a pregnancy loss, do whatever you can to validate their experience.

Start by recognizing and accepting the pain that comes with miscarriage. “We tend to view miscarriage through a medical and not emotional or psychological lens,” Markin says. “Parents in that position are grieving the loss of the baby but also the loss of hopes for the future.”

There’s no perfect way to support a grieving parent, but Richards says it’s important to reassure them it’s not their fault, there’s nothing they could have done to change the circumstances, and that they’re not alone on the journey.

Not sure how else to offer tangible support? Markin suggests directly asking the person what they need, and don’t try to take away their pain. Instead, focus on being a supportive, understanding presence for the long haul. Jaffe also suggests making note of the miscarriage anniversary and checking in with your loved one. Everyone grieves at their own pace, and there’s no right or wrong way for a person to express their pain.

“It’s not like people can’t grow from the experience or that they will feel it for the rest of their lives,” Jaffe says. “But there will be moments where the grief comes back, and you feel it, like any loss.”