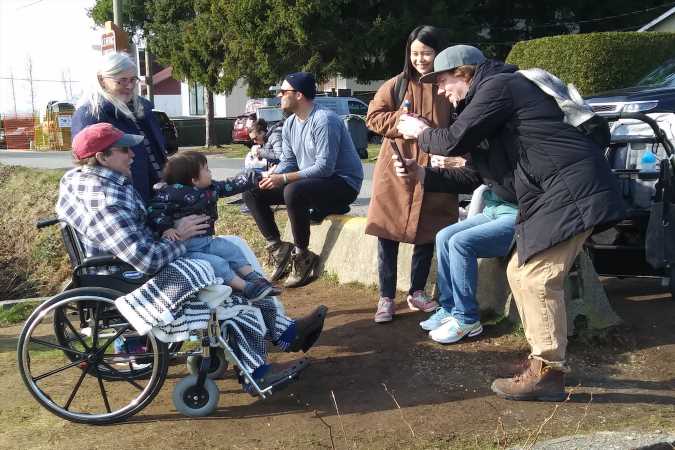 BLAINE, Wash. — In the shadows of covid travel restrictions, a 42-acre park on the far western edge of the U.S.-Canadian dividing line has become a popular opening in an otherwise closed border, a place where Americans and Canadians can gather without needing permission to go through an official border crossing.

What is known as Peace Arch Park has lush green lawns, gardens and a 67-foot-tall white concrete arch erected in 1921 that spans the border. It’s an often muddy, sometimes idyllic place. But the pandemic has transformed this patch of historically neutral ground into a playing field for some fundamental public health questions.

Should people from Canada, which has a lower incidence of covid-19, risk mingling with people from the U.S.? Should families who’ve masked and distanced be able to reunite for a day without quarantining? Who decides?

On a recent sunny weekend, couples and groups of up to 15 people spaced themselves across a large central lawn and filled a dozen or so picnic tables. Some kept their distance of several feet, others huddled closely. Some wore masks, others didn’t. Sounds of laughter came from kids on the large playground. And all was quiet on the eastern edge of the park, where visitors had pitched dozens of tents, rumored to facilitate conjugal visits.

An American park ranger periodically made rounds and asked groups to stay physically distant from one another. Though dozens of surveillance cameras on tall poles kept watch throughout the parking lot, no police were in sight.

Canada closed its land borders a year ago to all but some select groups, and its side of the park has stayed shut since late June. Even so, Canadians can freely hop across a small grass ditch that runs along 0 Avenue in Surrey, British Columbia, and Washington state’s side remains open after a brief closure earlier in the pandemic.

That’s far different from the conventional passage through an immigration site like the one near the park, where anyone driving into Canada must sign up for a strictly enforced 14-day quarantine.

And most Americans need to be in an exempted group and have a negative covid test. Those who claim “family relationships” must be able to prove it to a border official. And, even then, they have that 14-day quarantine.

Immigration lawyer Len Saunders, who lives in Blaine, Washington, comes to the park most days to see his clients. “For many people, it’s a lifeline,” he said. “Without the park, people would be effectively separated from their spouses, fiancés and partners.”

He has two clients in that situation: Canadian Katrina Gurr, 29, and American Alexis Gurr, 32. They each live within an easy drive to the border and met online last March. “We just started talking, and then couldn’t stop,” said Alexis.

They married in July and today sometimes talk in unison. 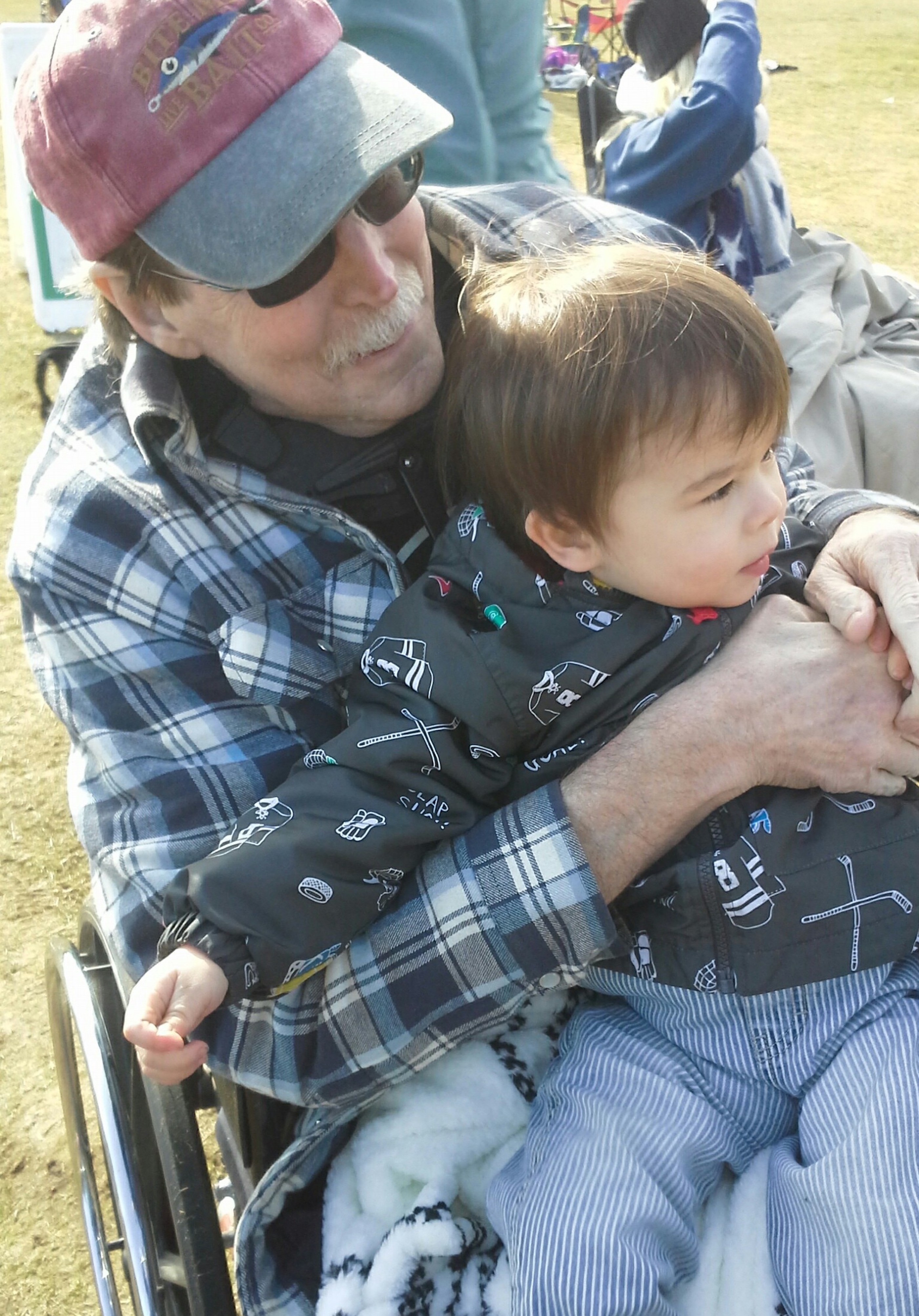 The rules for travel are complex and changing, laxer for entering the U.S. and for air travel into Canada but still daunting. The Gurrs have visited each other for weeks-long stretches, but have spent most of their first year as newlyweds apart. Katrina has applied for a green card that would allow her to live and work in the U.S., a process she expects will take about a year.

In the meantime, Katrina walks across the ditch one day most weekends. Alexis brings a tent and a small propane tank.

“During football season, we watch the football game,” Alexis said.

“And we nap a lot, actually,” said Katrina, finishing her wife’s sentence.

For the Zuidmeer family, Peace Arch Park was a place to reunite. Father Bill and mother Denise traveled there many times in the past few months from their home 7 miles south to see their son, Peter, and his wife and child, who live north of the park. The visits became particularly important after Bill was diagnosed in December with terminal kidney cancer.

But what became Bill’s last visit to the park was nearly a failure. The rules in Canada had changed — the Mounties warned Peter that to return to Canada he’d need to show his real passport, not just the photo on his phone. The round trip to retrieve it would take an hour and a half. His father was already exhausted from the trip, and Denise needed to return the specialized medical vehicle known as a cabulance she’d rented to get him there.

Denise begged the Mounties for dispensation. For her, this was all about her husband having a chance to have what might be a final reunion, safe because it was outdoors and all involved had been careful about physical distancing. “This isn’t tourism,” she said later. “It’s families.”

The Mounties ultimately allowed Peter across for a brief and emotional hug, and Peter’s 3-year-old got to sit on his grandfather’s lap for the last time.

Bill died at home 12 days later, on March 11, after his son made one last visit the formal way involving a strict 14-day quarantine on his return. 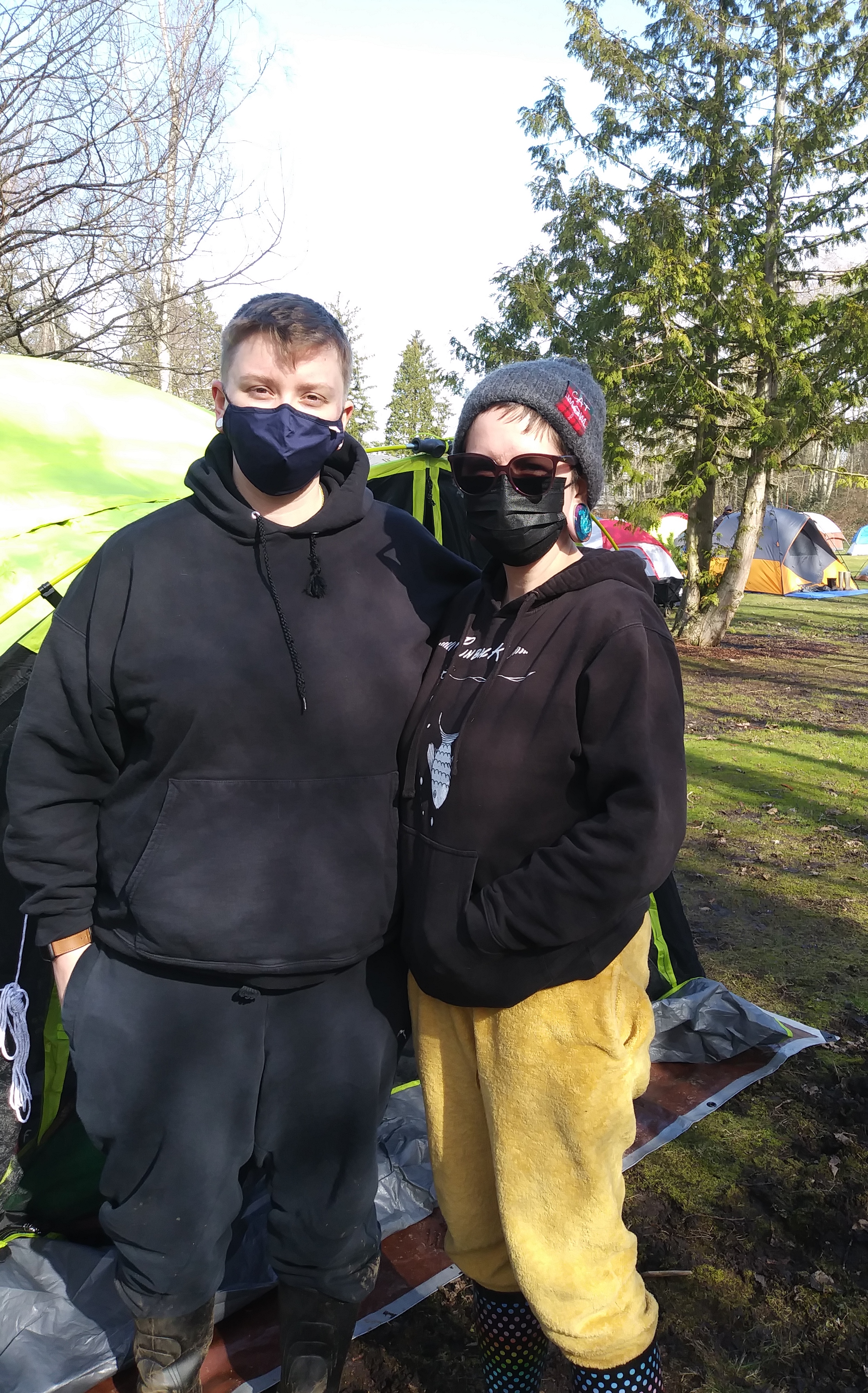 Most of the park reunions are happier. Saunders, the immigration lawyer, said he’s seen a lot of weddings.

Some of the Canadians who live on 0 Avenue or thereabouts object to the gatherings. Canadian John Kageorge is concerned mostly about security issues, people smuggling things like guns or drugs. In addition, he said, “people need to follow public health guidelines, and they are not doing that at the park.”

Fear of covid is prevalent in Canada, so much so that “covid shaming” — social media outing and threatening of covid-positive people — has become fervent, according to The New York Times. And Americans are often blamed. “There’s a big stigma in Canada that you guys aren’t the best,” said Katrina Gurr.

The U.S. has an appreciably higher rate of covid infections and deaths — more than 92,000 cases per million people compared with Canada’s 26,000 per million as of Wednesday. But whether SARS-CoV-2 is being spread outdoors or in the tents of Peace Arch Park is anybody’s guess. After the issue was raised by the Canadian media in February, the British Columbia premier responded that his chief health official had told him no outbreaks were attributable to the park.

The Public Health Agency of Canada attributes just 0.3% of March covid cases to international travel. But that estimate is likely to be low, said Kelley Lee and Anne-Marie Nicol, global health policy experts at Simon Fraser University. In an essay in The Conversation, an online news site, they note that only air travelers are monitored. That leaves out the people in Peace Arch Park and essential workers like truckers and health care workers who regularly drive across the border.

“Essential travelers remain untested so we cannot know what risk they pose,” Lee wrote in an email. 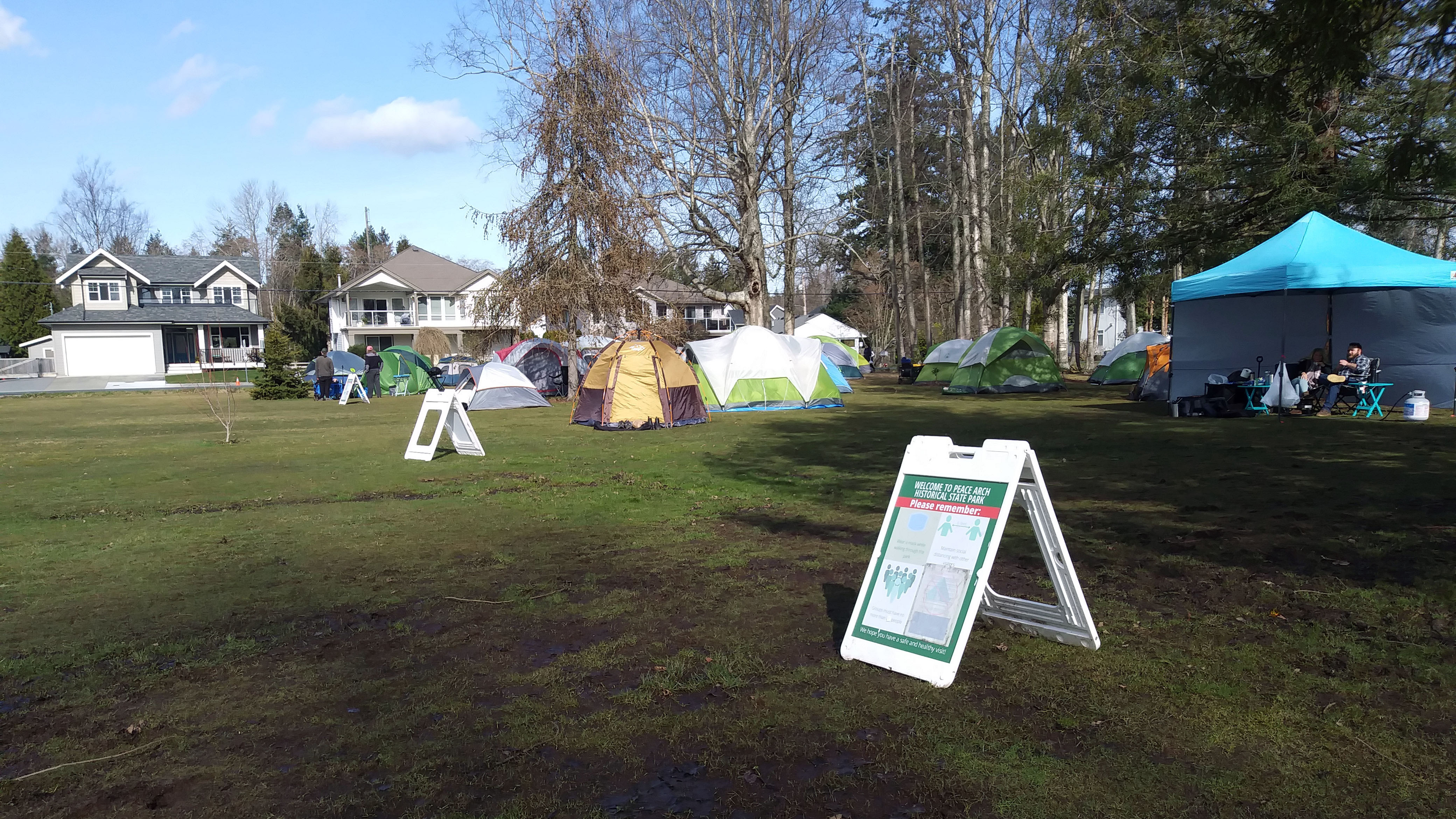 In the absence of clear information about spread, the fight over the park remains a political one. Two Liberal Party of Canada members of the provincial legislature have pressed British Columbia’s premier, a member of the New Democratic Party, to ask Washington Gov. Jay Inslee, a Democrat, to close the American side. But the premier turned them down, saying that international borders were an issue for the federal government in Ottawa.

Inslee spokesperson Mike Faulk said Washington discourages people from gathering but did not indicate any action was imminent. Last October, Prime Minister Justin Trudeau said the border closures would last “as long as we feel that they need to last.”

The Canadian side of the arch says: “Brethren Dwelling Together in Unity.” For now, at least, that’s true in the park, but not along the rest of the 4,000 miles of border between the Atlantic and Pacific oceans. Saunders, the Gurrs and Zuidmeers plus many other border watchers are not expecting any changes soon.