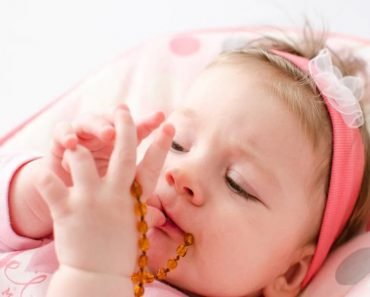 (HealthDay)—Teething jewelry products, such as necklaces, pose significant safety risks and have been tied to at least one baby’s death, the U.S. Food and Drug Administration warns.

Potential threats include choking, strangulation, injury to the mouth and infection. These products should not be used to relieve teething pain in infants, the agency said.

The products also shouldn’t be used to provide sensory stimulation for children or adults with autism, attention-deficit/hyperactivity disorder or other special needs, the agency added.

The FDA said it has received reports of infants and children suffering serious injuries due to teething jewelry, including one death. In that case, an 18-month-old child was strangled by his teething necklace during a nap.

There are various types of teething jewelry, including necklaces, bracelets and anklets, which have beads made with materials such as amber, wood, marble or silicone.

“We know that teething necklaces and jewelry products have become increasingly popular among parents and caregivers who want to provide relief for children’s teething pain, and sensory stimulation for children with special needs,” FDA Commissioner Dr. Scott Gottlieb said Thursday in an agency news release.

“We’re concerned about the risks we’ve observed with these products and want parents to be aware that teething jewelry puts children, including those with special needs, at risk of serious injury and death,” he said.

Consumers should “consider following the American Academy of Pediatrics’ recommendations of alternative ways for treating teething pain, such as rubbing inflamed gums with a clean finger or using a teething ring made of firm rubber,” Gottlieb advised.

“Given the breadth of the market for these teething necklaces and jewelry, we’re sharing this important safety information directly to consumers in order to help prevent injuries in infants and kids,” he added.

Choking can occur if the jewelry breaks and a small bead winds up in the child’s throat or airway. Strangulation can occur if a necklace is wrapped tightly around the child’s neck or if the necklace catches on an object, such as a crib, the FDA said.

In addition, injury to the mouth or infection can occur if a piece of the jewelry irritates or pierces a child’s gums.

Another potential hazard is a substance called succinic acid that’s in amber teething necklaces. Manufacturers claim that this substance, which may be released into an infant’s bloodstream in unknown amounts, is an anti-inflammatory and relieves teething and joint pain. But the FDA said those claims have not be evaluated for safety or effectiveness.