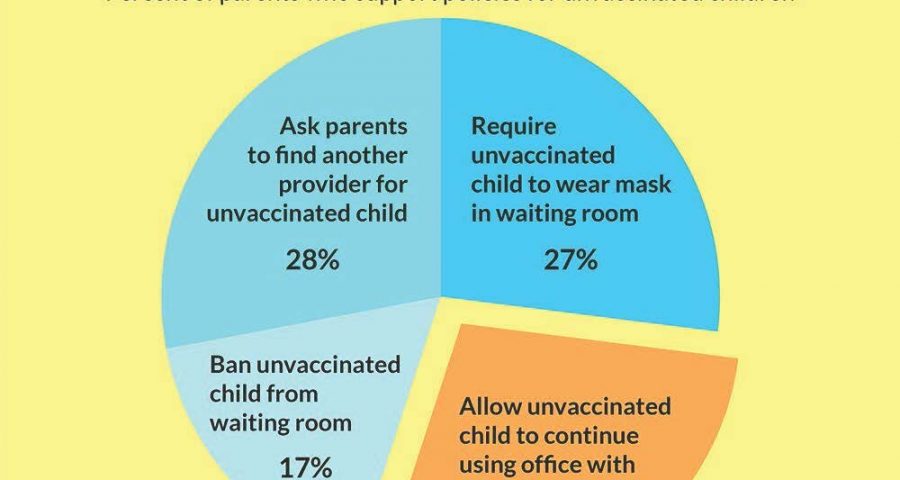 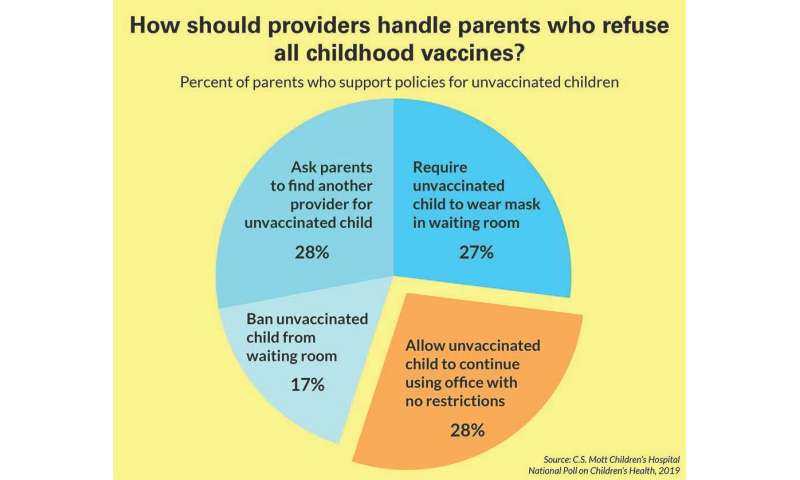 Four in 10 parents say they are very or somewhat likely to move their child to a different provider if their doctor sees families who refuse all childhood vaccines, according to a new national poll.

Most American children receive recommended vaccines protecting them from dangerous illnesses like measles and whooping cough.

But doctors sometimes care for children whose parents refuse vaccines against providers’ recommendations. And that is not news many parents of vaccinated children want to hear, suggests the C.S. Mott Children’s Hospital National Poll on Children’s Health at the University of Michigan.

Three in 10 parents polled say that their child’s primary care office should ask parents who refuse all vaccines to find another health provider.

“A completely unvaccinated child is unprotected against harmful and contagious diseases, such as measles, pertussis and chicken pox. Children who skip vaccines also pose a risk of transmitting diseases to other patients. This can be especially risky exposure for vulnerable populations, including infants too young to receive vaccines, elderly patients, patients with weakened immune systems or pregnant women.”

The report is based on responses from 2,032 parents of at least one child 18 or under.

The poll also found that many parents are unaware of policies in their child’s primary care office regarding unvaccinated children.

Thirty-nine percent of parents say their provider has a policy requiring children to get all recommended vaccines and 8% say children are required to get some vaccines. Another 15% of parents say their child’s primary care provider’s office has no policy about vaccination while 38% don’t know if one exists.

Parents are also divided in their views on what those policies should be and whether parents should be notified that there are children in the practice whose parents have refused all vaccines.

Typically, Clark says, child health providers will have multiple discussions with parents to explain the importance of childhood vaccinations, and to answer any questions the parents have about possible side effects.

“Providers usually do their best to address any concerns parents may have related to hesitancy about vaccines,” Clark says. “In addition to explaining how vaccines protect the health of the child, providers also may share information about why an unvaccinated child exposes other children and patients to dangerous health risks too.”

The majority of U.S. children receive all vaccines recommended by the Centers for Disease Control and Prevention (CDC). Vaccines often are given in conjunction with well-child visits with the primary care provider.

Barriers in scheduling appointments or parents’ awareness about recommended vaccines may cause children to experience delays in vaccination or to miss some vaccines. A less common situation—but increasing in recent years—is parent refusal of all vaccines for their child.

Clark says the recent measles outbreak highlights the need for both parents and health care providers to consider policies around unvaccinated children. The highly contagious measles virus can live for several hours in an area where an infected person coughed or sneezed. However, people can spread the disease even before symptoms appear.

When parents bring a child with suspected measles to the waiting room of a doctor’s office or emergency room, Clark says, they may expose many other patients to the disease.

“Parents may assume that when they take their child to the doctor, they are in a setting that will not expose their child to diseases. Parents may not have considered that there could another child in the waiting room whose parents have refused all vaccines,” Clark says. “When prompted to think about it, most parents want the doctor’s office to have some policy to limit the risk from unvaccinated children.”

“Primary care providers need to think carefully about whether to institute policies to prevent their patients from being exposed to vaccine-preventable diseases, and then communicate those policies to all patients in their practice,” she adds.