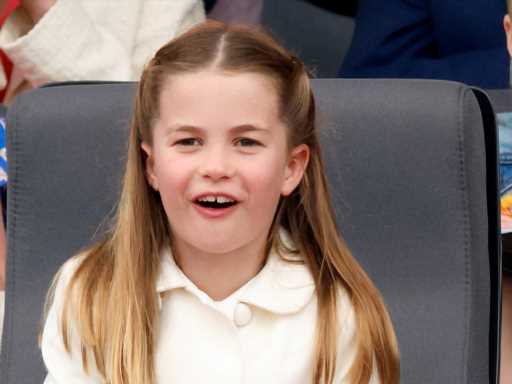 Princess Charlotte looks so grown up in this new video with her dad! The duo shot a short message for the Lionesses, England’s women’s national soccer team, wishing them lots of luck on their big tournament, which took place July 31.

“We both want to wish the Lionesses the best of luck tonight, you’ve done amazingly well in the competition and we’re rooting for you all the way!’” Willam said. Charlotte added: “Good luck! I hope you win. Bye!”

Charlotte is a bit of a soccer player herself. During a chat with the Lionesses in June, Prince William told the athletes that his 7-year-old really knows how to kick around the ball. “Charlotte wanted me to tell you that she is really good at goal,” William said, per Hello! “She said, ‘Please tell them that.’ She’s a budding star for the future.” In return, the team gifted William with jerseys for all his children which had their names across the back and their ages. How sweet!

The princess is a royal with many talents. When she’s not playing soccer, she’s reportedly quite good on the slopes. The whole family headed to the French Alps over the Easter holidays and Charlotte was apparently tearing through the snow.  “Charlotte was racing down the mountain by the end of the holiday. She’s fearless!” a source told Us Weekly. “George was slightly more cautious, but they’re both great skiers and competed in fun brother/sister ski races. They had an absolute blast.”

Oh yeah, and she’s also known for making a mean pasta. During a visit to London’s Lavender Primary School for Children’s Mental Health Week, Kate Middleton mentioned the treats that her kids whip up for her in the kitchen. “She was telling us how much her children love cooking and how they cook for her,” Matthew Kleiner-Mann, chief executive of the Ivy Learning Trust, told reporters, per PEOPLE. “They made cheesy pasta the other day. One stirs the flour, one puts the milk and butter in. And they make salads and stuff.”

We can’t wait to see Charlotte continue to tackle the soccer field and so many more exciting adventures!

These famous moms love wearing matching outfits with their kiddos.