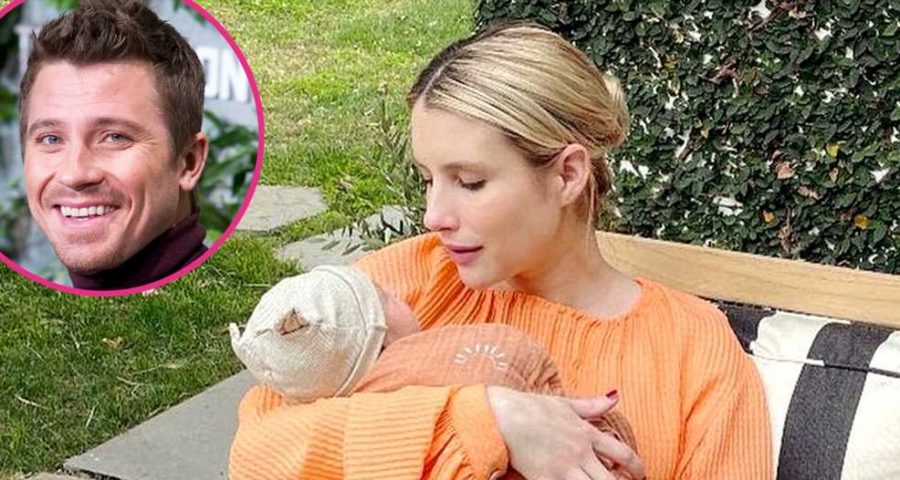 Emma Roberts returned to Instagram for the first time since giving birth to share a sweet photo of her son with boyfriend Garrett Hedlund.

“Thank you 2020 for getting one thing right,” the 29-year-old captioned a photo that showed her sitting outside cradling her newborn on Tuesday, January 12. “Our bright light Rhodes Robert Hedlund.”

The Scream Queens actress wore an orange Stella McCartney minidress and matching Andrea Wazen slides for the pic while her baby boy was swaddled in a color-coordinated wrap with a cream Babe & Tess cap.

Roberts and Hedlund reportedly welcomed their baby boy, who weighed a whopping 9 pounds, on December 27.

Us Weekly broke the news in June that the American Horror Story alum was pregnant with her and the Tron: Legacy star’s first child.

Roberts’ mom, Kelly Cunningham, confirmed the pregnancy hours later, writing on Instagram that she was “very excited” to become a grandma.

The couple and their families felt “surprised, shocked and happy at the same time,” over the pregnancy, a source told Us in July.

Another source exclusively told Us earlier this month that Hedlund, 36, and Roberts were loving life with their baby boy. “Both parents are thrilled and mother and baby are doing well,” the insider told Us on January 4.

Roberts revealed to Cosmopolitan in November that she feared she wouldn’t be able to get pregnant due to her endometriosis.

“I was told, ‘You should probably freeze your eggs or look into other options,’” the Scream 4 actress explained. “I did freeze my eggs eventually, which was a difficult process. … It sounds cheesy, but the moment that I stopped thinking about it, we got pregnant.”

The Mosaic actor and Roberts were first linked in March 2019. “Garrett and Emma have been friends, but this is new, casual and just a couple of weeks old,” a source exclusively told Us at the time. “They are having fun and enjoying each other.”

Us confirmed their relationship after the Unfabulous actress ended her on-off engagement to Evan Peters. The pair had started dating in 2012 after costarring in Adult World.