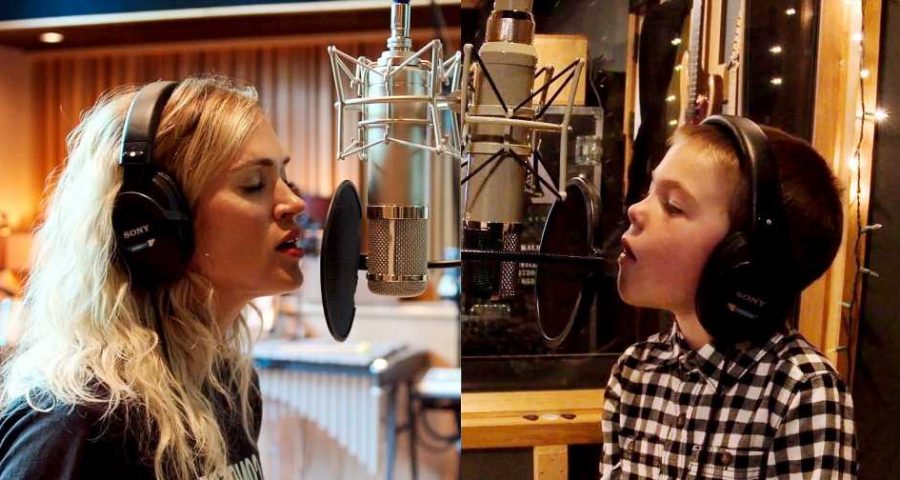 In the recording studio! Carrie Underwood’s 5-year-old son, Isaiah, made an adorable appearance in My Gift: A Christmas Special From Carrie Underwood, which dropped on HBO Max on Thursday, December 3.

The country singer, 37, and Mike Fisher’s eldest son rocked a large pair of headphones and a plaid shirt while singing his part in his and Underwood’s “Little Drummer Boy” duet.

The Oklahoma native, who also shares son Jacob, 22 months, with the former professional ice hockey player, 40, gushed in October about Isaiah’s collaboration on her album, which was released one month prior.

Rainbow Babies: Stars Who Had Children After Miscarriages

“He loves to sing, and he has such a giving, loving heart about him,” the American Idol alum told Entertainment Tonight at the time. “I could just hear his voice [in the song].”

The “Love Wins” singer added that he gave the song “his all,” explaining, “It’s so pure, and it’s so special. He’s throwing his hands in the air and [was] just so expressive when he was singing it. I was so proud of him, just for giving it his all and the love in his heart because he does love Jesus. At 5 years old, he knows, and he was giving all the love. I’m very proud of him.”

Underwood joked that she could see the little one critiquing his performance the first time he heard it. “I’m like, ‘That is me in you for sure,’” she joked.

The Grammy winner posted an Instagram photo of her and Isaiah in the studio on Tuesday, December 1. “So happy we captured the sweetest voice in this special moment in time,” Underwood captioned the sweet social media upload. “My own Little Drummer Boy will be a part of the #MyGift Christmas Special beginning this Thursday on @hbomax! #MyGiftHBOMax.”

While getting ready for the holidays, Isaiah has been hard at work on his Christmas list — and he wrote one for Jacob as well.

“It sounded super sweet when he was doing it,” the songwriter told Jimmy Fallon on Thursday. “For himself, it was mostly like Spider-Man toys or Spider-Man related things. And then on Jake’s, he wrote, ‘random boy toys.’ Like, the words ‘random baby toys.’”