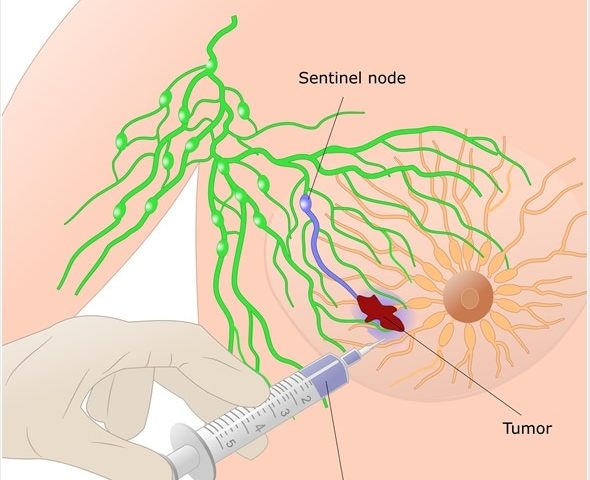 The sentinel node is the first lymph node that filters lymphatic fluid from the tissue surrounding a tumor. As the first node in the lymph circulatory system “downstream” from the tumor, this is more likely to show the presence of migrating tumor cells than any other. 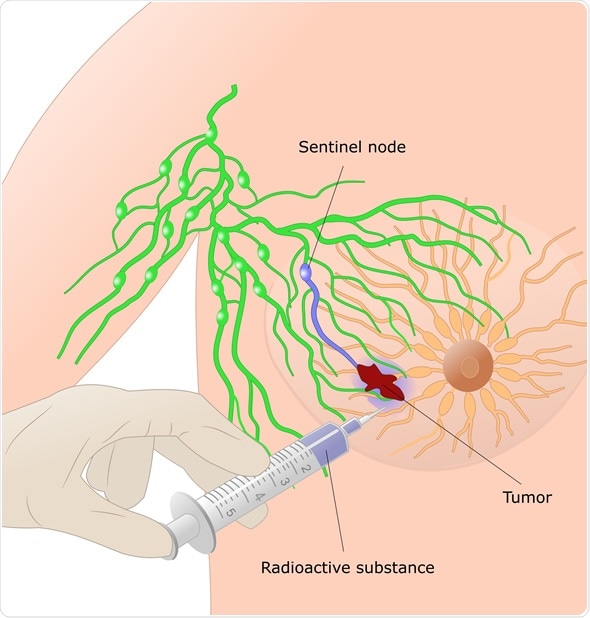 The intention of performing an SLNB is that the removal of just the sentinel node for analysis is an adequate test for the spread of cancer to the lymphatic system. This would be beneficial in terms of operating time, required dissection, morbidity to the patient and time required for healing, as the analysis of several lymph nodes would not be necessary. If the sentinel node tested negative for cancer, it would be likely that others further downstream would also test negative. With this said, the procedure ordinarily involves the removal of a cluster of 2-3 nodes, namely, the sentinel node and those closest to it.

A SNB is usually carried out at the same time that a patient is undergoing surgery to remove the primary tumor. The procedure itself, however, may be done either before or after the tumor removal. It involves the injection of a small amount of a radioactive substance (radioisotope or radiotracer) and/or sometimes a colored dye into the area surrounding the tumor. This travels via the lymph vessels to collect in the sentinel and other lymph nodes. The surgeon uses a scanning device which will either detect radioactivity or the dye in order to locate the sentinel node. After it is found, the surgeon removes the sentinel lymph node via a small incision which is made in the skin overlying the node. The excised sentinel node is microscopically examined for the presence of any cancer cells.

A negative SLNB result could indicates that the cancer has not gained the capability to spread to the lymph nodes and organs, or, in other words, it has not metastasized. A positive SLNB result indicates that cancer is present in the sentinel lymph node and may be present in other nearby lymph nodes (called the regional lymph nodes). This would, of course, mean that spread had possibly occurred to other organs. This result can assist a doctor in determining the stage and extent of cancer within the body so that an appropriate treatment plan can be devised. This might involve more and extensive surgery for the removal of some or all of the remaining lymph nodes, or radiotherapy treatment to sterilize the affected nodes.

Complications of SLNB include lymphedema, the formation of a seroma, pain, tingling or numbness in the arm operated upon, urine discoloration by the methylene blue dye, and in some cases, a recurrence of cancer on the same side despite a negative sentinel node.

SLNB is most commonly carried out in patients with early stage breast cancer, when the tumors are relatively small (less than 50 mm in diameter) and there are no clinically abnormal lymph nodes in the draining area prior to surgery. In these cases, the strategic removal of only one or even just a few of the axilla lymph nodes (under the arm) can enable the accurate assessment of overall lymph node status in women. In fact, there have been studies to show that the removal of the sentinel node alone confer the same odds of survival and of being free of cancer after five years, compared to a more extensive lymph node dissection.

Afsaneh graduated from Warwick University with a First class honours degree in Biomedical science. During her time here her love for neuroscience and scientific journalism only grew and have now steered her into a career with the journal, Scientific Reports under Springer Nature. Of course, she isn’t always immersed in all things science and literary; her free time involves a lot of oil painting and beach-side walks too.