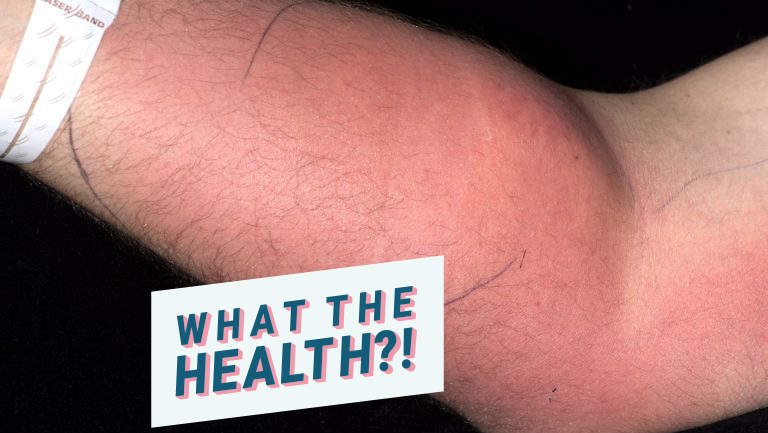 Ah, men. Sometimes we just can’t comprehend what goes on inside their heads. A prime example is the case of a man in Ireland who thought injecting his own semen into his arm would cure his chronic back pain. Yeah, you can’t make this stuff up.

In a new case study published in the Irish Medical Journal, doctors from the Adelaide and Meath Hospital in Dublin say the 33-year-old man injected his own semen into a vein in his arm once a month for a year and a half, or 18 doses total. Where he got the idea that this would cure his back pain is unknown, but he told doctors that he devised the cure without any medical advice.

The man eventually went to the hospital, but not because of his arm. Instead, he complained of “severe, sudden onset lower back pain” that struck after he lifted a “heavy steel object” three days before. During the examination, the doctor noticed his forearm was red and swollen, and, of course, asked the man if he could explain why.

Sure enough, he told the doctor about the home remedy he had been self-administrating for the past 18 months. He also admitted that for his most recent injection, he actually gave himself three “doses” of semen instead of one, injecting both his vein and his muscle.

Believe it or not, the patient opted to leave the hospital without getting the semen drained from his arm. As soon as his back pain improved, he was discharged.

“This is the first reported case of semen injection for use as a medical treatment,” the doctors wrote in the case study, titled “Semenly” Harmless Back Pain: An Unusual Presentation of a Subcutaneous Abscess.

The lesson here is that it’s never safe to inject yourself with anything if you aren’t trained to do so, especially something that has no reason for being injected into the body, like semen. Leave the experimenting up to the medical professionals, and only treat yourself with doctor-approved remedies.