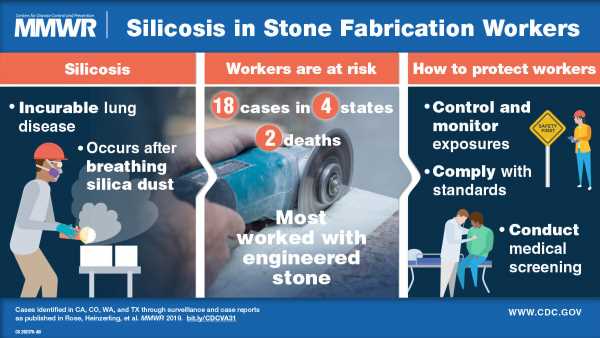 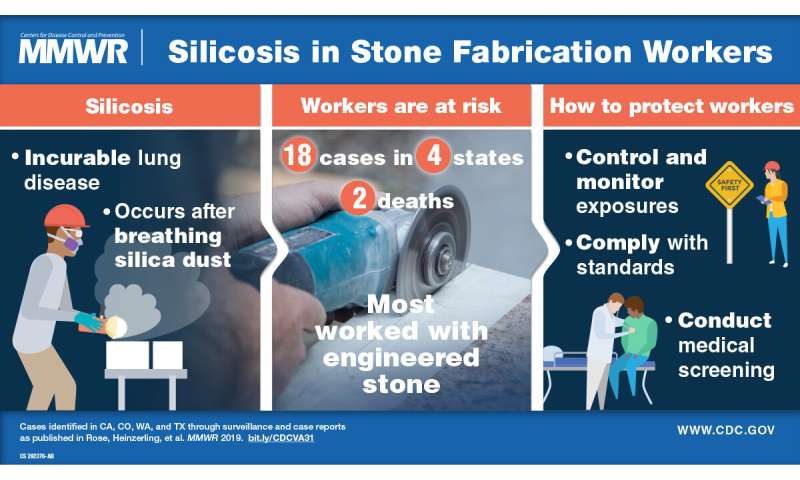 Engineered stone, made of ground quartz and resin, has become a tremendously popular material for kitchen countertops due to its durability, low maintenance and customizable colors and patterns. Workers who form, shape, cut and polish the material, however, appear to be at significant risk of severe and potentially deadly lung disease. In this week’s Morbidity and Mortality Weekly Report, researchers from California, Colorado, Texas and Washington report 18 cases of severe silicosis, and two fatalities, among young, mostly Hispanic men, who worked at engineered stone fabrication plants.

“Engineered stone contains a much higher silica content than does natural stone, posing significant risk to those who handle and work with the material,” said Cecile Rose, MD, MPH, professor of medicine at National Jewish Health and co-author of the study. “We believe there may be hundreds, if not thousands of cases of silicosis among workers in the engineered stone industry.”

Silicosis is an incurable lung disease caused by inhaling particles of crystalline silica. The particles trigger inflammation and scarring in the lungs, leading to progressive, irreversible and potentially disabling and fatal disease. Silicosis patients are at higher risk for autoimmune diseases and lung infections, especially tuberculosis. Engineered stone has a very high silica content, greater than 90 percent, compared to less than 45 percent in granite.

After sensing a rise in silicosis cases among her patients, Dr. Rose reviewed patient files and discovered seven recent cases of silicosis among engineered stone workers in her Colorado practice alone. Public health officials in California, Washington and Texas identified 11 more cases through various surveillance programs. Two of the California cases were fatalities discovered in follow-up investigations of one fabrication plant. Several of the patients with silicosis also had autoimmune diseases, such as rheumatoid arthritis and scleroderma. Two had latent tuberculosis infection.