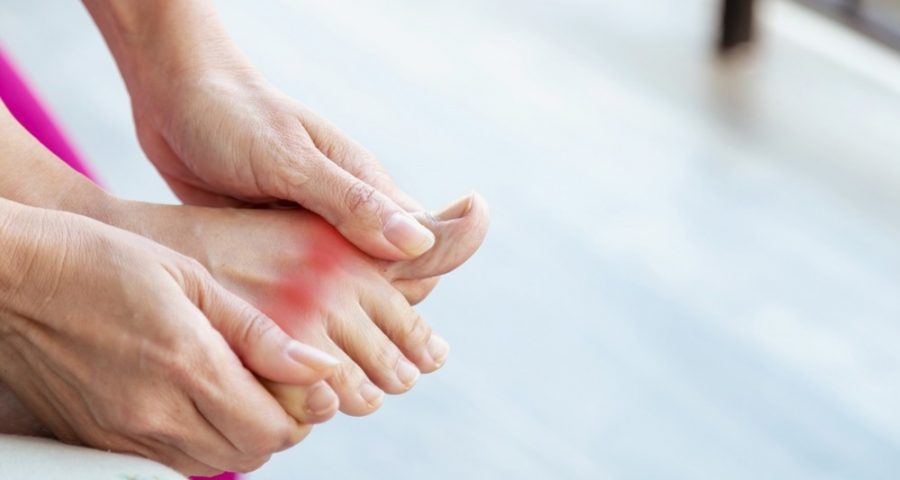 Gout: causal factors and symptoms
Transformation of gout from the disease of kings to a common 21st century disease
Genetic links to gout
Treatment and prevention of gout
References
Further reading

Around 3 million Americans have gout, an extremely painful arthritic condition. Historically, gout was called the “disease of kings” because it was thought to manifest due to overindulgence in food and alcohol. Scientists discovered that although some food products can exacerbate the condition, it occurs due to a higher concentration of uric acid (urate) in the blood, i.e., hyperuricemia. The uric acid crystals accumulate in the joints, which induces inflammation and triggers acute pain.

Gout is a type of inflammatory arthritis which causes swelling, redness of the skin, and extreme pain in the joints of the knees, ankle, and big toes. It can also occur in the wrist, fingers, and elbow. Typically, a “gout attack” occurs suddenly, and the pain increases rapidly.

As stated above, gout occurs when uric acid, circulating in the blood, is deposited in the soft tissues or joints and forms crystals. Gout pain occurs when the body starts reacting to the deposited crystals and causes inflammation.

Naturally, uric acid is produced in the blood. It is also a breakdown product of purines, a chemical in many food products. Typically, uric acids are removed from the body via urine. Gout occurs due to two conditions, i.e., when too much uric acid is synthesized in the body or when the removal capacity of the kidney is compromised. Patients suffering from gout for a prolonged period form nodules of uric acid around the joints, which are known as tophi.

A diet rich in animal proteins, such as pork, red meat, shellfish, and oily fish, which are high in purines, makes an individual susceptible to gout. Additionally, alcohol reduces the metabolism of uric acid and enhances the disease condition. Apart from a high animal protein diet and alcohol consumption, some other factors for gout are family history, diabetes, obesity, kidney disease, chemotherapy, and dehydration.

Gout has been mentioned in ancient Greek history as only affecting rich men. This disease was referred to as the “disease of kings.” Interestingly, when royals like Henry VIII suffered from gout, it became a fashionable condition. It has been documented that some Europeans aimed to get gout as a status symbol.

Although gout was considered a disease of the past, a recent significant rise in cases in the United States has been observed. Scientists stated part of the reason why gout is increasing in America is the obesity epidemic. Gout mainly affects middle-aged and older men. Due to the lack of protective effect of estrogen, postmenopausal women are also susceptible to the disease.

Another common contributing factor that has increased the prevalence of gout in recent times is the usage of diuretics. Diuretics, also known as water pills, are commonly used to control high blood pressure. Transplant recipients are prone to gout, which can be controlled via medication such as cyclosporine.

Scientists have found a genetic link to gout, making some people susceptible to the disease. A large-scale genetic screening linked to high urate levels in the blood led to the discovery of the ABCG2 gene. Initially, it was postulated that the ABCG2 gene functioned as a type of urate pump.

To test this hypothesis, William Guggino and his team at Johns Hopkins University’s School of Medicine used the Xenopus egg system. Interestingly, they observed that ABCG2 pumps urate out of the cell. Mutation of the ABCG2 gene results in the synthesis of protein that decreases the normal pumping strength by half.

Several cancer-based studies have reported that ABCG2 encodes a protein that leads to multidrug resistance when cancer patients undergo chemotherapy. These proteins pump out important chemotherapeutic agents from the targeted tumor cells, and as a result, the drug fails to eliminate cancerous cells.

To increase the efficacy of chemotherapeutic agents, pharma companies focussed on developing ABCG2 inhibitors. Nevertheless, the administration of ABCG2 inhibitors is expected to make the patients susceptible to gout. Hence, scientists are currently developing drugs that selectively activate the urate pump and counter multidrug resistance.

Treatment and prevention of gout