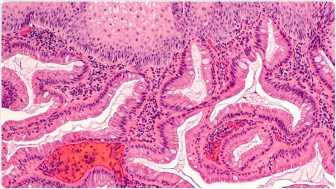 Barrett's Esophagus, which is a condition in which tissues that resembles the tissues of the intestinal lining, substitutes the tissues that line the esophagus. This is not a malignant disease unless the abnormal chances in the tissue progresses to dysplasia and then esophageal cancer.

Preventing the progression of this condition to high-grade dysplasia and cancer is very vital in order to reduce the possible complications as well as improve the survival chance of the patients.

Treatments to minimize the risk of cell transformation into malignancy are available to patients affected by BE and this can greatly help them from becoming dysplastic. 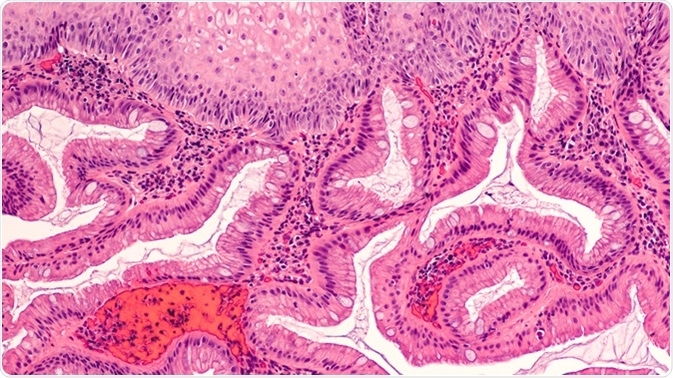 Intestinal (Barrett's) metaplasia of the esophagus is a response to injury from acid reflux (heartburn). It is associated with dysplasia and adenocarcinoma. Endoscopic biopsy photomicrograph. Image Credit: By David Litman

There are myths that state that there is no treatment available to cure Barrett's esophagus. Although clinically the basic treatment for BE without dysplasia is done by controlling the exposure of the esophageal acid with the help of proton pump inhibitor (PPI) medicines such as omeprazole (Prilosec), usually this controlling process is done once or twice a day, depending upon the need.

Studies also report that the cancer risk for people with BE is lesser in patients who consume aspirin or other anti-inflammatory drugs (for e.g., ibuprofen). However, regular intake of these drugs may result in bleeding in the stomach and damage to the kidney. Another drug called statins also helps in minimizing the risk of cancer; these are used to control high cholesterol level.

The first line treatment for this condition is surgical procedure to permanently stop the acid reflux action, which is called anti-reflux surgery. But the sad truth is that, restraining this acid reflux may not prevent Barrett's tissue from transforming into cancer.

In one study it was showcased that, as long as the acid reflux is repressed, there will be a regrowth of squamous tissue in the area of destructed Barrett's tissue.

Even years after the success of ablation therapy, there are chances for the development of cancer in the esophagus. It is advisable to make close follow-ups by participating in biopsy or endoscopy at one- to two-year intervals. Having regular follow-ups even there is no Barrett's esophagus leftover after treatment would be a wise call.

It has been reported that centers performing treatments for greater volumes of Barrett's esophagus and dysplasia patients have attained vast success by making patients avoid progression or surgery of their cancers.

Experienced centers coordinate care tightly with physicians, gastroenterologists, and care crew members to make sure of follow-ups to control symptoms and to monitor side effects.

It is advisable for these patients to be in contact with expert surgeons who can help them with the knowledge of options for both anti-reflux and definitive surgery in the case when medications do not produce effective results.