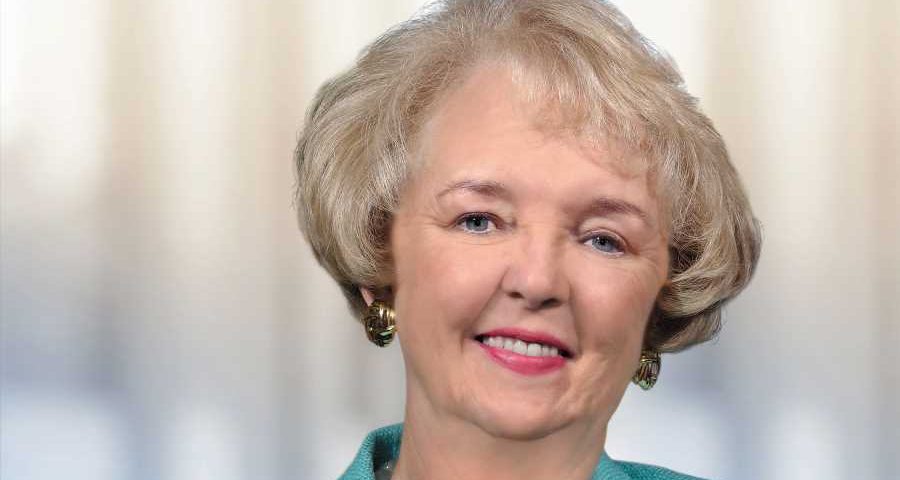 Longtime St. Louis benefactor Joanne Knight has committed up to $11.5 million to Washington University School of Medicine in St. Louis to support an innovative clinical trial aimed at preventing Alzheimer’s disease by treating people before the first signs of the illness appear in the brain.

The gift – as well as any funds raised by Washington University through a $6.5 million matching challenge – will help support the new trial, designed to determine whether early treatment can forestall the cascade of molecular brain changes that eventually lead to memory loss and cognitive decline. Such changes typically begin two decades before the onset of dementia.

The new trial differs from other Alzheimer’s prevention trials – at Washington University and elsewhere – in that it begins treatment even before brain changes become evident via scans and tests. The study involves people genetically predisposed to develop the disease at a young age because it’s easier to evaluate the effectiveness of drugs in people whose path toward disease is so clearly marked.

“Joanne Knight and her late husband, Chuck, have provided indispensable support for Alzheimer’s research at Washington University through many generous gifts over the years,” said Chancellor Andrew D. Martin. “Her most recent gift will aid in understanding this devastating illness and bring us closer to finding a much-needed preventive treatment.”

Joanne Knight has had intimate experiences with Alzheimer’s through the years. Chuck Knight died from complications of Alzheimer’s in 2017, and Chuck’s father and Joanne’s mother both died of the illness.

“I have coped with the realities of Alzheimer’s disease in my family for the majority of my adult life,” Joanne Knight said. “Chuck always believed that if you didn’t like something, you do something about it – and he didn’t like Alzheimer’s. That’s why we first started funding Alzheimer’s research at Washington University. Chuck would be so thrilled by the trials going on now. I am glad to have the opportunity to support clinical trials to preemptively halt Alzheimer’s disease in people.”

The trial will recruit participants with a rare genetic mutation that all but guarantees they will develop the disease as early as their 50s, 40s or even 30s. A parent with such a mutation has a 50% chance of passing the genetic mutation to a child, and any child who inherits the mutation is nearly certain to develop symptoms of dementia near the same age as his or her parent. This timeline gives researchers an opportunity to evaluate the effectiveness of drugs designed to prevent Alzheimer’s. Many of these individuals and families participate in the Dominantly Inherited Alzheimer Network, an international research network led by Washington University to study this strongly inherited form of the disease.

“Our Alzheimer’s team has been at the forefront in understanding how this disease progresses and in developing better diagnostic tests and novel treatment approaches,” said David H. Perlmutter, MD, executive vice chancellor for medical affairs, the George and Carol Bauer Endowed Dean of the School of Medicine, and the Spencer T. and Ann W. Olin Distinguished Professor.

“This new funding will permit them to continue the unique and bold clinical trial design addressing the central question of early intervention. The generosity of Joanne Knight and the Knight family has been critical to this groundbreaking research effort.”

The new trial involves young adults who have inherited a mutation for early-onset Alzheimer’s but whose brains still appear normal and have not yet started to collect plaques of the toxic protein amyloid beta. It is believed that amyloid plaques set off a cascade of brain changes that lead to the death of brain tissue, resulting in memory loss and confusion. Family members without the mutation will be studied for comparison.

During the four-year study, participants will receive a drug designed to block the buildup of amyloid in the brain, or a placebo. The trial will be conducted in people with rare, early-onset forms of the disease, but the results also could benefit the 5 million Americans living with the more common form, which starts later in life. The processes that lead to memory loss and cognitive impairment are thought to be highly similar, whether the disease is caused by a dominant mutation or by the complex combination of genetics and environment that causes most Alzheimer’s cases.

Washington University’s first Alzheimer’s prevention trial, the DIAN-TU-001 (ClinicalTrials.gov identifier NCT01760005), launched in 2012. That study evaluates whether drug treatment can protect people who have some amyloid plaques, but who are still cognitively sharp, from developing dementia. The new study involves even younger people who carry the risky genes but whose brains have not yet begun changing.

“Beginning with their support for the Charles F. and Joanne Knight Alzheimer’s Disease Research Center at Washington University and continuing today, the Knight family’s contributions have been key to seeding the success of Alzheimer’s research at the university, enabling us to lead the DIAN-TU trials worldwide,” said Randall J. Bateman, MD, the Charles F. and Joanne Knight Distinguished Professor of Neurology and director of the Knight Family DIAN-TU. “With the Knight family’s latest commitment, the Knight Family DIAN-TU is enabled to launch bold and potentially world-changing trials in the fight against Alzheimer’s disease.”

In addition to the Knight family, the new prevention trial is supported by two grants totaling an estimated $97.5 million from the National Institute on Aging of the National Institutes of Health (NIH), awarded to the trial’s principal investigator, Eric McDade, DO, an associate professor of neurology at the School of Medicine and associate director of the Knight Family DIAN-TU, as well as $14 million from the Alzheimer’s Association and GHR Foundation.