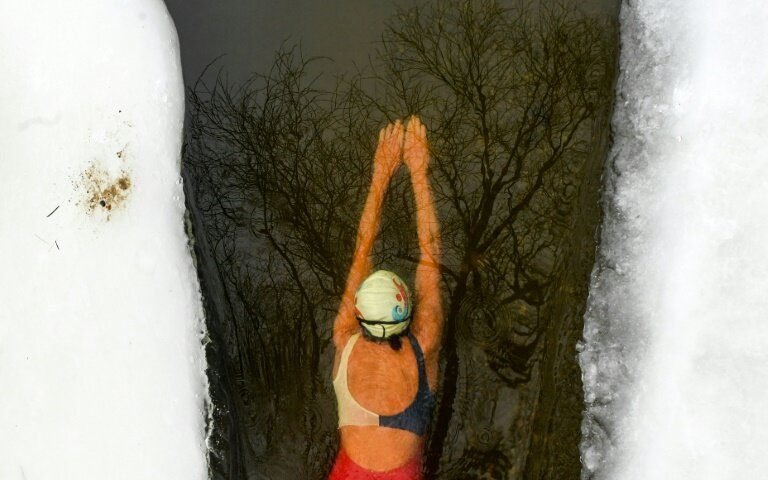 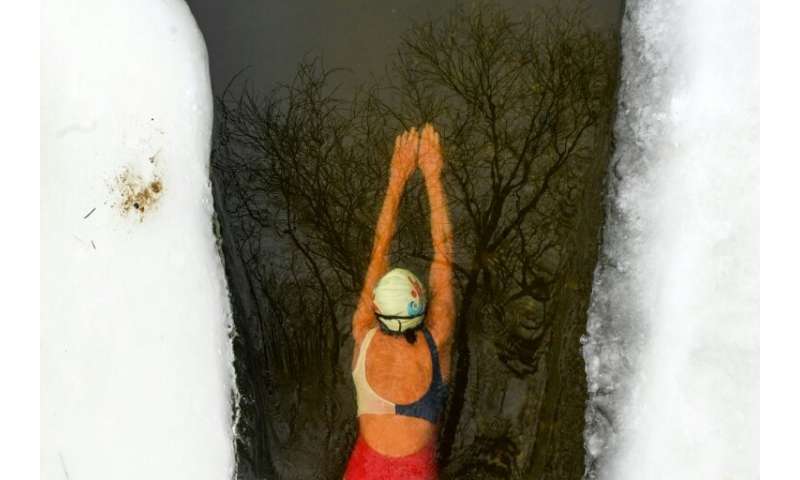 Diving into a long hole cut in the ice, Viktoria Tsuranova swims a few strokes and flashes a smile at the photographer capturing the moment for her Instagram account.

She is one of a new generation of Russian “Walruses”—hardy swimmers who plunge into frozen rivers and lakes all through the winter.

They swear it wards off not just colds but also cellulite, as well as giving them a rush of euphoria.

Ice swimming in Russia has long been associated with older, usually Speedo-clad men.

But Tsuranova and other members of Moscow’s “Walruses of the Capital” club are giving it a fashionable new image.

“A sporty way of life is right on trend now,” says Nikolai, drinking rosehip tea with honey in a grey onesie.

He has just taken a dip in the L-shaped strip of water cut by the bank of the Moskva River, in the relatively balmy air temperature of minus two degrees C (28 degrees F).

“There’s a kind of new wave of young people coming up now, following the generation that set the standard for walrus swimming—the older generation.”

Tsuranova, a fitness blogger, later posts a video and photo of her swim on her Instagram, which has 103,000 followers.

Shivering a little in a fur coat after her swim, she says: “I’m just interested in the extreme, in testing myself. I’m scared every time.” 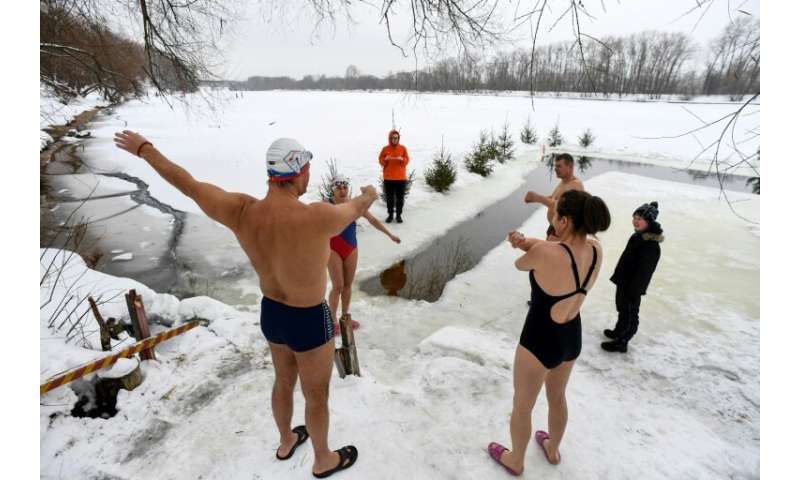 She says she hasn’t been ill once over the winter.

Others are more equivocal on the health effects of ice swimming, defined as taking a dip in water temperatures of zero to four degrees C.

Russia’s winter swimming federation, based in the Siberian city of Tyumen, lists joint health and good skin among the benefits.

But it also warns that those with weak hearts or breathing problems should not attempt it.

A separate study by Tyumen scientists in 2015 found that the cold temperature caused stress on the body for people who swam in ice over a period longer than 10 years.

Ice swimming is also practised in Scandinavia and China, though it is particularly popular in Russia, where cold water is seen as a way to toughen people up. 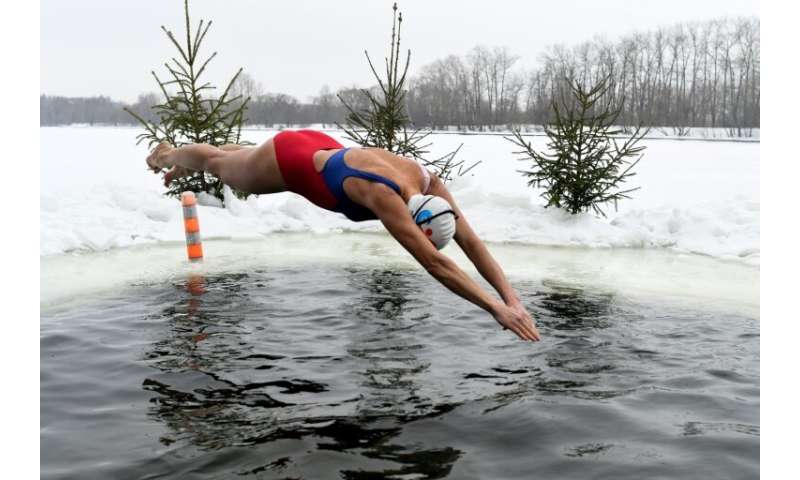 Millions of Orthodox believers in the country plunge into icy pools every Epiphany as part of a religious tradition.

The facilities at the “Walruses of the Capital” club are minimal—a green-painted hut with tiny changing rooms heated by stoves.

Depending on their experience, ice swimmers tend to stay in the water for anything from one to around five minutes.

But the club is not just an amateur organisation—it also trains swimmers to take part in international competitions held outdoors in winter.

The club’s star swimmer Osman Delibash, 26, trains regularly and recently made a video showing her sitting for an hour in the frozen-over pond in her garden.

This set a record recognised by a Russian association for the longest stint in cold water by a woman.

She has also won a string of medals for swimming distances of up to a kilometre in sub-zero air temperatures. 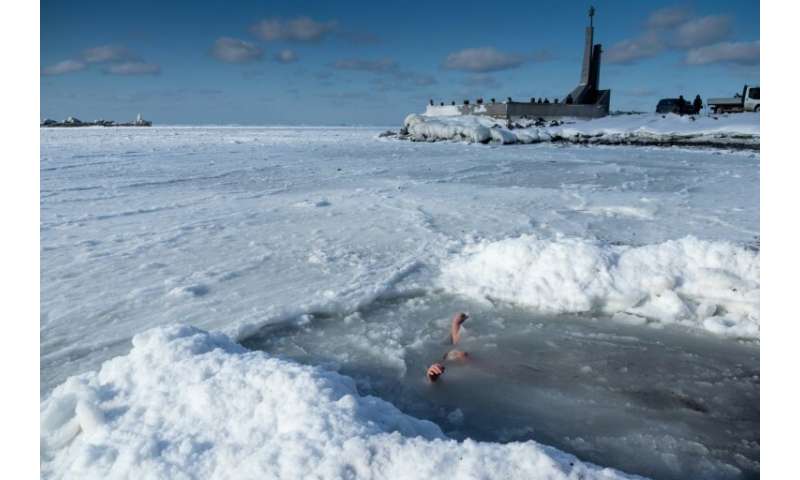 Delibash, who also teaches soldiers serving in extra-cold environments and performs as a stunt woman, walks around in the snow bare-legged in a bathrobe.

“Water is my element—specifically icy water,” she says.

The club’s founder and Delibash’s trainer, Natalya Seraya, gives out certificates to a group of new “walruses” as they crowd inside the steaming hut.

Seraya, who has set Russian records for marathon ice swims, tells them: “Nothing will boost your immunity more strongly than icy water.”

“This is the path to health and long years of active life.”

However, as part of her postgraduate studies, she is also researching, with the help of some of the club’s ice swimmers, where the limits in its benefits lie.

“What’s good for you, what’s dangerous, where is the dividing line?” Seraya says, describing the outlines of her research into the effects of ice swimming. 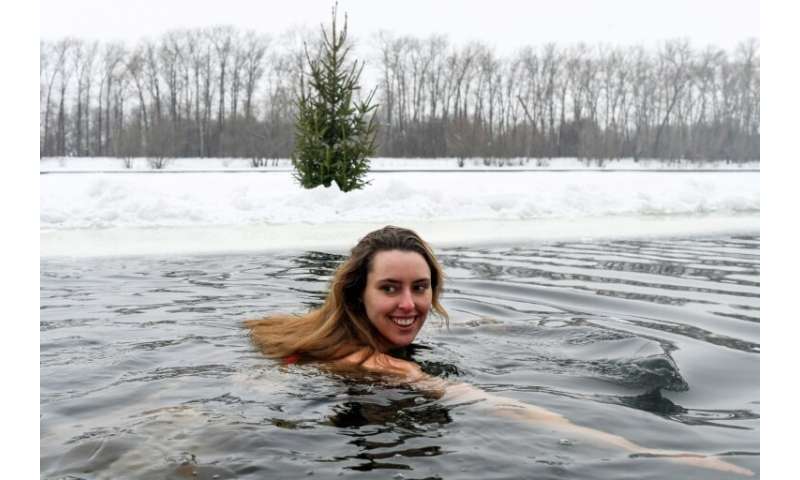 “There’s some kind of cleansing, as if you reset yourself back to zero,” said first-time swimmer Tatiana Batalova, while blogger Tsuranova says she feels a “high” on emerging.