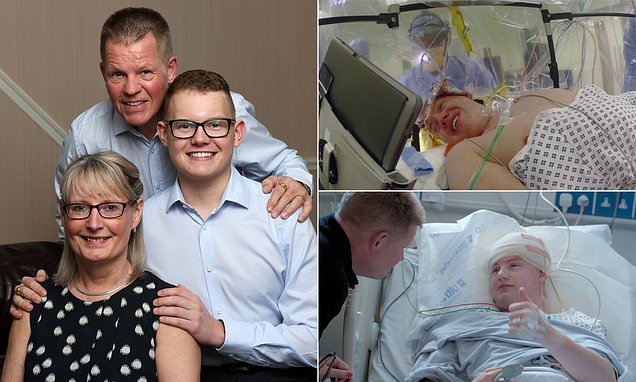 ‘Is my brain out?’: Trainee Army medic, 20, jokes with doctors as he has brain surgery WIDE AWAKE after doctors found ping-pong-ball-sized tumour

A team of neurosurgeons is on the hunt for a ping-pong-ball-sized tumour, lodged in the left side of Cameron Ray’s brain. Not that you’d know it.

Chuckling, the 20-year-old patient gives a thumbs-up to the surgical assistant and cheekily asks the assembled doctors and nurses: ‘Is my brain out?’ It sounds astonishing but Cameron is one of a few people in the UK to have brain surgery while conscious – otherwise known as awake craniotomy.

Unlike regular brain surgery, in which patients are put to sleep for the duration, awake craniotomy patients receive a local anaesthetic that leaves them alert and engaged throughout. 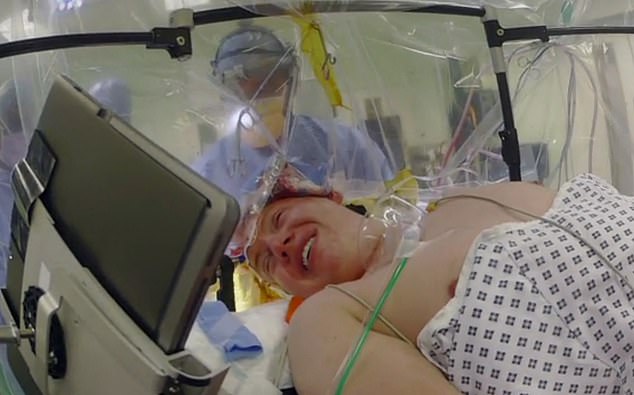 Cameron Ray, 20, chuckles as he has brain surgery at Queen Elizabeth hospital in Birmingham 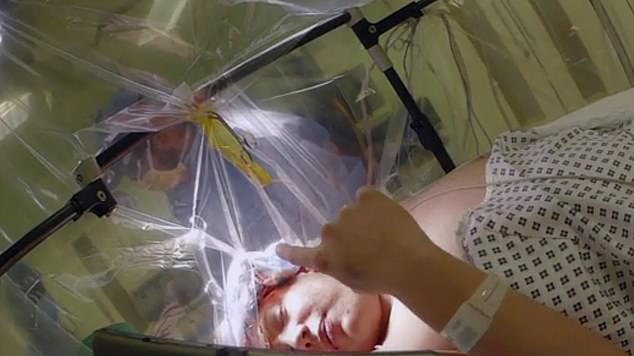 Cameron asks ‘is my brain out?’ as the operation continues to remove an aggressive tumour sat deep within his left frontal lobe

Surgeons then perform language and movement tests on the patient mid-operation, working out how tampering with specific brain areas affects their abilities.

This offers them crucial knowledge about which sections of brain they can cut through, and which they must avoid.

In Cameron’s case, an aggressive tumour sat deep within his left frontal lobe – the hub for language, speech and memory, among other vital processes.

As neurosurgeon Dr Ismail Ughratdar says: ‘A wrong move just a millimetre to the right or left can result in catastrophic, permanent brain damage.’

Now, for the first time, this astonishing procedure will be broadcast to millions as part of a BBC series, Surgeons: At The Edge Of Life, which starts on Tuesday.

One heart-stopping moment sees otherwise chirpy Cameron break down in tears as, mid-operation, he finds himself unable to find the word ‘football’ when shown a picture of one. ‘I knew the word but it just wouldn’t come out,’ he remembers, speaking to The Mail on Sunday last week. ‘I felt helpless.’ 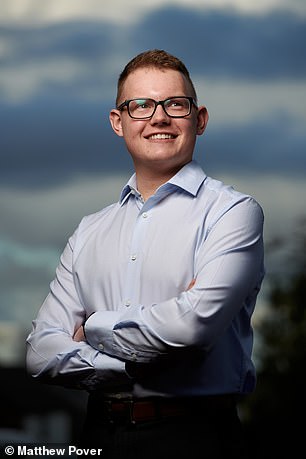 Cameron’s (pictured) journey to the operating table began in December 2017, when he came down with a fever he couldn’t shift

We first meet Cameron as he prepares for the pioneering operation to remove the growth within his brain.

His journey to the operating table began in December 2017, when he came down with a fever he couldn’t shift. Feeling nauseous and light-headed, he barely ate for a week – and one morning he collapsed. ‘I was rushed to hospital,’ recalls the trainee Army medic. ‘They thought it was meningitis at first.’

‘They found a tumour – and weren’t sure if they could operate,’ he says. ‘Because of the position of the growth, cutting it out could leave me brain-damaged. I was sent to a specialist centre where the surgeons would decide.

‘Amazingly, they also said the fever was probably unrelated to the cancer, so spotting it was totally by chance.’

In February 2018, Cameron was referred to the neurosurgery unit at Queen Elizabeth hospital in Birmingham. There he met Dr Ughratdar, who told him he was a suitable candidate for brain surgery while he was awake.

Research by neurosurgeons at the University of Florida suggests that awake craniotomy can be highly effective. A quarter of ‘awake’ patients in one study had their entire tumour removed, with no cancer remaining, compared to just six per cent of patients having traditional brain surgery. 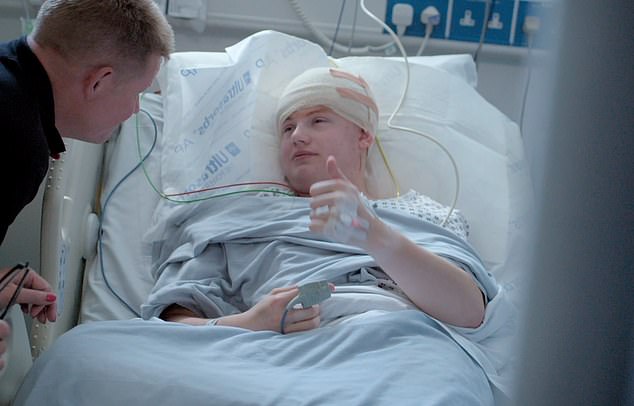 Cameron gives a thumbs up after completing his surgery. According to Dr Ughratdar, most patients can go home the following day – but Cameron had problems with his recovery meaning he couldn’t speak properly for three weeks

Dr Ughratdar explains: ‘Surgeons are more cautious about removing larger chunks when a patient is asleep. They worry about how it will affect functioning.

‘But we test behaviour there and then, during surgery, so we can be more confident we’re removing the tumour safely.’

However, while the threat of brain damage is lower, there are other risks. The operation in fact involves putting a patient under a general anaesthetic, in order to perform the most painful part – the opening of the skull – and then waking them. This process in itself increases the chances of a potentially fatal seizure. 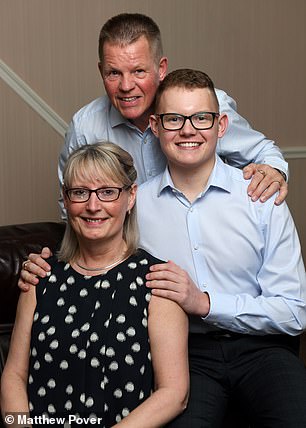 The decision to have the surgery while awake lay with the young patient and his parents, Richard, 56, a crew manager for Lancashire Fire and Rescue Service and Jackie, 55, who recently retired from her job at Tesco (pictured together)

Ultimately, the decision lay with the young patient and his parents, Richard, 56, a crew manager for Lancashire Fire and Rescue Service and Jackie, 55, who recently retired from her job at Tesco. Cameron, from Darwen, Lancashire, says: ‘I immediately agreed. I wasn’t frightened, not at all. In fact, I felt lucky to be offered such an interesting type of surgery.’

Only a handful of centres in the UK offer the procedure, including the Queen Elizabeth in Birmingham and King’s College hospital in London.

In the weeks leading up to surgery, a series of detailed scans was taken to determine the areas of Cameron’s brain likely to be affected. In July 2018, he was admitted to hospital for the five-hour operation.

In the operating theatre Cameron’s head is secured to the operating table using a brace and bolts to prevent movement. He is then given a small dose of general anaesthetic to send him to sleep.

Then, an hour into the operation an anaesthetist reduces the sedative medication, causing Cameron to gently wake up.

Viewers of the documentary see him introduced to speech and language therapist Becky Marr. Her face is the first Cameron sees when woken.

As well as providing emotional support, she tests Cameron’s ability to read and speak while the surgeon stimulates areas of the brain. 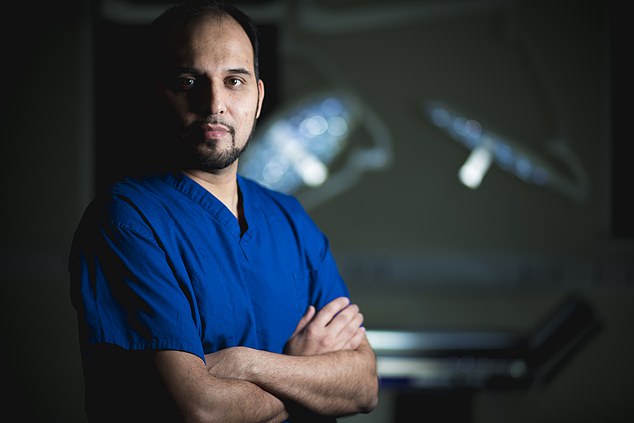 Dr Ughratdar told Cameron he was a suitable candidate for brain surgery while he was awake. Research by neurosurgeons at the University of Florida suggests that awake craniotomy can be highly effective

When he struggles to speak, Dr Ughratdar marks that area of brain tissue as a ‘no go’ area using tiny pieces of cotton.

Cameron says: ‘I can’t remember the first 20 minutes of my eyes being open, but then I started chatting to the doctors and Becky, laughing and making jokes.

‘It wasn’t painful. It just felt like I had an itch on my head that I couldn’t scratch.’

Once Cameron is more alert and coherent, Becky asks him to identify a series of familiar images displayed on a computer. Meanwhile, Dr Ughratdar uses electrodes to stimulate the borders of the tumour and surrounding brain tissue.

Three other amazing ops transforming the face of medicine

A host of similarly cutting-edge operations is set to stun viewers in the eagerly anticipated second series of Surgeons: At The Edge Of Life.

In the first episode, we see a 10in polyester stent – or tube – being implanted into the stomach of 71-year-old grandmother Maggie Jennings.

The synthetic tube replaces a large section of Maggie’s aorta, the major artery that transports blood from the heart to the rest of the body.

It is a dramatic fight against the clock for cardiac surgeon Jorge Mascaro: an aneurysm – often likened to a blowout in a car tyre – has left the vital vessel weakened, and it could rupture at any moment. The stent is a livesaver, but one in ten patients don’t make it out of surgery alive.

The drama continues in episode two when we meet former police officer Loretta Milligan, who has a rare genetic condition that affects just 50 people worldwide.

Tumefactive fibroinflammatory disease has caused a collection of tennis-ball-sized growths to amass in the left side of her face. The immense lumps obstruct her nasal passage and her mouth, fusing it shut and putting her at increased risk of sudden, fatal stroke. All treatments have so far failed, leaving full facial reconstruction as the 50-year-old’s last chance.

In a UK first, consultant maxillofacial surgeon Tim Martin and his team at Birmingham’s Queen Elizabeth Hospital use the latest 3D printing technology to design Loretta’s new face, before crafting it out of bone taken from her hip. The all-day procedure takes a blood-curdling turn for the worse when surgeons discover a lethal ruptured blood vessel.

The cancer is entwined within the nerves that connect the body and the brain, making it almost impossible for Dr Paluzzi to safely remove it.

The pressure mounts in theatre as one technique fails to reach the growth, and Norah’s ability to speak or breathe is at risk.

Meanwhile, families wait with bated breath, wondering: ‘Will the operation cause more harm than good?’

The team then assesses Cameron for any changes in speech and problems with words are put into three categories: semantic, phonemic or arrest.

A semantic error refers to mistaking one word for another with a similar meaning.

These errors act as a warning to surgeons that the stimulated region is at risk of damage.

If the word can’t be found at all, it is classified as an arrest: a sign that severe damage is likely.

This happens to Cameron at the moment he is shown the picture of a football.

He recalls: ‘When Becky said “arrest” at this point, I knew it meant that the surgeon wouldn’t be able to reach that part of the tumour without my speech being affected.

‘But to be honest, I wasn’t that worried about my speech, I just wanted to make sure they got all of the tumour out.’

After ten minutes of tests, Dr Ughratdar detaches the tumour from the blood vessels it was growing around and removes it, carefully avoiding the ‘no go’ areas.

‘We continued to test Cameron’s speech during throughout the process,’ explains Dr Ughratdar. ‘We had to be especially careful as the tumour was next to a main artery. Severing this would have left him unable to speak and paralysed down the right side of his body.’

Cameron remains awake, although under light sedation, for the remaining two hours of the operation. The patch of his skull is reinstated and secured with several stitches before he is taken to a recovery unit, where he stays for a week.

According to Dr Ughratdar, most patients can go home the following day. He explains: ‘The brain swells in about a third of patients, causing them to lose speech completely for two to three weeks.

‘This was the case with Cameron. But most are unaffected and return home the next day.’

Three weeks later, Cameron had regained full use of his speech. However, his hopes are dashed when the results of his tumour biopsy crush any prospect of a full recovery, and in the programme we see Dr Ughratdar give him the bad news.

‘Cameron’s tumour is an aggressive, high-grade cancer which means it is likely to grow or spread,’ he says.

While 95 per cent of Cameron’s tumour was removed and his brain was left unharmed, Cameron’s cancer is deemed incurable.

He has had chemotherapy and radiotherapy to give him the best chance, but his prognosis stands at between five and seven years.

Nine months on from his surgery and with one final month of chemo to go, you’d never know Cameron, now 21, was sick.

And with the same zest for life he showed on the operating table, he says: ‘In the next couple of month I’ll restart my medical training. Yes, this tumour will kill me, but I’m not just going to sit at home just waiting for something to happen.’

Surgeons: At The Edge Of Life is on Tuesday at 9pm on BBC2.