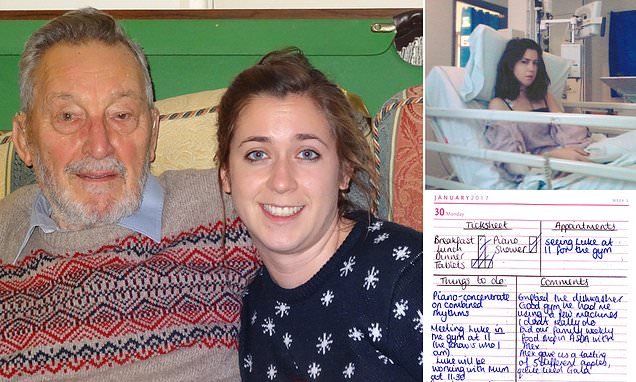 A computer analyst’s short-term memory was completely wiped by a rare brain infection.

Things took a turn for the worse when Ms Bennett became so disorientated she was convinced she was in the US.

After being rushed to Queen Elizabeth Hospital in Woolwich, south east London, Ms Bennett was diagnosed with the rare brain condition encephalitis, which doctors suspect was caused by a virus.

Following a two-week stay, Ms Bennett was discharged, only to be admitted three days later to Dartford’s Darent Valley Hospital in Kent when her symptoms reappeared.

After a two-month stint in hospital, Ms Bennett is home but unable to remember anything beyond the past few minutes.

And with doctors warning her short-term memory will never return, she even has to remind herself to shower and eat. 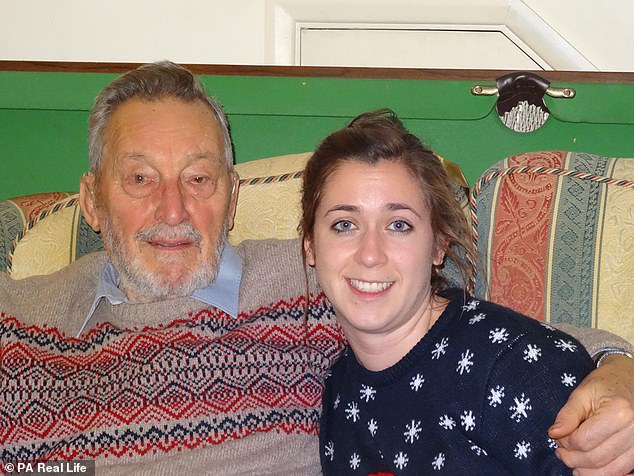 Clair Bennett’s short-term memory was wiped in January 2015 after she developed the brain-inflammation condition encephalitis as a result of a viral infection. She is pictured with her grandfather Eric during Christmas 2014 in the last picture taken before she became unwell 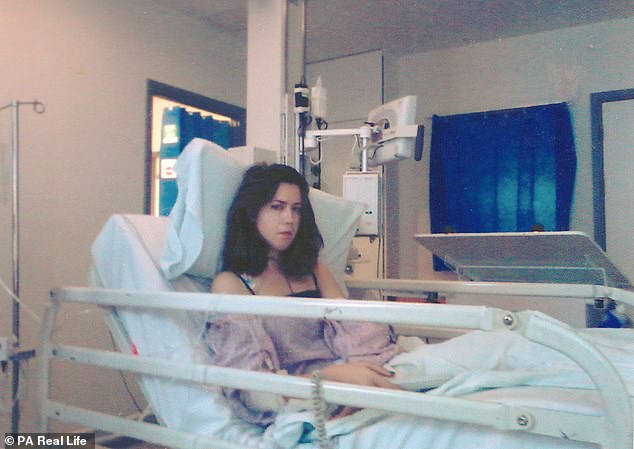 Ms Bennett was rushed to hospital when she developed ‘violent headaches’ and became feverish. Things took a turn for the worse when she became so disorientated she was convinced she was in the US. Her first hospital stint lasted two weeks but it was not her last 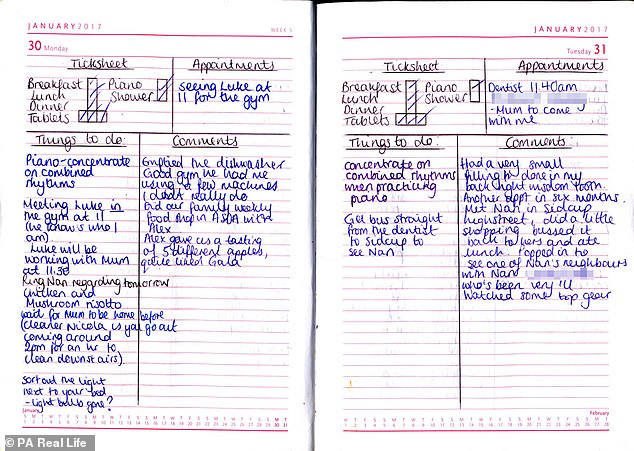 With doctors warning her short-term memory will unlikely ever improve, Ms Bennett is forced to jot every tiny part of her day down, including showering, ringing her nan and even eating

Ms Bennett – who cannot remember the six months before she became unwell – had been looking forward to a solo holiday to Australia.

But amid the excitement of her upcoming travels, she began to feel unwell.

Told by her doctor it was likely just flu and she should rest, things took a dramatic turn for the worse on January 12.

Ms Bennett’s father Mark, 60 – who is now her full-time carer – said: ‘Clair’s work had phoned her flatmate to say she hadn’t come in, asking if she was okay.

‘When she went to check on her, Clair was really disorientated, asking if she was in America.

‘She phoned me to let me know what was going on, but I wasn’t sure why any of this was happening, or what to think of it, which I feel guilty about now.’

By the time Mark and his wife Penny arrived, doctors had already diagnosed their daughter.

‘They told my wife Penny and I to go home and get some rest, as she’d be in intensive care overnight,’ he said.

‘The next morning, we came back and she was awake, but very disorientated.

‘She kept asking if we had missed Christmas and then, when I asked if she knew who we were, she said no.

‘As a dad, that still makes me emotional – for your own daughter not to recognise you.’ 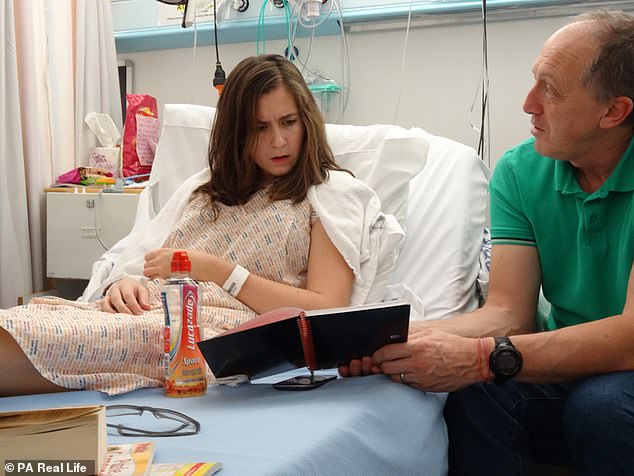 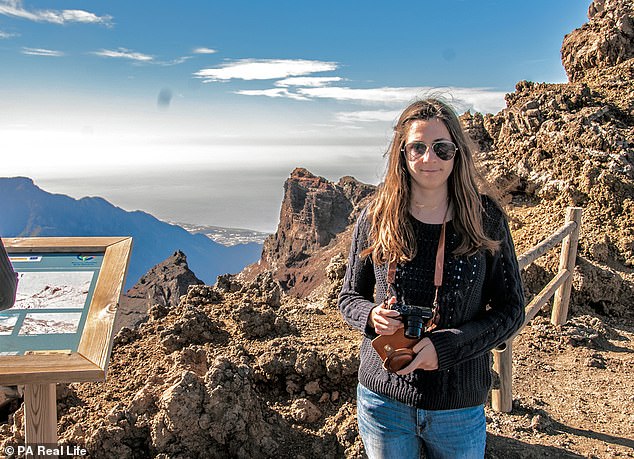 Pictured on holiday in the December after she became unwell, Ms Bennett refuses to let her poor memory hold her back and insists she ‘still gets a lot out of life’

After a two-week stint in hospital, Ms Bennett was discharged but her memory has never been the same.

While she is able to recall things that happened before she became unwell, her short-term memory was initially virtually non-existent.

Encephalitis is an uncommon but serious condition in which the brain becomes inflamed (swollen).

It can be life-threatening and requires urgent treatment in hospital.

Anyone can be affected, but the very young and very old are most at risk.

Encephalitis sometimes starts off with flu-like symptoms, such as a high temperature and headache, but these don’t always occur.

More serious symptoms develop over hours, days or weeks, including: confusion or disorientation, seizures (fits), changes in personality and behaviour or loss of consciousness.

Dial 999 for an ambulance immediately if you or someone else has these more serious symptoms.

It’s not always clear what causes encephalitis, but it can be caused by viral infections. Several common viruses can spread to the brain and cause encephalitis in rare cases, including the herpes simplex virus (which causes cold sores and genital herpes) and the chickenpox virus.

‘Thankfully, she’d got back who we were and could remember things like where she grew up and who her old friends were,’ Mark said.

‘But she couldn’t hold on to short-term memories.

‘Friends would come round and visit and she’d soon forget she’d even seen them.’

Hoping they could put the ordeal behind them and move forward, Ms Bennett’s family were dealt another blow when she was struck by encephalitis again just three days after leaving hospital.

‘She came downstairs one morning and seemed really wobbly, as if she could fall over at any second,’ Mark said.

‘The only thing I could think to do was what I’d seen on TV, where police test drunk drivers, getting them to count back from 20.

Mark phoned 111 – the NHS non-emergency number – who sent out a paramedic.

Ms Bennett was rushed to hospital, where her diagnosis was confirmed.

This time the computer analyst stayed in hospital for two months and one week, by which time her short-term memory was even worse.

Mark recalls an instance in August 2015 when, on the way to the ferry port for a family holiday, Ms Bennett asked 48 times in a 90-minute journey if he had her passport. 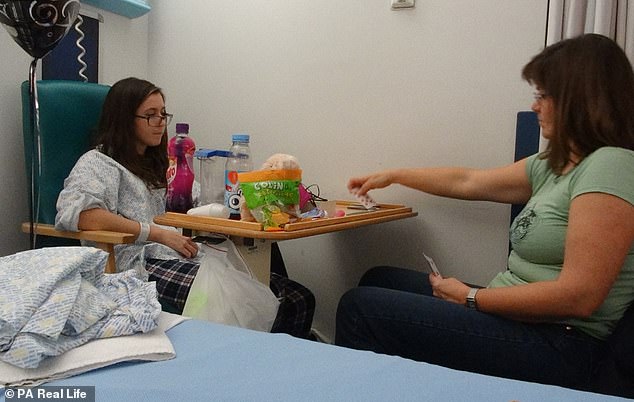 Ms Bennett is pictured playing cards with her mother Penny in Dartford’s Darent Valley Hospital in Kent. She was rushed there just three days after being discharged from the Queen Elizabeth when her symptoms returned. Following a re-diagnosis, she stayed for two months 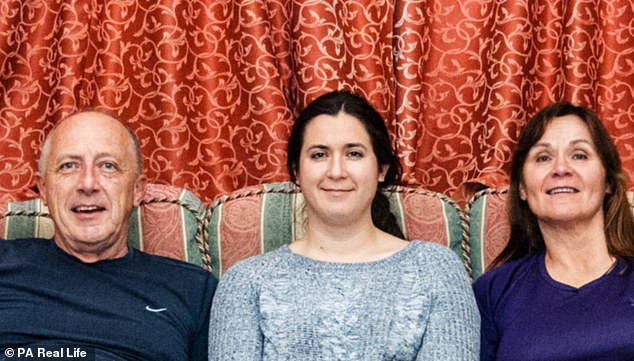 Pictured with her parents, Ms Bennett ‘looks for the positives’ and tries to stay busy

Following several ECG scans, doctors have confirmed Ms Bennett is unlikely to ever see any significant improvement to her memory.

On the advice of an occupational therapist, she keeps a daily diary, where she records everything she has done that day, as well as reminders to do basic things like wash and eat.

‘She needs to be able to physically tick things off to remind her she’s done them, or she’ll have no idea,’ Mark said.

‘For example, she still loves cooking, but she has to follow recipes with a tick list, otherwise she’ll forget she has already finished a step and start peeling a load of potatoes or prepping veg again.

‘She can very easily get disorientated in new places, too.’

A tight schedule is also important for Ms Bennett, who goes to the gym on Mondays, see her grandparents on Tuesdays and exercises again on Wednesdays, followed by art or piano lessons.

Ms Bennett often even surprises herself by how good a pianist she is, with her forgetting each time.

‘She’d been learning before the illness but doesn’t remember,’ Mark said. ‘Her teacher was actually Tokio Myers, who went on to win Britain’s Got Talent.’

On Thursdays, Ms Bennett volunteers in a charity shop, before spending Fridays with the brain-injury charity Headway.

Ms Bennett and her father are speaking out to raise awareness of the condition ahead of World Encephalitis Day 2019 on February 22.

And despite all she has faced, Ms Bennett is determined to stay upbeat.

‘I am thankful I don’t remember any of being ill,’ she said.

‘Even if my short-term memory does come back, I will still keep my diary.

‘I wouldn’t be without it. I can look back on any given day of my life for the past four years, and know exactly what I did – even if I can’t remember it.

‘I always look for the positives and even though I can’t make new memories, I know I’m still getting a lot out of life now.’

Mark added: ‘Clair is so positive and always smiling, but she couldn’t dwell on the negatives even if she wanted to, as she forgets them.

‘As a family, we do all consider ourselves lucky when you see how encephalitis impacts some people, but her short-term memory has been hugely affected.’ 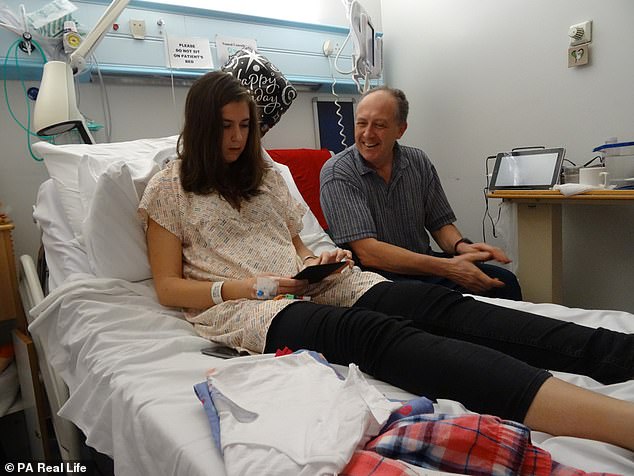 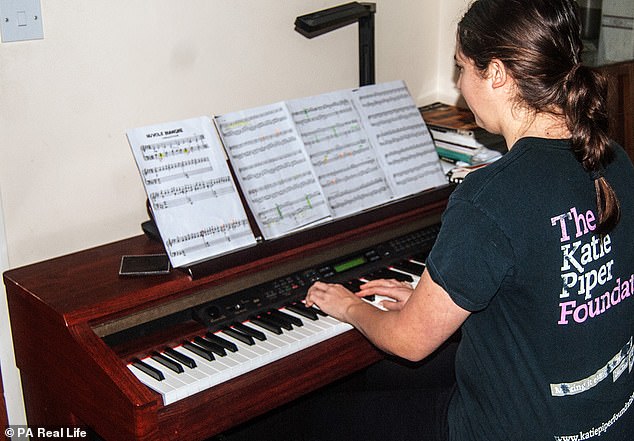 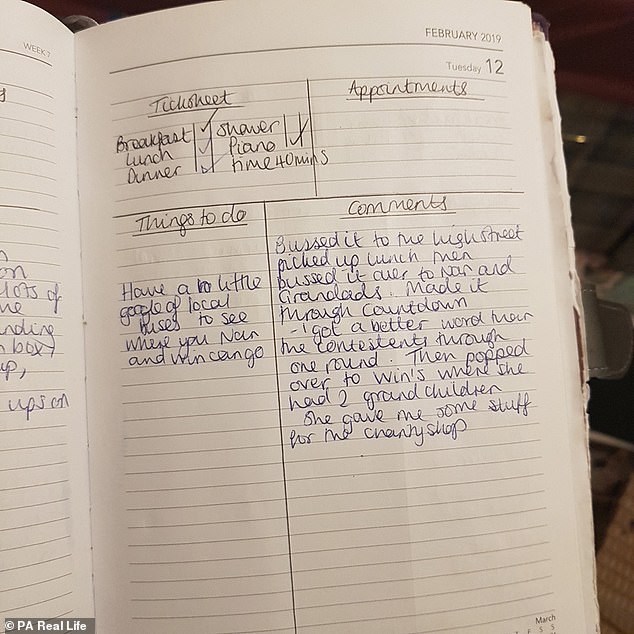