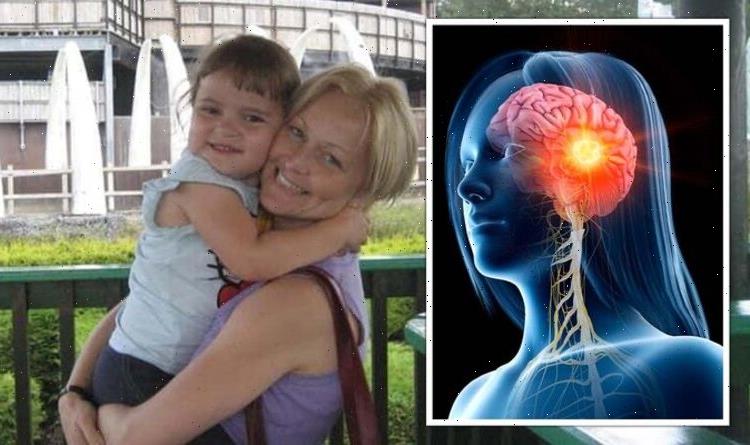 Nicola Clark, 44, a mother from Essex, was misdiagnosed with epilepsy in 2010 after the onset of seizures. For seven years, she took medication for the condition to no avail while her seizures worsened. At one point Clark’s husband even “saved” her life as she passed out in the middle of an Essex road.

Over the years, she visited her GP several times who sent her off for scans which failed to find the slow-growing cancerous tumour burrowed inside her brain.

In that time, her absence seizures, which caused her to black out during conversations, became more intense and regular. In the early days of her conditions, Clark would have seizures once every three months but by 2017 she was having an intense seizure every three weeks.

Clark even used to ask herself ‘Where’s the best place to stand?’ at parties so she wasn’t as dangerous or “embarrassing”.

She said: “They tried all these different tests, but the only thing that was changing was it was getting worse. So they did the best they could. But it was my tumour that was playing hide and seek on scans.

“It was really difficult because…we tried everything…it was getting worse and worse, but they couldn’t find it. It was presumed it was epilepsy.”

The symptoms of a brain tumour are headaches, fits and feeling sick persistently but according to the NHS, the symptoms may be slow to develop as they were for Clark.

It was only when Clark went further north to the Royal Hallam hospital in 2017 for a second opinion that her condition became clear.

She had a Grade 1 ganglioglioma which she had to get brain surgery for, which involves putting a large hole in your skull to get access to the brain and remove the tumour.

“I was actually really pleased. Yeah… which sounds bonkers,” said Clark about her diagnosis.

“Once you’ve got an element of knowledge that you know, it is factual. And it’s definite, and you can learn about it, you can find as much information and that’s half the battle.”

Grade 1 tumours are low grade, meaning they grow slowly and are less likely to return after treatment but there is always a possibility.

Today, her brain tumour is in remission but she says it is always worrying knowing it could come back.

“You think you’re fine. But there’s always an element of ‘is it going to come back’.

“It’s a work in progress. It’s a long term thing because you’ve got a permanent brain injury. And if you try and do too much, then you get tired.

“Eventually you get tired throughout the day. So it’s a case of walking around taking breaks and things like that.”

Today, Clark has a positive outlook on her diagnosis and is helping the brain tumour charity to raise awareness for the condition.

She said with a giggle: “When life gives you lemons, you make lemonade.”

More than 11,000 people are diagnosed with a brain tumour in the UK every year, and approximately half of these are cancerous, according to the NHS.

The Brain Tumour charity states that there are at least 88,000 children and adults living with a brain tumour in the UK. It is likely that many of which will be undiagnosed.

There are a few risk factors for the condition, including age as most people with brain tumours are between 85 to 89.