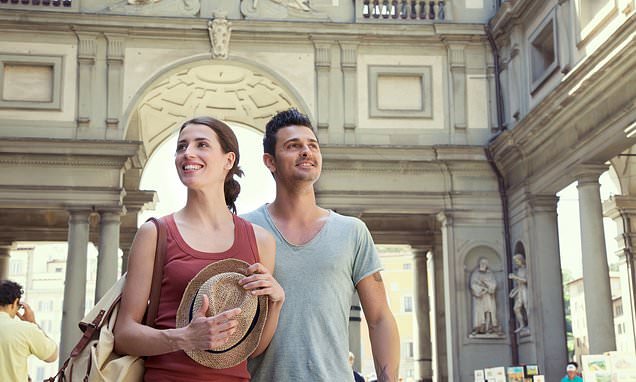 Prescribing museum trips may save the NHS cash – but will it help anyone get better? JONATHAN GORNALL on GPs referring patients to ‘non-clinical services’ such as walking and yoga

Do you really need to see your GP? Perhaps you’d be better off visiting a museum, joining a walking group or taking up yoga.

That’s the thinking behind ‘social prescribing’, the latest big idea in healthcare. The NHS says there is growing recognition that health is ‘determined primarily by a range of social, economic and environmental factors’ — so instead of drugs or counselling, GPs are encouraged to refer a patient ‘to a range of local, non-clinical services’.

In plain language, this means referring them to a community ‘link worker’ who will suggest activities they might like — anything from lunch clubs, walking groups and nature-based activities to arts and museum visits, reading and exercise classes.

As for who’s eligible, this ranges from ‘those who need support to manage long-term conditions’ to ‘those who may be … at high risk of mental health crisis, lonely or isolated’, says Public Health England. 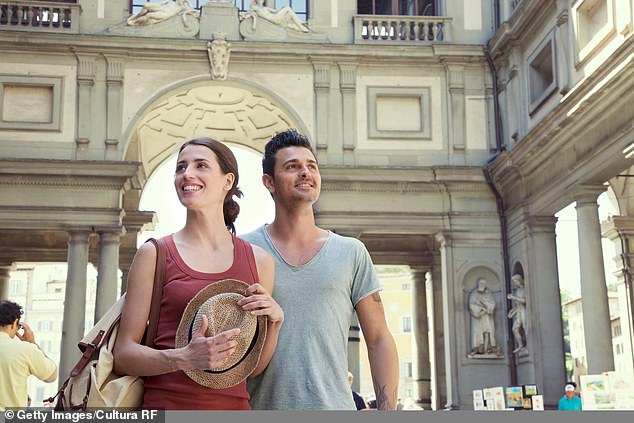 The NHS is encouraging GPs to refer a patient ‘to a range of local, non-clinical services’ instead of drugs or counselling (stock)

And it’s not just the patients who will benefit — social prescribing promises to free up GP time and cut costs. As NHS England puts it, social prescribing ‘can bring benefits to people’s health and wellbeing as well as deliver important . . . savings’.

Perhaps not surprisingly social prescribing is taking the NHS by storm and has already been adopted by more than a quarter of local health authorities in England.

Matt Hancock, the health secretary, has hailed social prescribing as ‘indispensable’ for GPs, ‘just like a thermometer’.

‘For too long we’ve been fostering a culture that’s popping pills and Prozac,’ he told a recent conference. His alternative vision was to ‘harness the power of the arts and social activities to improve the nation’s health’. Indeed, a trip to the museum to help your depression and cut your NHS pill bill sounds like a win-win for patient and health service alike. 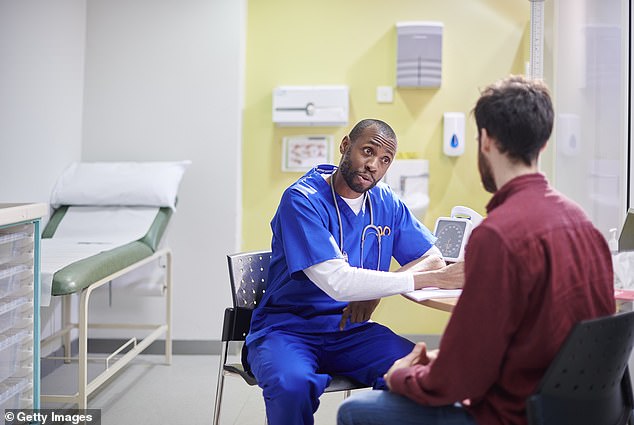 In plain language, it means referring them to a community ‘link worker’ who will suggest activities they might like (stock)

But there is a snag with this vision.

Critics say there is almost no evidence that social prescribing works — and that in the face of rising demand and costs, the government is turning to a cheap, unproven alternative to conventional healthcare.

Whatever the social prescription, all these activities have one thing in common: they are far cheaper than recruiting the extra GPs the health service badly needs. In November Matt Hancock tweeted that social prescribing ‘saves the NHS money. Because many of these social cures are free’.

Last year almost 70,000 patients were referred to 331 link workers — NHS England told Good Health that ‘the evidence is clear’ that ‘link workers are able to give patients helpful advice on underlying issues and help keep people well for longer while also helping to ease GP workload’. That was why ‘social prescribing support is being rolled out across England’.

But the reality is that evidence for the benefits, safety and cost-effectiveness of social prescribing is far from clear.

The NHS referred Good Health to a pilot study in 2014 involving 1,500 patients with long-term health conditions in Rotherham in Yorkshire. This found that ‘a large majority … experienced positive health and wellbeing outcomes’.

But patients were monitored for only 12 months and the authors admitted that, ‘due to the limits of the resources available’, there was no control group of patients receiving traditional treatments. As a result, they conclude that ‘there is a need for more evidence on the effectiveness’. Indeed this is the overwhelming conclusion of a number of other studies.

A review of evidence published in the journal BMJ Open in 2017 concluded that although social prescribing was being ‘widely promoted and adopted . . . evidence fails to provide sufficient detail to judge either success or value for money’. Researchers could find only 15 UK studies on social prescribing, most of which were ‘small scale, limited by poor design and reporting’ and offered ‘little convincing evidence for either effectiveness or value for money’. 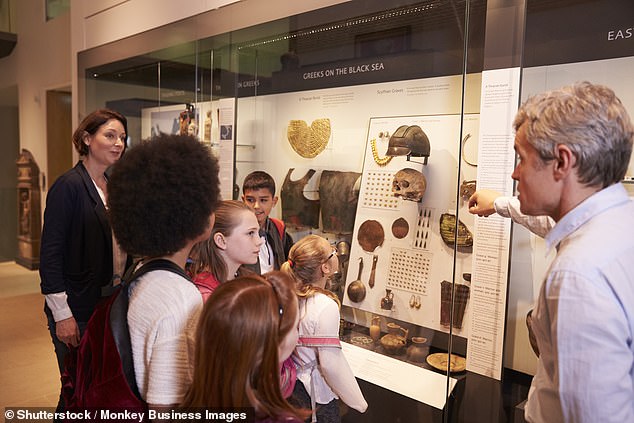 Suggestions can include anything from lunch clubs, walking groups and nature-based activities to arts and museum visits, reading and exercise classes (stock)

And yet, as they reported in their paper, ‘Social prescribing: less rhetoric and more reality’, most studies ‘have presented positive conclusions, generating a momentum for social prescribing that does not appear to be warranted’.

One of the biggest studies to date was carried out in 2015 by the University of Glasgow’s Institute of Health and Wellbeing — it evaluated the impact of a link worker programme on 288 adult patients over nine months in seven GP practices.

When compared with patients in eight traditional practices, they found social prescribing had ‘no statistically significant’ impact on health-related quality of life for patients who had depression, anxiety or social problems, or who needed to exercise more and smoke and drink less.

Bad, good, best: How to get the most out of food choices. This week: Kale 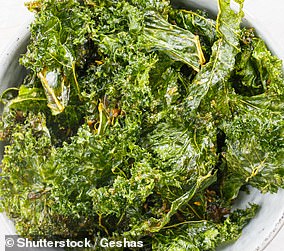 They may seem more virtuous than other savoury snacks, but store-bought kale crisps can have as much fat and calories (50 per 10g) as Kettle Chips.

And they may contain only powdered kale, not the vitamin-rich and high-fibre whole veg.

You could crisp lightly oiled kale leaves in the oven. 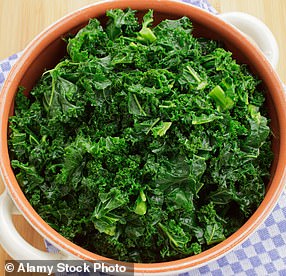 Kale stands up to boiling well, but it has a detrimental effect on some nutrient levels, which leach out.

Although 100g of raw kale has 34mg magnesium (which is good for bones and energy) — nearly 10 per cent of your recommended daily intake — that same amount of boiled kale has 8mg magnesium. 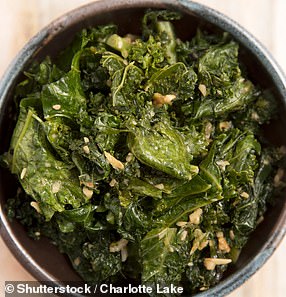 A quick stir-fry in oil boosts the nutrient content as it helps the body better absorb fat-soluble compounds such as beta carotene, which the body uses to make vitamin A.

Wilting it with heat helps cut the content of goitrogens — compounds that in large amounts can interfere with the thyroid gland.

And tellingly, there was also ‘no difference’ in the number of medications. In other words, the ‘pill popping’ that concerns Matt Hancock, didn’t diminish. Another study that looked at the impact of a two-year social prescribing pilot project on 585 patients at 22 surgeries in the London Borough of Hackney found changes in health and wellbeing ‘were very limited’.

Meanwhile, a paper in the journal BMC Health Services Research in 2017 concluded that ‘whether social prescribing can contribute to the health of a nation for social and psychological wellbeing is still to be determined’.

But in the rush to embrace healthcare’s next big thing, no one is waiting around for evidence.

‘Obviously the evidence base is less developed than that for pharmacological therapy as a whole,’ a spokesperson for NHS England told Good Health. ‘The roll-out is intended to help build the evidence on what works.’

Yet social prescribing is already one of ten ‘high impact actions’ embedded in the NHS Time For Care programme, designed to reduce pressure on GPs. In May last year the Royal College of GPs (RCGP) demanded that every surgery should be funded to hire a social prescriber ‘in a bid to tackle crippling GP workload’. 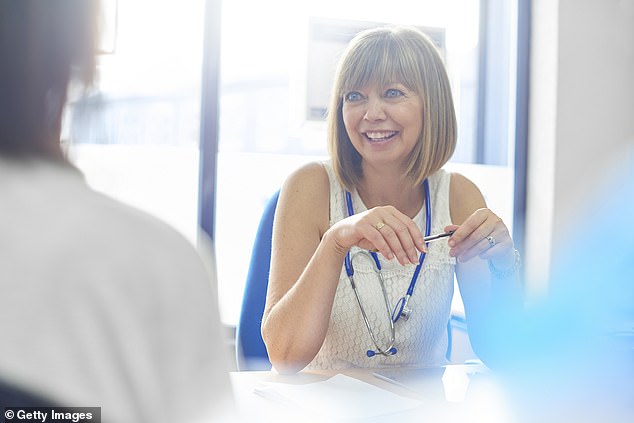 Last year almost 70,000 patients were referred to 331 link workers. NHS England said ‘the evidence is clear’ that ‘link workers are able to give patients helpful advice on underlying issues’ (stock)

Professor Helen Stokes-Lampard, chair of the RCGP, told Good Health that while social prescribing ‘isn’t a silver bullet to the pressures facing the NHS’, often ‘the underlying reason for someone visiting their GP is not medical’.

For these patients, ‘a recommendation to join an exercise class or community group or learn a new skill can be hugely beneficial — more so than a traditional prescription for medication’.

She added: ‘We hear wonderful stories about how social prescribing is transforming people’s lives’ and there was ‘some evidence’ that it ‘can free up GPs’ time for patients . . . who really need our medical expertise’. But that evidence is slight at best.

A 2017 study by the University of Westminster cited by the college identified only seven papers that looked at the effect of social prescribing on demand for GP services. Although reported reductions had averaged 28 per cent, the poor quality of the studies meant these results needed ‘to be interpreted with caution’.

The review concluded that while evidence for social prescribing was ‘broadly supportive of its potential to reduce demand’ or deliver savings, the quality of evidence was so weak ‘it would be premature’ to conclude this was certain.

Yet ‘despite these findings, social prescribing continues to grow in scope and scale across the UK’.

So why does this matter? After all superficially, social prescribing might appear harmless and jolly nice for patients. But with no long-term or valid ‘gold standard’ comparison studies, no one can say if attempts to ‘treat’ someone in this way might prove harmful for vulnerable patients — especially those with depression or anxiety — and critics say a fundamental principle of medicine is being trampled in the rush to embrace the idea.

‘Does NHS England want the NHS to be evidenced-based or is it content to countenance quackery?’ said Dr Richard Rawlins, an honorary consultant orthopaedic surgeon at Bedford Hospital and the author of the book Real Secrets Of Alternative Medicine. ‘Are patients giving informed consent? Do they know there is precious little evidence that social prescribing will help them?’

Dr Edzard Ernst, an emeritus professor of complementary medicine at Exeter University, fears social prescribing ‘is in danger of becoming a tool for people who want to smuggle dubious alternative therapies into the NHS’.

‘For example, I know of no good evidence that yoga improves health outcomes when prescribed in this way. What next? Crystal healing? Homeopathy?’

In June Christopher Dayson, a principal research fellow at the Centre for Regional Economic and Social Research at Sheffield Hallam University, told the first International Social Prescribing Research Conference in Salford that it was time to ’emancipate social prescribing from the tyranny of proof and move away from a narrow focus on cause and effect’.

As he explained to Good Health, ‘people who access social prescribing are positive about their experience and the benefits for their wellbeing and quality of life’. He added that their responses should be considered as valuable as other types of evidence used in standard studies. But anecdotal endorsement is

not normally accepted in lieu of concrete evidence in healthcare — spending money on treatment that’s not shown to benefit health outcomes would not be countenanced if that treatment was a new drug.

In 2015, York University, funded by the NHS’s own National Institute for Health Research, prepared an evidence briefing on social prescribing.

It concluded that the available evidence ‘fails to provide sufficient detail to judge either success or value for money’.

Nothing has changed since, says co-author Paul Wilson, a senior research fellow at the Alliance Manchester Business School. ‘The reality of the evidence base for social prescribing is a mess. Social prescribing will only be of value if its benefit can be demonstrated.’

Its advocates, he says, should heed the words of Archie Cochrane, the pioneer of evidence-based medicine as key to ensuring new medical treatments were both safe and effective.

‘Cochrane said that only effective treatments should be free on the NHS. His words may have been written 50 years ago but they still offer a reality check to the rhetoric of faith-based medicine today.’