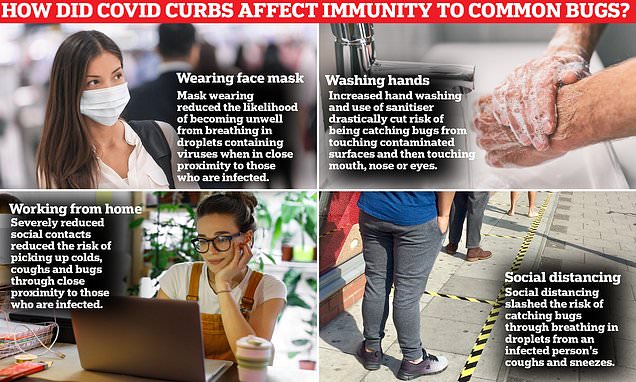 Why are so many of us falling sick with ‘winter’ bugs this SUMMER? Lack of mingling during the pandemic has meant normally harmless infections are causing misery for millions

Colleagues are dropping like flies and every time you step on public transport at the moment you are met by a chorus of coughs.

It’s not just anecdotal, either. GP surgeries and hospitals are recording higher than usual levels of patients with colds and stomach bugs that normally don’t rear their ugly heads until the depths of winter.

What makes it even more unusual is that the UK is enjoying one of its hottest summers on record.

Much was made during the pandemic about how hot temperatures drive us outside, where infections normally find it harder to spread, and how direct sunlight kills pathogens as they spread through the air or linger on surfaces.

And yet, not only are infections up, the severity of illnesses also appear to be more extreme than normal.

Shannan Tims, 30, from London, revealed she was hit so hard by a stomach illness earlier this month that she phoned an ambulance mistaking it for food poisoning.

The sustainability manager suffered intense sickness and stomach cramps for two days after attending a wedding — the biggest event she’d been to since 2019.

Experts believe it is that lack of mingling for the past three years that is causing these unseasonal resurgences.

They say there is no sign that there are more or different viruses circulating than normal, just that more people are becoming ill.

While virus curbs reduced the risk of coming into contact with Covid, they also squashed the likelihood of catching normally mild seasonal illnesses.

Professor Paul Hunter, an infectious disease expert at the University of East Anglia, said the immune system needs to be regularly fighting off bugs to stay strong.

And because immunity is so short-lived, even going a few months without much contact can leave people vulnerable to normally-harmless infecitons.

He said: ‘In general, the severity of reinfections is lower when those reinfections are closer together than when years apart. 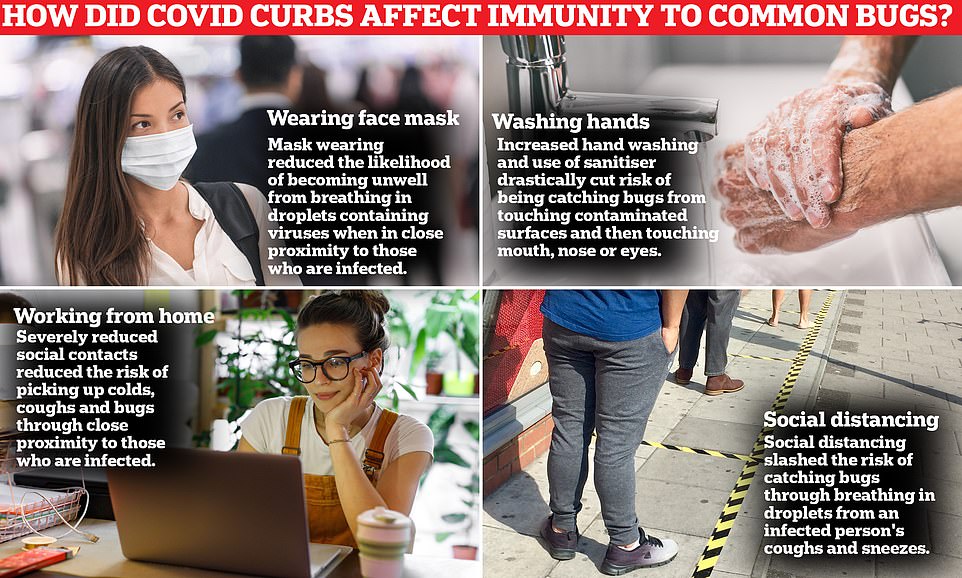 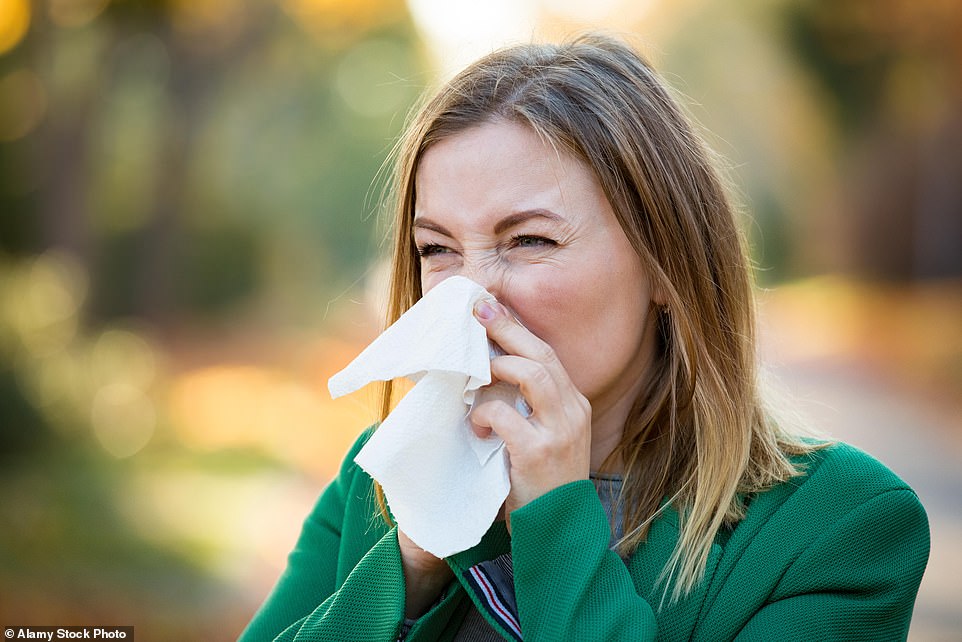 The rise in sickness, which is usually only associated with the colder months, has been reported by GP surgeries and hospitals across the UK 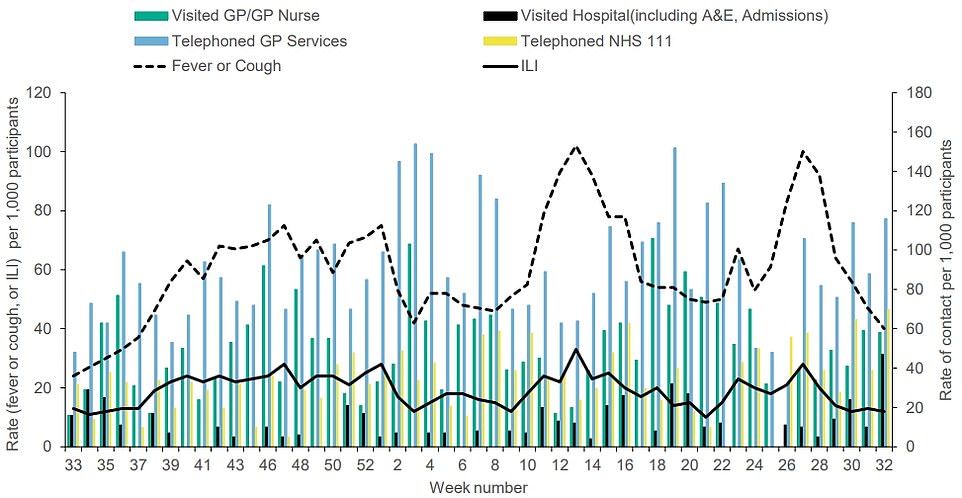 The graph shows the rate of flu-like symptoms in the population, such as fevers, headaches, muscle pain, a cough, sore through or shortness of breath, based on more than 2,000 Britons who self-report their symptoms to the UK Health Security Agency every week. It shows that the number of people visiting a GP or nurse with flu-like symptoms hit 58 in the week to August 14, up from 49 one year earlier. And the number showing up at emergency departments jumped from 16 to 47 over the same time period

This means a person is infectious for around two weeks.

People can become infected if they touch objects or surfaces contaminated with infected droplets and then touch their mouth, nose or eyes.

They may also become ill if they breathe in droplets of fluid that contain the virus, which are launched into the air through coughs and sneezes.

Contagious illnesses spread most easily among groups of people in constant close contact, such as families and children in school or nursery.

They’re also more frequent during the winter, although it’s not clear exactly why.

A number of different viruses can cause a cold-like symptoms, so it’s possible to have several colds one after the other, as each one may be caused by a different virus.

The immune system is a complex network of cells, tissue and organs that work together to protect the body against bacteria, viruses, parasites and fungi that enter through the mouth, nose or cuts.

The system keeps foreign invaders out of the body, or harnesses antibodies and T cells to fight them if they breach its defences.

Regular exposure to pathogens boosts the immune response against them and means people become less unwell.

This understanding — labelled the hygiene hypothesis — means that not coming into contact with viruses leave the immune system less able to protect against infection.

Before the pandemic, Britons were regularly exposed to viruses. It was normal for adults to suffer two to four colds a year, while children could catch as many as 12.

But from March 2020, people severely reduced their interactions with others and drastically increased their hygiene levels by upping hand washing.

These steps ‘reduced the spread of many infectious agents’, Professor Andrew Easton, a molecular biologist at the University of Warwick, explained.

This left people more susceptible to infection when they do come into contact with bugs, as the immune response against them wanes over time, he told MailOnline.

GPs have complained about high rates of patients turning up at practices with sickness usually linked with winter — including coughs, colds and stomach bugs.

UK health chiefs quiz more than 2,000 Britons on their health every week as part of the National Flu Survey.

The number of people visiting a GP or nurse with flu-like symptoms hit 58 per 1,000 people in the week to August 14, up from 49 one year earlier.

And the number showing up at emergency departments jumped from 16 to 47 per 1,000, over the same time period.

Colds usually last from a few days to a couple of weeks. But Britons are complaining of being struck down for longer and getting back-to-back illnesses.

Professor Neil Mabbott, chair of immunopathology at the University of Edinburgh, told MailOnline said there are ‘many accounts’ of high rates of winter viruses spreading this summer. 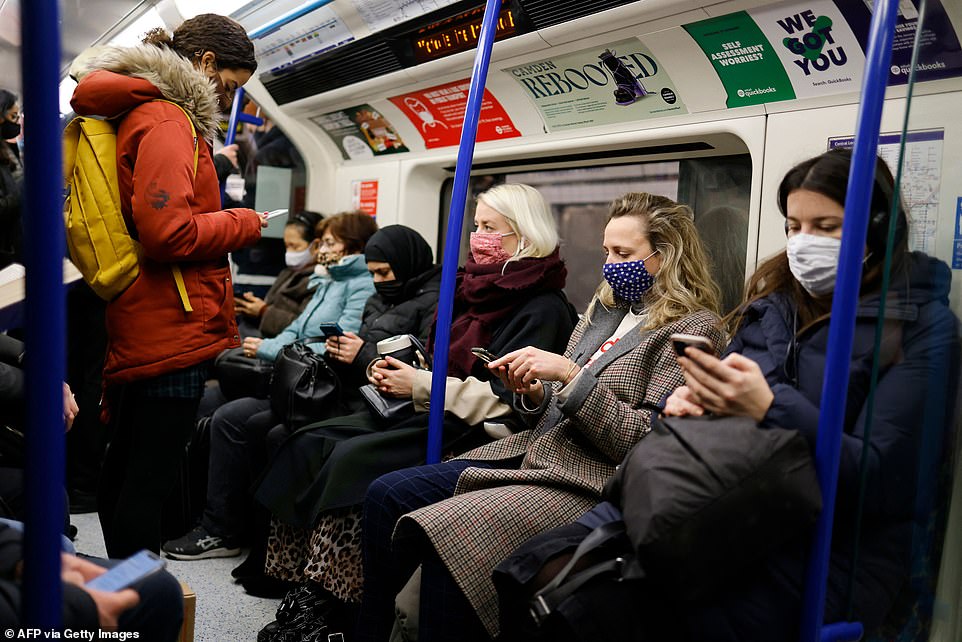 Before the pandemic, Britons were regularly exposed to viruses. But from March 2020, people severely reduced their chance of becoming infected, such as by wearing face masks and social distancing (commuters on the London Underground in January 2022 wearing masks) 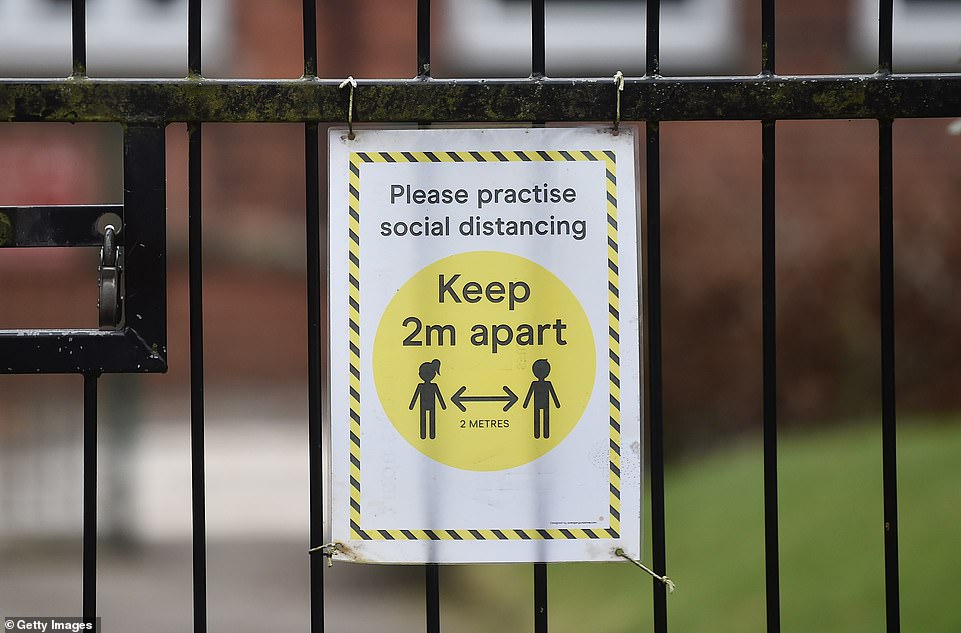 Britons also cut their social contact with others, following 2m distancing rules (Pictured: social distancing sign at a primary school in Congleton, England, in February 2021). These steps ‘reduced the spread of many infectious agents’, Professor Andrew Easton, a molecular biologist at the University of Warwick, explained

He said: ‘A major contributing factor is likely to be reduced natural immunity that would be typically acquired from natural infections in the winter months.

‘During the pandemic lockdowns there was much reduced mixing of populations, especially in closed indoor spaces.’

Professor Mabbott explained that natural immunity against common cold viruses after an infection only lasts around nine months.

So during the pandemic, many people ‘will not have acquired this seasonal natural immunity boost’, he said.

‘When people emerged from these measures, the opportunities for these viruses to spread increased, but unfortunately our immune systems were likely to be less effective at protecting against infection with them,’ Professor Mabbott added.

Some Britons have complained of suffering cold and flu-like symptoms for longer.

Dr Zania Stamataki, an associate professor in viral immunology at the University of Birmingham, told MailOnline that immunity to the viruses behind the common cold wane over two to three years.

‘Many of us have not been exposed to these viruses for a couple of years due to pandemic restrictions, so we almost need to re-educate our immune systems for these types of infections,’ she said.

‘This could be one explanation for it taking some longer currently to shake off a cold,’ Dr Stamataki added.

Despite lower levels of immunity, most healthy people will recover from the cold or bug within days or weeks without any treatment.

However, children, the elderly, pregnant women, the immunocompromised and those with respiratory conditions, such as asthma, may become more unwell.

Youngsters may have missed the usual exposure to viruses, while immunity wanes with age, leaving older Britons more at risk from bugs, Professor Eason explained.

Dr Stamataki said: ‘Parents of young children will notice that recurrent infections brought home by their little ones can take their toll, causing lung inflammation and exacerbation of asthma.’ 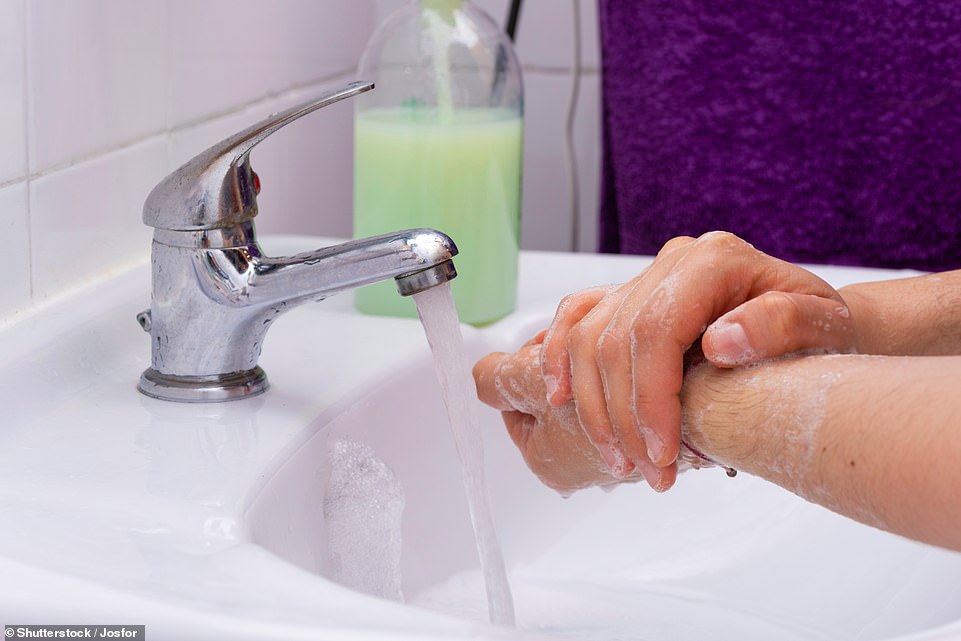 People can reduce their risk of becoming unwell by following good hygiene — such as regularly washing hands and sneezing into tissues — and staying at home when unwell to avoid passing on illnesses to others, experts say

Professor Eason infections should settle down and return to pre-pandemic patterns with time if social interactions continue as normal.

The seasonal illness pattern was disrupted previously during the 1978 ‘winter of discontent’ that saw widespread strikes against wage restrictions and storms.

This was caused by people staying at home during strikes and cold weather but the regular pattern of illness ‘returned the following year and remained stable until Covid came along’, Professor Eason added.

Professr Mabbott noted that it is ‘difficult to reliably predict how long this trend will continue’.

However, as immunity rises due to natural infections from bugs ‘we should begin to return to the typical seasonal pattern of increased rates of infection in the winter with much fewer, if any, in the summer months’, he added.

In the meantime, Dr Stamataki warned people against rushing to their GP for antibiotics. These only work against bacterial infection, rather than viral illnesses.

People can reduce their risk of becoming unwell by following good hygiene — such as regularly washing hands and sneezing into tissues — and staying at home when unwell to avoid passing on illnesses to others, the experts said.