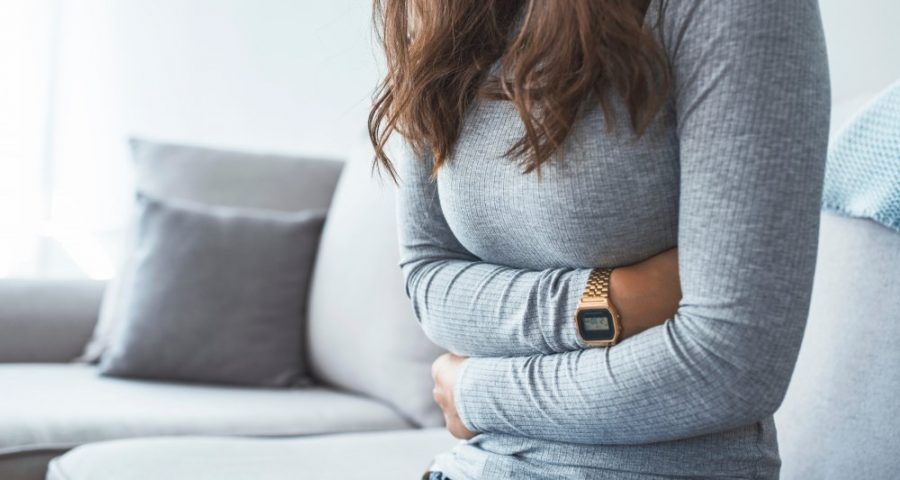 Polycystic ovarian syndrome (PCOS) is a hormonal condition that impacts more women than you think. Lena Dunham, for one, has been very vocal about her struggles in the past, and according to The Office on Women’s Health, PCOS actually affects one in ten women of childbearing age. In other words, it’s more than likely that someone you personally know suffers from this painful condition. But what exactly is PCOS and when you have it, what happens to your body?

According to Sherry Ross, M.D., an Ob/gyn and women’s health expert at Providence Saint John’s Health Center, PCOS is hard to explain (via Shape). In the most simple terms, it’s a syndrome caused by an imbalance of reproductive hormones, which causes difficulty with ovulation and small cysts on the ovaries. However, it’s difficult to diagnose, and more often than not it is the symptoms of PCOS and ultimately how it affects your body that are the most telling. Beyond having trouble getting pregnant, this is what happens to your body when you have PCOS.

PCOS has a significant impact on your menstrual cycle

One of the most common symptoms of PCOS is how it impacts your menstrual cycle. “Our menstrual cycle is like a vital sign,” Maryam Siddiqui, MD, assistant professor of obstetrics-gynecology at the University of Chicago Medicine, told Self. “It tells us if our metabolism is in a good state; if you’re too thin, overweight, or stressed, that can throw your cycles off.” But the thing those with PCOS notice happening to their body is actually not having periods at all (or only a couple a year). “Having irregular periods or more likely, skipping multiple periods could be a sign of a hormonal imbalance like PCOS,” Siddiqui explained. If you’ve had less than eight periods in the past year, it may be worth chatting to your doctor to see if you have PCOS, or another condition that may explain the irregularity.

Another thing that happens to your body when you have PCOS is hair growth. “You’ll get hair growth in funny places — around the nipples, on your chest, the inside of your thighs, and your belly,” Siddiqui told Self, adding, “Places were women don’t typically have a lot of hair growth.”

However, dermatologist Joshua Zeichner notes this is not always the case. “If women develop dark hair in areas where men typically have it — lip, chin, neck, stomach, chest — there may be a hormonal imbalance,” he told Allure. “In some cases there may a testosterone excess, but in others, women may just be extra-sensitive to what appears to be a normal level of hormones,” he continued. Still, if you haven’t been diagnosed with PCOS but you have noticed some unusual hair growth, it’s definitely worth taking some time out of your busy schedule to see a doctor.

PCOS can affect your weight

Unfortunately, PCOS not only leads to weight gain, especially around your middle, but makes it more even difficult to lose weight than usual (if that even possible!). “With PCOS, you can have trouble metabolizing blood sugar, known as insulin resistance,” Siddiqui says. “When you have insulin resistance, your pancreas has to work really hard and make a lot of insulin just to lower your blood sugar. That is linked to weight gain and central obesity.”

Worse still, it affects your body and weight so much that usually having PCOS means you need to change up your diet and lifestyle. And for this reason, many women develop issues with food. “It is not uncommon for women with PCOS to develop an eating disorder, such as binge eating and yo-yo-dieting,” Rekha B. Kumar, MD, MS, an endocrinologist who specializes in weight and metabolism at New York Presbyterian Hospital, told Prevention.

Acne is a common symptom associated with PCOS

“About 70 percent of patients with PCOS will suffer from some form of acne,” Dr. Amelie Seghers, consultant dermatologist at the Cadogan Clinic in the UK, revealed to Popsugar. Like abnormal hair growth, this is due to the testosterone excess. As GP skin specialist Dr. Ross Perry, also based in the UK, added, “An excess of male hormone can trigger the excess sebum in the skin and dead skin cells that get trapped in the hair follicles, causing breakouts.” Sadly, it’s also more likely that acne caused by PCOS is actually harder to combat than regular acne.

Like most medical syndromes, everyone suffers differently. While one PCOS sufferer may experience hair growth and missed menstrual cycles, others may only experience mild acne and a little weight gain. If you’re yet to be diagnosed but think you may have PCOS, continue to listen to your body and consult your doctor.