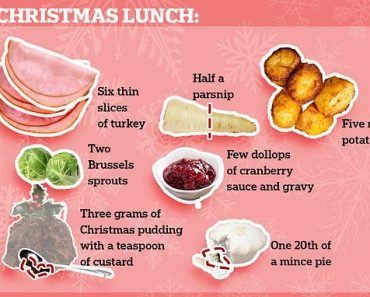 One 20th of a mince pie, half a parsnip and a quarter glass of Champagne: What Christmas dinner looks like if you stick to the recommended daily calories

With mulled wine simmering and Christmas pudding’s aflame, the last thing that will cross most people’s mind on December 25 will be how many calories they are consuming.

But research suggests that in order to meet official dietary guidelines, the average man should indulge in just one 20th of a mince pie, half a parsnip and a quarter of a glass of champagne.

For dessert, he’d be limited to three grams of Christmas pudding with a measly teaspoon of custard.

Commissioned by the Taxpayer’s Alliance, the researched established ‘what a public health puritan-approved Christmas lunch would look like’ based on NHS guidelines and alcohol guidance from Drinkaware. 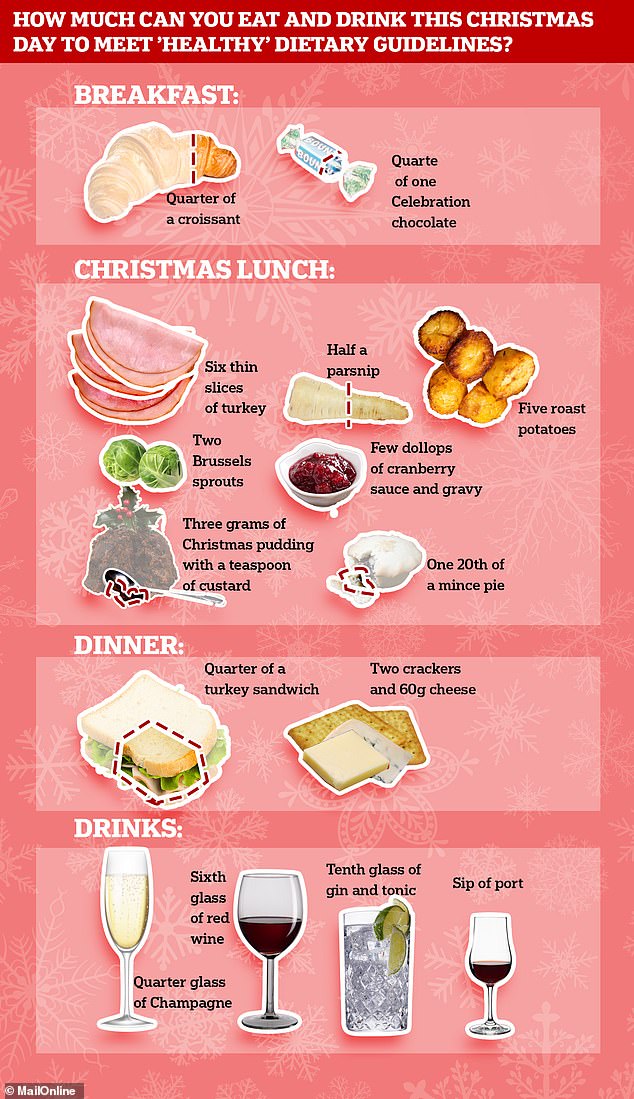 The ‘nanny state’ approved Christmas lunch is made up of six thin slices of turkey, half a parsnip, five small roast potatoes, two Brussels sprouts, a few dollops of cranberry sauce and gravy, one 20th of a mince pie and three grams of Christmas pudding with a teaspoon of custard. The amounts are based on NHS and Drinkaware guidelines for an average male

Over a normal day, a man is advised to consume no more than six grams of salt, 30g of sugar, 30g of unsaturated fat and a total of 2,500 calories.

On Christmas, this is sure to go out the window, when sugar and fat-laden foods are enjoyed from breakfast onward.

But based on official guidelines, the ‘most important meal of the day’ only allows for a quarter of a croissant, a quarter of a Celebrations chocolate and 15ml of orange juice.

If a man observing his calories wanted to drink on Christmas Day, he would be lucky to fit in just a tenth of a gin and tonic or a sip of port, according to the research.

For dinner, he could enjoy a quarter of a turkey sandwich with two crackers and 60g (2oz) of cheese, washed down with a quarter of a glass of red wine.

Public Health England has spent more than £41.7 million of taxpayers’ money ‘telling Brits what they can and cannot eat, drink and do in their leisure time’, the authors said in their research, published on the Taxpayer’s Alliance’s website.

John O’Connell, chief executive of the campaign group, said: ‘All year long taxpayer-funded public health Tsars tell us what to eat, drink and how to spend our leisure time.

‘If they had it their way, we would be eating nothing but salad and Brussels sprouts this Christmas, with a meagre sliver of a mince pie for pudding.

‘I wonder if public health officials this year will be practising what they preach by following their own overbearing guidelines?’

Filling up on vegetables is a tactic used by many watching their weight, but even those portions are tight, with just one fifth of a portion of red cabbage being within the guidelines. 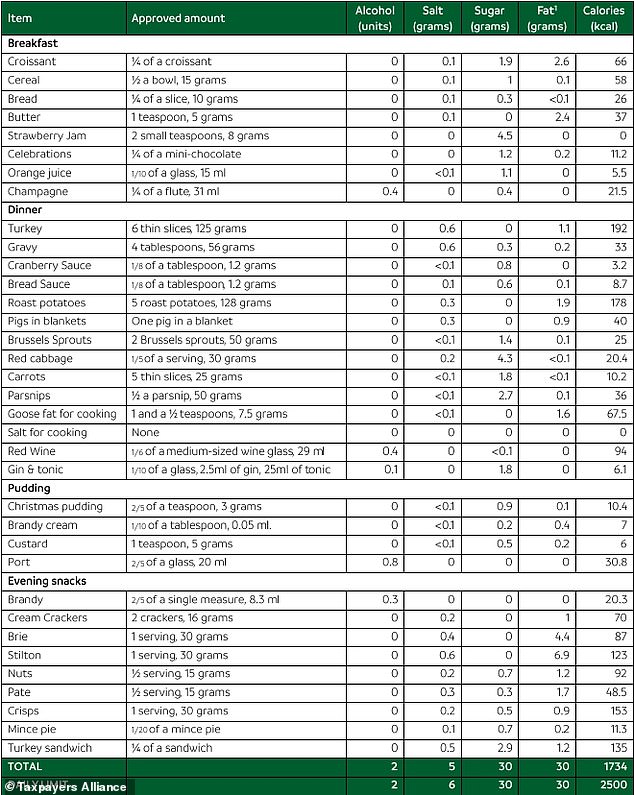 What a male would be able to eat over the course of Christmas day if he were to be within guidelines set by the government and Drinkaware, according to the researchers

‘That’s because plants contain a compound called cellulose. It helps cells hold their structure but is rich in calories.

‘Digestive enzymes in the stomach can’t break cellulose down when we eat vegetables raw. But cooking releases more of it, giving greater access to the energy inside the plant cells.

‘The longer veg is cooked, the more cellulose is broken down and the more calories we absorb.’

‘Cooking methods for meat, including the Christmas turkey, have a similar effect – unlocking secret calories,’ he said.

‘While some supermarkets may record content in the meat’s raw state, cooking – depending on the method – can boost the amount you absorb by almost 50 per cent.

‘This is because cooking meat fully, or for long periods, releases extra calories that are tied up in muscle fibres we would not be able to access if we ate the meat raw.’

HOW MUCH EXERCISE DOES IT TAKE TO BURN OFF CHRISTMAS TREATS?

In a study by the university of Birmingham and Loughborough, participants were given a list of roughly how much physical activity would be needed to burn off approximate calories found in popular food and drinks consumed at Christmas: