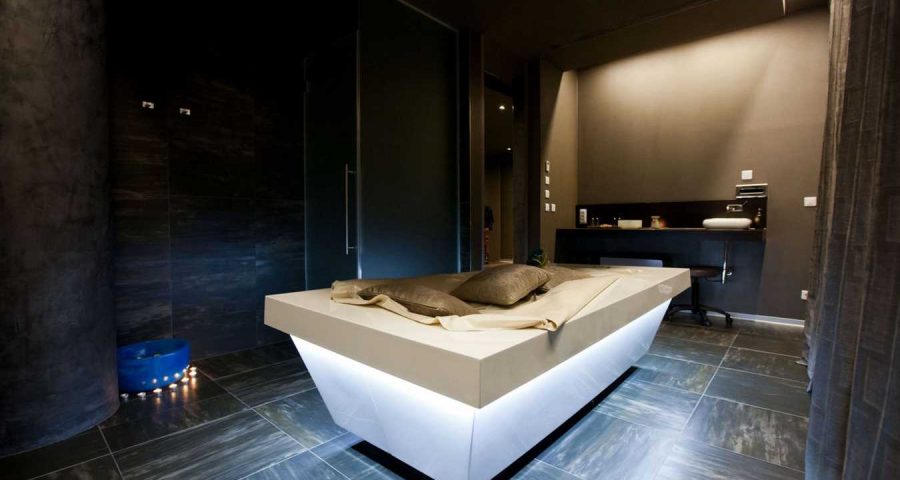 What It Is: A dry flotation spa treatment allows you to float effortlessly to relax without getting wet. One 30-minute session is $135.

Level of Difficulty: 0/10, (This is on a scale of 1-10 but I want to emphasize the total lack of effort here. You’re even getting a break from gravity!)

You may have seen a dry flotation soft pack bed in your local mall, but don’t try it there — you want a calm, private, professional environment to try this spa treatment. A good way to experience it is right after a massage, which is what I did at The Reeds Salt Spa in Stone Harbor, New Jersey.

Dry flotation is different than float therapy, says Carolyn Holdsworth, licensed esthetician and Executive Director of Salt Spa. “That’s important to mention, as there are a plethora of float therapy spas popping up all over,” she says. “Float Therapy uses baths filled with water and tons of epsom salt, which is intended to deeply nourish and to remove toxins. Dry flotation is completely different, in that the focus is on relaxation of the muscles, the joints and imparts a feeling of weightlessness and deep relaxation.”

Holdsworth recommends the bed as an add-on to your favorite spa treatment. She says it compliments a massage and also helps skin products to absorb fully. “For any client who is seeking maximum relaxation and the ultimate effect from their body treatment products, this is the way to make that happen. There is no other way to ‘speed up’ the results outside of adding this treatment to your therapy.”

So after a one-hour massage, I crawled into what looked like a simple twin bed with a frame around it. Many dry flotation soft pack beds are temperature controlled, so it’s warm and inviting and has comfy blankets as well. Although not well-known, these beds have been in spas for many years. I tried a Kurland brand one, and the cost ranges from $20,000 – $30,000 per bed.

There’s a soft whirring sound as they turn on the bed, and in this moment I didn’t feel totally convinced that I was not going to get wet. You hear the water rushing in, but it’s filling the bag you are laying in, so you don’t get damp at all.

RELATED: We Tried Running Up All 1,576 Stairs of the Empire State Building

Prior to trying the bed, Holdsworth told me “it feels like being in the womb,” which made me grimace. First, I definitely do not remember what that feels like, and second, that did not sound entirely appealing to me.

But, I admit — she was right. I don’t know if it was simply the power of suggestion, but I did think “womb” immediately once the bag filled and I was floating. It was entirely pleasant and comforting, and although I have no science to support this, it felt as though some primal neurons fired in my brain that had not been active since infancy. There was a vast feeling of calm and inclusion that helped me to relax more fully than even the best massage has done for me.

The floating sensation is different than, say, floating on an inflatable in the pool. You aren’t subject to ripples in the water, so you’re not subconsciously anticipating any movement or adjusting. Instead of a pool float, it’s more like a water bed and a hammock got together and produced offspring. You’re floating, but you’re also hanging. I think it’s the closest I’ll ever get to weightlessness, unless Space X really gets going in my lifetime.

The real mind-blower is when the treatment is over and the liquid drains out of the bed. It happened slowly, so it wasn’t a shock, but I began to feel heavy, and then very heavy and then very, very heavy. I became aware of the pull of gravity that, of course, we don’t notice because it’s always with us. So, oddly, the most amazing part of the treatment happens just as it’s ending. Once I realized I had had a break from gravity, I felt a deep sense of relief from being free of it for 30 minutes.

The Verdict: If I was a millionaire, I would have one of these things in my house. It’s a truly new experience, and one that’s deeply therapeutic. I could drain away a lot of the day’s stress by hopping in this thing for half an hour in the evening. But since a $20,000 – $30,000 bed isn’t in my budget, I will consider revisiting the bed at a spa, although the treatment is still pretty expensive at $135. For someone with chronic joint, back or muscle pain, I think the cost could be fully worth it. And it’s also worth a try for regular spa goers who are looking for something novel.