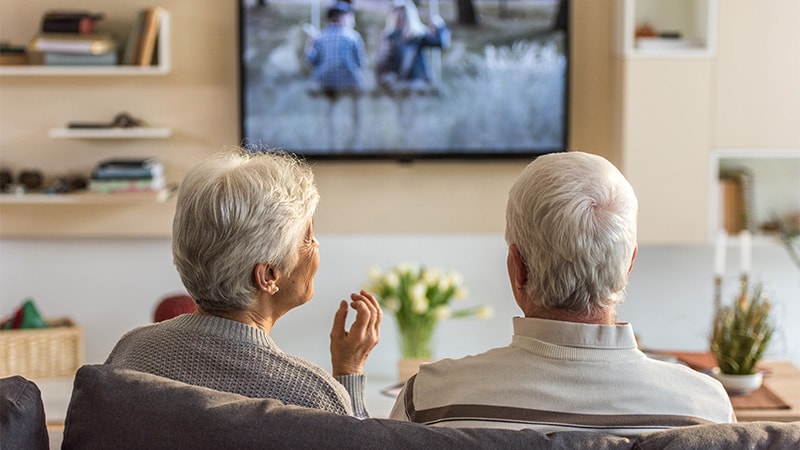 Watching TV may increase your risk of dementia, while using a computer may lower it, new research suggests.

The relationship to dementia with these activities remained strong no matter how much physical activity a person did, the authors wrote in Proceedings of the National Academy of Sciences.

Both watching TV and using a computer have been linked to increased risk of chronic disease and mortality, while exercise and physical activity (PA) have shown benefit in reducing cognitive decline, structural brain atrophy, and dementia risk in older adults, the authors wrote.

The authors said they wanted to try to understand the effects of watching TV and using computers on dementia risk, because people in the United States and Europe have been engaging in both of these activities more often.

They concluded that it’s not the sitting part of sedentary behavior (SB) that potentially has the effect on dementia but what people are doing while sitting.

Some of the results were surprising, lead author David Raichlen, PhD, professor of Human and Evolutionary Biology at University of Southern California, Los Angeles, said in an interview.

Previous literature on sedentary behaviors have documented their negative effects on a wide range of health outcomes, rather than finding positive associations, he explained.

The researchers conducted their prospective cohort study using data from the United Kingdom Biobank. After excluding people younger than 60, those with prevalent dementia at the start of follow-up, and those without complete data, 146,651 participants were included.

The participants were followed from their baseline visit until they received a dementia diagnosis, died, were lost to follow-up, or were last admitted to the hospital.

Similarly, the link with risk reduction for dementia with computer use increased with more use.

Raichlen pointed out that the high use of TV in this study was 4 or more hours a day and computer use – which included leisure use, not work use – had benefits on dementia risk after just half an hour.

One potential reason for the different effects on dementia risk in the two activities studied, the authors write, is that sitting down to watch TV is associated with “uniquely low levels of muscle activity and energy expenditure, compared with sitting to use a computer.”

Andrew Budson, MD, chief of Cognitive & Behavioral Neurology and Associate Chief of Staff for Education for the VA Boston Healthcare System, Mass., who was not part of the study, said he thinks a more likely explanation for the study findings lies in the active versus passive tasks required in the two kinds of viewing that the authors reference.

“When we’re doing cognitive activity involving using the computer, we’re using large parts of our cortex to carry out that activity, whereas when we’re watching TV, there are probably relatively small amounts of our brain that are actually active,” Budson, author of Seven Steps to Managing Your Memory, explained in an interview.

“This is one of the first times I’ve been convinced that even when the computer activity isn’t completely new and novel, it may be beneficial,” Budson said.

It would be much better to do physical activity, but if the choice is sedentary activity, active cognitive activities, such as computer use, are better than TV watching, he continued.

The results of the current study are consistent with previous work showing that the type of sedentary behavior matters, according to the authors.

“Several studies have shown that TV time is associated with mortality and poor cardiometabolic biomarkers, whereas computer time is not,” they wrote.

A limitation of the study is that sedentary behaviors were self-reported via questionnaires, and there may be errors in recall.

“The use of objective methods for measuring both SB and PA are needed in future studies,” they write.

The authors receive support from the National Institutes of Health, the State of Arizona, the Arizona Department of Health Services, and the McKnight Brain Research Foundation. Neither the authors nor Budson declared relevant financial relationships.