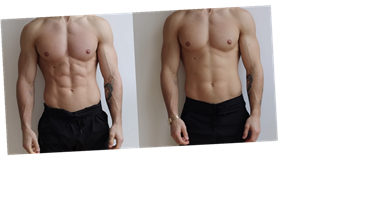 “The reason I don’t feel like myself is because I’m not shredded enough,” he says in a new YouTube video.

Delaney began a mini cut, or diet, for 14 days in order to lose weight and look more shredded. He documented the process in a new YouTube video called, “14 Day Fat Loss Transformation.”

According to Delaney, he advises most clients to lose weight more slowly over a period of 16 weeks. However, he wanted fast results after gaining weight during a trip to Paris.

Delaney started his cut at 179.2 pounds and consumed 2,400 calories per day, which is lower than what he’d typically eat to lose weight. However, the personal trainer explains he adjusted the daily calories to be lower since he’s dieting for a short period of time. Delaney consumes 180 grams of protein, 270 grams of carbs, and 66 grams of fat per day. Although he doesn’t follow a particular meal plan, Delaney typically consumes a mix of eggs and egg whites for breakfast. He ends each night with a bowl of oats.

During the cut, the trainer sticks to his typical weight lifting routine which is high volume and compound heavy, he explains.

At one point, Delaney veers outside his diet and eats more pasta and bread during a meal with his family. However, he decides to just move on and not let it deter him.

“What I’m going to do is ignore it and not weigh myself today,” he says.

Of course, weight loss is never delayed by a single meal, and Delaney still drops an impressive seven pounds. He ends his two-week cut at 172 pounds.

To view Delaney’s progress, check out the full video: