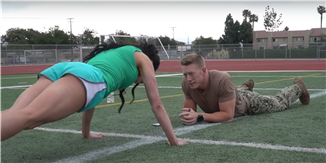 Ms. Bikini Olympia is strong, but is she Navy strong? In a YouTube video by Austen Alexander, the active duty Navy sailor challenges three-time Ms. Bikini Olympia Ashley Kaltwasser to complete the U.S. Navy Physical Readiness Test. If any rookie is ready for the challenge, it’s Kalwasser, given her impressive bodybuilding resume.

The physical readiness test, known as the Navy PRT, is a series of three timed physical fitness tests those in the Navy need to pass every six months. The Navy PRT includes two-minute timed tests of sit-ups and push-ups, with scores calculated on how many reps a recruit or veteran sailor successfully completes in the time frame. The test concludes with a 1.5 mile run to be completed as quickly as possible. Final scores are based on all three events, and are scaled for a participant’s age and gender.

“I am most worried about the sit-ups because honestly I haven’t trained abs in three years,” Kaltwasser says. Later in the video, she shows her impressively chiseled stomach, saying it shouldn’t fool viewers into believing she’ll be a curl-up pro. But during the trial, 30-year-old Kaltwasser hits 62 sit-ups, far surpassing the 44 sit-ups required of someone her age.

For push ups, Kaltwasser completed 58 reps, another high score for her age bracket. Then comes the mile and a half run, a difficult feat after pushing your limits in the previous timed tests.

“Every time she comes around, I’m gonna kick her and motivate her some more,” Alexander says during Kaltwasser’s mile. “That’s how we do it in the Navy. We motivate.”

Kaltwasser completes the mile and a half test in 11 minutes and 14 seconds. Totaled together, that means she passed the physical readiness test with impressive success. Kaltwasser’s score had her falling in the Excellent-High category, the fourth highest category for a woman her age.

“You mastered the sit-ups, you dominated the push-ups, and you destroyed that run,” Alexander tells Kaltwasser. “How do you feel?”

“I feel like I need a protein shake,” Kaltwasser laughs. “I’m sore.”

A week prior to the video, Alexander took his own bi-yearly Navy PRT, sharing that he completed 78 sit-ups and about 83 push-ups in his timed tests. He ran the mile and a half distance in 8 minutes and 45 seconds. Now that’s some fitness goals to reach for.