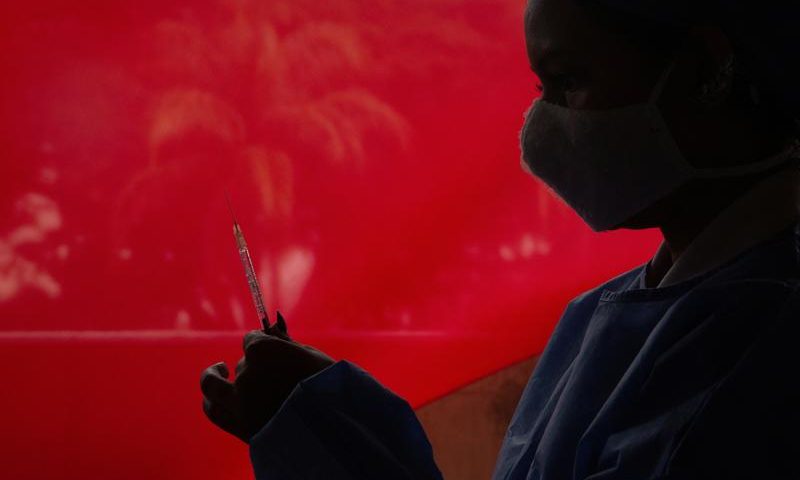 FILE PHOTO: A healthcare worker prepares a dose of Russia’s Sputnik V vaccine against the coronavirus disease (COVID-19), in the parking lot of the Social Security Institute of the Armed Forces, turned into a mass vaccination centre, in Caracas, Venezuela June 5, 2021. REUTERS/Leonardo Fernandez Viloria

CARACAS (Reuters) – Venezuelans are being turned away from appointments to receive their second shot of the coronavirus vaccine due to a shortage of doses, groups representing the South American country’s doctors and nurses warned on Monday.

Venezuela, with some 28 million inhabitants, has fully vaccinated just 0.8% of its total population, well below many of its peers in the region, Reuters data show. It began its mass vaccination campaign in late May, prioritizing seniors and health workers, amid long lines and confusion. (Graphic on global vaccinations) tmsnrt.rs/3tUM8ta

Now, some patients eligible for second doses – recommended for three weeks after the first for both vaccines Venezuela is administering, Russia’s Sputnik V and China’s Sinopharm – are being turned away due to a lack of supply despite having appointments, according to Jamie Lorenzo, director of the Doctors United for Venezuela advocacy group.

“Before beginning a vaccination process, you must be sure of vaccine supply so that once you begin, you don’t run out,” Lorenzo, a general surgeon overseeing the grouping of some 4,000 health workers in the country, told reporters.

Venezuela’s information ministry did not immediately respond to requests for comment. President Nicolas Maduro’s government, which has overseen a profound economic crisis, has blamed U.S. sanctions for the country’s difficulties in acquiring vaccines.

A second shot of either vaccine will still help boost immunity even if it is delayed up to 90 days after the first, Lorenzo said. But the denial of second doses to patients with appointments is contributing to a sense of “anarchy” at mass vaccination sites, he said.

Ana Rosario Contreras, the president of the Caracas college of nurses, called the vaccine supply situation “dire” and called on Maduro to procure more doses.

Venezuela has officially reported some 260,740 coronavirus cases and 2,958 deaths, though many specialists believe the true figures are higher. (Graphic on global cases and deaths) tmsnrt.rs/34pvUyi