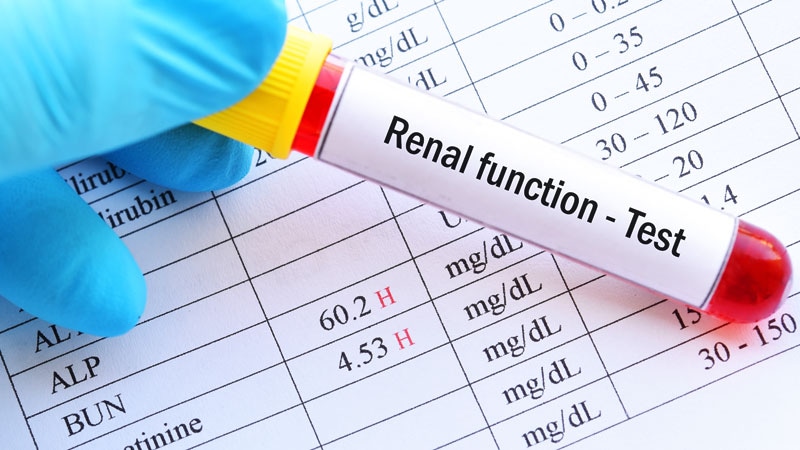 Starting immediately, the race coefficient should be thrown out of the equation for calculating estimated glomerular filtration rate (eGFR), a measure of kidney function, for US residents, a Task Force organized by the American Society of Nephrology (ASN) and National Kidney Foundation (NKF) has declared.

Other experts, as well as these two organizations, are eagerly embracing the recommendation.

In place of the currently prevailing equation for calculating eGFR — which was introduced in 2009 and uses a race-based modifier for people who self-identify as Black — in its final report the Task Force endorsed use of two new race-neutral equations recently derived and validated by the Chronic Kidney Disease-Epidemiology (CKD-EPI) Collaboration group, which developed the 2009 equation.

Of the two new equations, one, CKD-EPIcr_R, relies entirely on serum creatinine levels — by far the most commonly used method in US practice for calculating eGFR. The other, CKD-EPIcr-cys_R, also incorporates measurement of cystatin C.

The latter equation is more accurate, but testing for cystatin C is expensive, not yet widely available, and usually involves a much longer turnaround time, said the Task Force.

The two new equations were published online for the first time today in The New England Journal of Medicine.

Concurrent with release of the Task Force’s report, the NKF has revised its online eGFR calculator so that it is now based on the new equations, another step toward making the new calculations mainstream.

Widespread Adoption Within the Next Year?

Use of the race coefficient in the formula for calculating eGFR has meant that Black patients may miss out on timely treatment and may end up waiting years longer than others to be listed for kidney transplant.

Experts involved hope the changes will quickly be incorporated into routine practice.

Paul M. Palevsky, MD, NKF president and renal section chief at the VA Pittsburgh Healthcare System, Pennsylvania, said in an interview he was hopeful that widespread adoption of the Task Force’s recommendations and use of the new equations could occur within the next year.

“The NKF and ASN urge all laboratories and healthcare systems nationwide to adopt this new approach as rapidly as possible so that we can move towards a consistent method of diagnosing kidney diseases that is independent of race,” he noted in a statement.

Representatives from the NKF have already had conversations with leaders of major US testing laboratories to prepare them for the change, he added, noting he expects rapid compliance because “they have bought into what we’re trying to achieve.”

“My dream is that we will soon have a routine multi-test ‘kidney panel’ that would report both creatinine and cystatin C levels,” he said.

Nephrologists not involved with the Task Force or the CKD-EPI Collaboration also expressed support.

“I am fully and completely supportive of the recommendation to immediately implement the 2021 CKD-EPI creatinine equation without the race coefficient,” commented Rajnish Mehrotra, MD, interim head of the Division of Nephrology at the University of Washington in Seattle.

ASN and NKF jointly formed the Task Force in July 2020, and in April this year, they released an interim report that described the process the group was undertaking.

A fortuitous coincidence was that just as the Task Force began its search for replacement equations, the CKD-EPI Collaboration — formed in 2003, based at Tufts Medical Center in Boston, Massachusetts, and funded by the NKF — was finalizing its derivation and validation of new formulas that don’t rely on a coefficient for Black individuals.

The CKD-EPI Collaboration project was a separate activity from the work of the Task Force.

But a codirector of the CKD-EPI Collaboration, Lesley A. Inker, MD, was also a member of the Task Force. “I received permission from CKD-EPI to share our unpublished results with the Task Force so that our data on both approaches [based on creatinine alone or on creatinine and cystatin C] could be part of the deliberations,” said Inker in an interview.

“We have been working for over a decade to increase our data in diverse populations that well positioned us to answer the question about inclusion of race in GFR-estimating equations,” she said.

“In my view, we are now ready for immediate implementation of the new 2021 CKD-EPI creatinine and creatinine-cystatin C equations without need for future validation,” noted Inker, director of the Kidney and Blood Pressure Center at Tufts Medical Center.

While the Task Force emphasizes that the CKD-EPIcr-cys_R equation that relies on both cystatin C and creatinine levels should be considered the preferred one because of its improved accuracy, and it “would support better clinical decisions than either one marker alone,” it nevertheless notes the current logistic limitations that hamper routine collection of cystatin C values.

“Cystatin C is an unfeasible assay to replace current eGFR reporting methods for immediate implementation in all laboratories,” the report states.

So for the near-term, the CKD-EPIcr-cys_R may need to function as a confirmatory test, it says.

Helping drive support for the new equation has been a growing appreciation among nephrologists and other clinicians of the inappropriate messages conveyed by using the race coefficient, as well as other ways in which race inappropriately intrudes into US medical practice.

Using race as a factor in calculating eGFR “reinforces a false concept that race determines kidney function,” said Palevsky. “Even if the numerical differences in eGFR [between the old and new equations] are small, the implications are large. The new approach will help reduce disparities and inequalities” in medical care, he maintained.

The Task Force’s recommendations were designed to “not disproportionately disadvantage patients from any particular racial or ethnic group,” explained Neil R. Powe, MD, cochair of the Task Force and leader of the Medicine Service at San Francisco General Hospital, California, in a written statement.

He expressed hope that efforts to introduce new and improved methods for assessing kidney function “unite all of us in a focus on interventions to eliminate health disparities.”

Some of the documentation of the superiority of cystatin C-based calculations of eGFR appeared in both the CKD-EPI Collaborative report on the new equations, as well as an accompanying report in The New England Journal of Medicine that assessed the impact of removing the race coefficient from earlier eGFR equations.

“Both articles showed that equations based on cystatin C yielded lower predictive bias and greater agreement with measured GFR across race groups than GFR estimates based on creatinine alone,” summed up an accompanying editorial in The New England Journal of Medicine that covered both reports.

“Use of cystatin C measurements should be encouraged and funded,” recommends the editorialists.

A key next step toward more widespread availability for cystatin C testing will be adoption of the measurement into clinical practice guidelines by the Kidney Disease Outcomes Quality Initiative, a step that would pave the way for wider availability of assays and insurance coverage, said Palevsky.

This goal of a routine “multi-test ‘kidney panel'” is likely at least a couple of years away, Palevsky acknowledged, but he also stressed that it’s a goal that the NKF and ASN “are committed to work towards.”

Palevsky, Powe, and Inker have reported no relevant financial relationships. Mehrotra has reported being a consultant for Zytoprotec.

Mitchel L. Zoler is a reporter with Medscape and MDedge based in the Philadelphia area. He’s on Twitter: @mitchelzoler