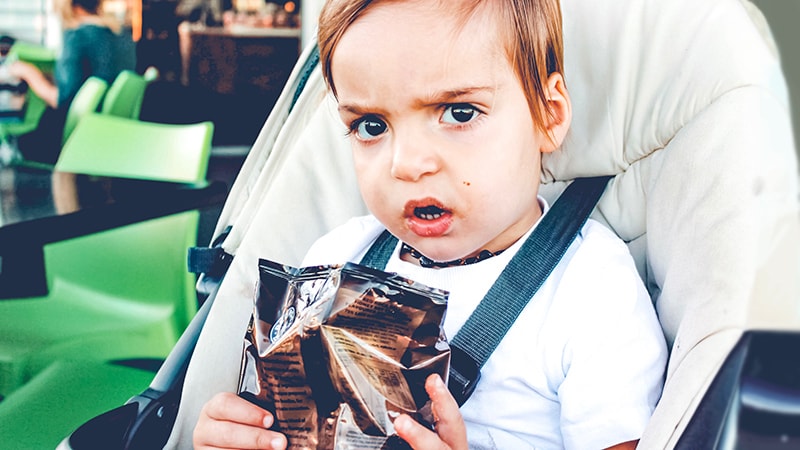 In the 2 decades from 1999 to 2018, ultraprocessed foods consistently accounted for the majority of energy intake by American young people, a large cross-sectional study of National Health and Nutrition Examination Survey (NHANES) data shows.

In young people aged 2-19 years, the estimated percentage of total energy from consumption of ultraprocessed foods increased from 61.4% to 67.0%, for a difference of 5.6% (95% confidence interval [CI] 3.5-7.7, P < .001 for trend), according to Lu Wang, PhD, MPH, a postdoctoral fellow at the Friedman School of Nutrition Science and Policy at Tufts University in Boston, and colleagues.

“The estimated percentage of energy consumed from ultraprocessed foods increased from 1999 to 2018, with an increasing trend in ready-to-heat and -eat mixed dishes and a decreasing trend in sugar-sweetened beverages,” the authors wrote. The report was published online Aug. 10 in JAMA.

The findings held regardless of the educational and socioeconomic status of the children’s parents.

Significant disparities by race and ethnicity emerged, however, with the ultraprocessed food phenomenon more marked in non-Hispanic Black youths and Mexican-American youths than in their non-Hispanic White counterparts. “Targeted marketing of junk foods toward racial/ethnic minority youths may partly contribute to such differences,” the authors wrote. “However, persistently lower consumption of ultraprocessed foods among Mexican-American youths may reflect more home cooking among Hispanic families.”

Food processing, with its potential adverse effects, may need to be considered as a food dimension in addition to nutrients and food groups in future dietary recommendations and food policies, they added.

“An increasing number of studies are showing a link between ultraprocessed food consumption and adverse health outcomes in children,” corresponding author Fang Fang Zhang, MD, PhD, Neely Family Professor and associate professor at Tufts’ Friedman School of Nutrition Science and Policy, said in an interview. “Health care providers can play a larger role in encouraging patients — and their parents — to replace unhealthy ultraprocessed foods such as ultraprocessed sweet bakery products with healthy unprocessed or minimally processed foods in their diet such as less processed whole grains.”

In Zhang’s view, teachers also have a part to play in promoting nutrition literacy. “Schools can play an important role in empowering children with knowledge and skills to make healthy food choices,” she said. “Nutrition literacy should be an integral part of the health education curriculum in all K-12 schools.”

Commenting on the study but not involved in it, Michelle Katzow, MD, a pediatrician/obesity medicine specialist and assistant professor at the Feinstein Institutes for Medical Research in Manhasset, N.Y., said the work highlights an often overlooked aspect of the modern American diet that may well be contributing to poor health outcomes in young people.

“It suggests that even as the science advances and we learn more about the adverse health effects of ultraprocessed foods, public health efforts to improve nutrition and food quality in children have not been successful,” she said in an interview. “This is because it is so hard for public health advocates to compete with the food industry, which stands to really benefit financially from hooking kids on processed foods that are not good for their health.”

Katzow added that the observed racial/ethnic disparities are not surprising in light of a growing body of evidence that racism exists in food marketing. “We need to put forward policies that regulate the food industry, particularly in relation to its most susceptible targets, our kids.”

The serial cross-sectional analysis used 24-hour dietary recall data from a nationally representative sample from 10 NHANES cycles for the range of 1999-2000 to 2017-2018. The weighted mean age of the cohort was 10.7 years and 49.1% were girls.

Not surprisingly, ultraprocessed foods had an overall poorer nutrient profile than that of nonultraprocessed, although they often contained less saturated fat, and they also contained more carbohydrates, mostly from low-quality sources with added sugars and low levels of dietary fiber and protein.

And despite a higher total folate content in ultraprocessed foods because of fortification, higher-level consumers took in less total folate owing to their lower consumption of whole foods.

The authors cautioned that in addition to poor nutrient profiles, processing itself may harm health by changing the physical structure and chemical composition of food, which could lead to elevated glycemic response and reduced satiety. Furthermore, recent research has linked food additives such as emulsifiers, stabilizers, and artificial sweeteners to adverse metabolomic effects and obesity risk. Pointing to the recent success of efforts to reduce consumption of sugary beverages, Zhang said, “We need to mobilize the same energy and level of commitment when it comes to other unhealthy ultraprocessed foods such as cakes, cookies, doughnuts, and brownies.”

The trends identified by the Tufts study “are concerning and potentially have major public health significance,” according to an accompanying JAMA editorial.

“Better dietary assessment methods are needed to document trends and understand the unique role of ultraprocessed foods to inform future evidence-based policy and dietary recommendations,” wrote Katie A. Meyer, ScD, and Lindsey Smith Taillie, PhD, of the Gillings School of Global Public Health at the University of North Carolina in Chapel Hill.

The editorialists share the authors’ view that “a conceptual advancement would be to consider the level and characteristics of processing as just one of multiple dimensions (including nutrients and food groups) used to classify foods as healthy or unhealthy.” They pointed out that the Pan American Health Organization already recommends targeting products that are ultraprocessed and high in concerning add-in nutrients.

This presents a challenge for national food consumption research “given that most large epidemiological studies rely on food frequency questionnaires that lack the information necessary to classify processing levels,” they wrote.

This study was supported by the National Institutes of Health and the São Paulo Research Foundation. Coauthor Dariush Mozaffarian, MD, a cardiologist at Tufts University, disclosed support from the Bill & Melinda Gates Foundation, the National Institutes of Health, and the Rockefeller Foundation as well as personal fees from several commercial companies. He has served on several scientific advisory boards and received royalties from UpToDate, all outside of the submitted work. Meyer reported a grant from choline manufacturer Balchem. Taillie reported funding from Bloomberg Philanthropies. Zhang had no disclosures. Katzow disclosed no competing interests.

This story originally appeared on MDedge.com, part of the Medscape Professional Network.