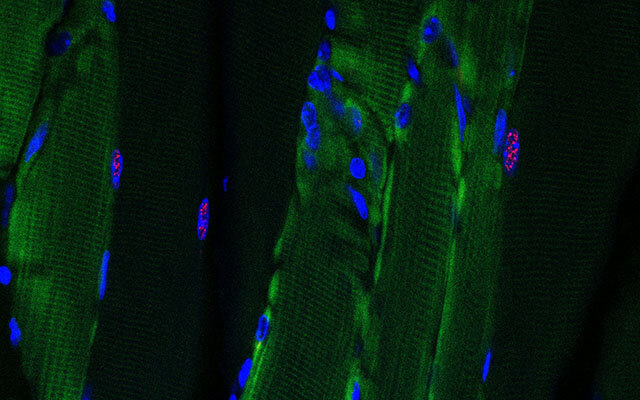 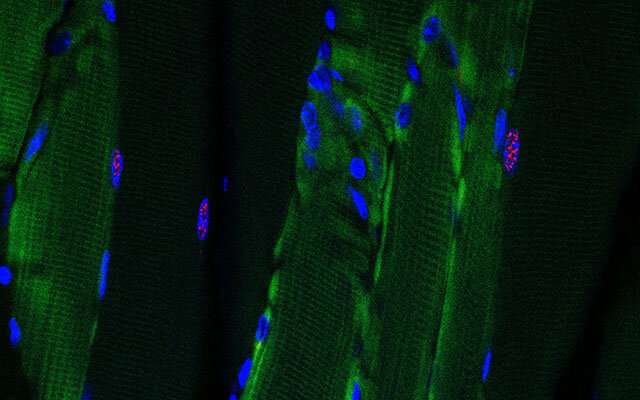 Myotonic dystrophy type I is the most common type of adult-onset muscular dystrophy. People with the condition inherit repeated DNA segments that lead to the toxic buildup of repetitive RNA, the messenger that carries a gene’s recipe to the cell’s protein-making machinery. As a result, people born with myotonic dystrophy experience progressive muscle wasting and weakness and a wide variety of other debilitating symptoms.

CRISPR-Cas9 is a technique increasingly used in efforts to correct the genetic (DNA) defects that cause a variety of diseases. A few years ago, University of California San Diego School of Medicine researchers redirected the technique to instead modify RNA in a method they call RNA-targeting Cas9 (RCas9).

In a new study, publishing September 14, 2020 in Nature Biomedical Engineering, the team demonstrates that one dose of RCas9 gene therapy can chew up toxic RNA and almost completely reverse symptoms in a mouse model of myotonic dystrophy.

“Many other severe neuromuscular diseases, such as Huntington’s and ALS, are also caused by similar RNA buildup,” said senior author Gene Yeo, Ph.D., professor of cellular and molecular medicine at UC San Diego School of Medicine. “There are no cures for these diseases.” Yeo led the study with collaborators at Locanabio, Inc. and the University of Florida.

Normally, CRISPR-Cas9 works by directing an enzyme called Cas9 to cut a specific target gene (DNA), thereby allowing researchers to inactivate or replace the gene. RCas9 works similarly, but Cas9 is guided to an RNA molecule instead of DNA.

In a 2016 study, Yeo’s team demonstrated that RCas9 worked by using it to track RNA in live cells. In a 2017 study in lab models and patient-derived cells, the researchers used RCas9 to eliminate 95 percent of the aberrant RNA linked to myotonic dystrophy type 1 and type 2, one type of ALS and Huntington’s disease.

The approach is a type of gene therapy. The team packaged RCas9 in a non-infectious virus, which is needed to deliver the RNA-chewing enzyme inside cells. They gave the mice a single dose of the therapy or a mock treatment.

RCas9 reduced aberrant RNA repeats by more than 50 percent, varying a bit depending on the tissue, and the treated myotonic dystrophy mice became essentially indistinguishable from healthy mice.

Initially, the team was worried that the RCas9 proteins, which are derived from bacteria, might cause an immune reaction in the mice and be rapidly cleared away. So they tried suppressing the mice’s immune systems briefly during treatment. As a result, they were surprised and pleased to discover that they prevented immune reaction and clearance, leaving the viral vehicle and its RCas9 cargo to persist, and get the job done. What’s more, they did not see signs of muscle damage. In contrast, they saw an increase in the activity of genes involved in new muscle formation.

“This opens up the floodgates to start testing RNA-targeting CRISPR-Cas9 as a potential approach to treat other human genetic diseases—there are at least 20 caused by buildup of repetitive RNAs,” Yeo said.

It remains to be seen if RCas9-based therapies will work in humans, or if they might cause deleterious side effects, such as eliciting an undesired immune reaction. Preclinical studies such as this one will help the team work out potential toxicities and evaluate long-term exposure.