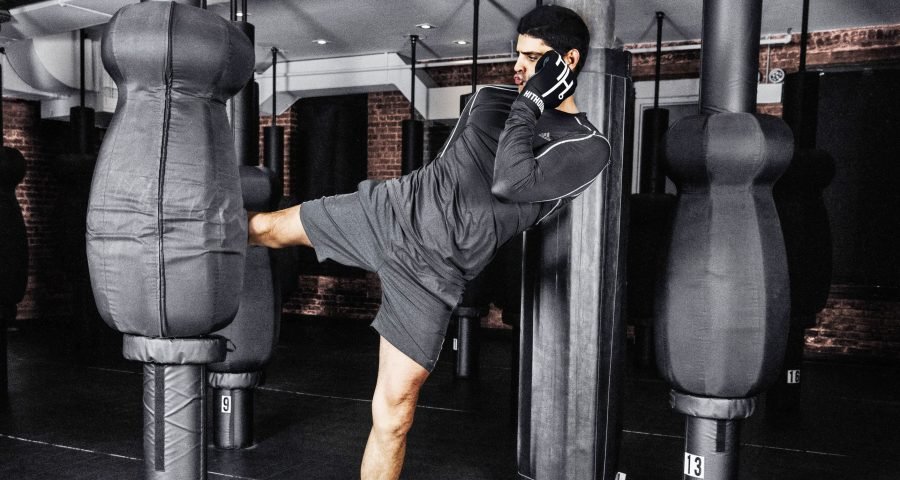 I’m 12 minutes into my first-ever Muay Thai class at Hit House in New York City when instructor Raquel Harris commands everyone to strike their bag with a rear kick, the Muay Thai money shot. You rotate your body and pivot on the ball of your front foot, and kick your opponent with a thwack. Thanks to my soccer background, my kick connects with a solid blast, but I’m left off-balance.

Harris calls for more kicks, and the entire 12-person class kicks, then resets, then does it again, like an Instagram Boomerang. I’m quickly learning the challenge of Muay Thai: Can you blend power, balance, and flexibility while using your leg muscles, the biggest in the body?

Kickboxing for fitness isn’t new (remember TaeBo?), but, powered by the rise of the UFC, it’s mainstream again. Hit House is part of a cadre of new spots like Throwdown NYC and iLoveKickboxing that are popularizing mixed-martial-arts training. In 2017, about 6.7 million people used cardio kickboxing to stay in shape, according to a new report, beating out boxing by more than 1.5 million.

It helps that there’s a mental aspect. “To many patients, I recommend exercise that channels aggression,” says Drew Ramsey, M.D., a clinical psychiatrist and MH mental health advisor. But pretending the bag is a person you hate is not the healthiest option, he says. Instead, frame the enemy emotionally and specifically: “The bag is your pain, your fear, your anxiety.”

Hit House, which opened last year, caters most explicitly to newbies. Tyler Scott, a 36-year-old amateur Muay Thai fighter, is the brains behind the bludgeoning. Trained in jujitsu and Muay Thai, he fought in the Bronx underground, and by 2011, he’d piled up a 5–1 record. He hung it up to start Hit House.

While he acknowledges his résumé can’t compete with those of elite UFC coaches, he set out to do something different. “There are top-shelf fighting gyms all over,” he says. “My wife and I wanted to create a beginners’ Muay Thai class centered around striking and bag work.”

Taking the Fight to the Bag

The morning and evening sessions are packed with a mix of men and women. Each class kicks off with calisthenics, jumping jacks, and pushups. Sweat already glazes my forehead as I learn the eight kicks and punches. All require rotation at my hips. Harris demos the moves, then I practice, strafing the heavy bag, dubbed Bishop and unique to HitHouse. Bishop is a hybrid bag, softer than a typical bag, shaped like a marshmallow human (or a svelte chess piece), and anchored to the ceiling and floor. Kicking it is exhausting, activating my glutes, hips, and quads. It’s a fresh spin on leg day.

I’m thinking about this as we transition into eight 3-minute rounds that make me repeat combos. By now, all the rotation has turned this into a serious core workout. Things get fierce in round four, when we try a switch rear kick, which has you changing stance before swiveling from your hips to launch a kick.

I’m relieved when Harris says we’ll do a round of core work. But it’s more rotation: crunches, bicycles, and X-ups (right leg to left shin and vice versa). My abs feel like they’re being wrung out.

Then it’s back to beating Bishop. I’m starting to get this. After the sixth round, which is mostly side-knees and elbows, we focus on kicks. We deliver three in rapid succession. Now I’m Jean-ClaudeVan Damme in Kickboxer, chopping down stress like JCVD chopped down a palm tree with his shin.

It’s awesome, unrestrained aggression—and that just may be Hit House’s secret sauce (and the reason the gym has 4.9 stars out of 5 on Class Pass). Even if you’re not super-fit or super-coordinated, you can still kick stress’s ass.

Start in a fighter’s stance: Feet shoulder-width apart, your dominant hand and foot behind you, shoulders square, hands up, and chin down.

Hop your back foot forward and your front foot back, shifting only at the hips. Drive both hips forward, rising onto the ball of your front foot. Pivot on it while swinging your back leg. Hit your target with your shin.

Subtly shift your weight onto your back heel. As you do that, drive your front knee up, using your hips to thrust forward, and extend your front foot. Hit the target with the ball of your foot and “push” it away.