They were pests to the farmer’s wife, according to the nursery rhyme.

But blind mice have led scientists to an ‘extremely valuable’ discovery of hundreds of new genes which could explain problems with people’s eyesight.

Studying the DNA of 300 of the rodents has flagged up 261 genes which have been linked to hereditary sight loss for the first time.

Researchers say because mice’s genes are so similar to humans’ their findings could lead to diagnosis and treatment of more genetic diseases. 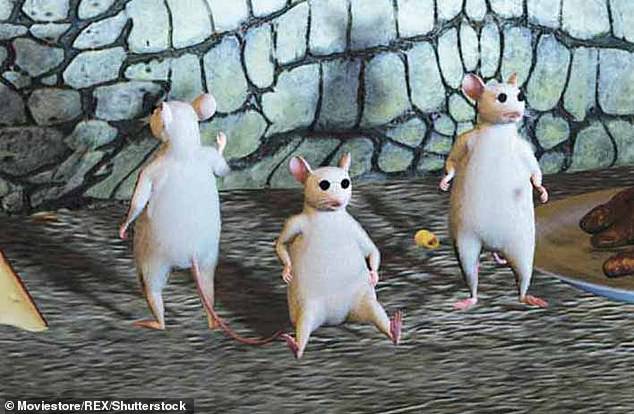 Scientists studied the DNA of blind mice (pictured, the three blind mice in the movie Shrek 2) in order to link hundreds of genes to vision loss for the first time – they hope the findings will translate to people’s genes and help medics identify new types of hereditary sight problems

Scientists at the University of California, Davis studied information from a data bank of mice’s genetic material.

They found 347 genes linked to vision or eye problems, with just 86 of them having been studied in the past.

Only around 50 to 75 per cent of hereditary eye diseases in humans can be explained with current science.

But the researchers believe these hundreds of new genes found in mice could be a key to explaining – and therefore being able to treat – the other 25 to 50 per cent.

‘This is extremely valuable for people with hereditary eye disease,’ said researcher Professor Ala Moshiri.

‘The whole ophthalmic community is going to start using these data.

‘In [cases of eye disease we can’t explain] we know the mutation is there but we don’t know where to look.

‘Now eye centers that do DNA sequencing can call back patients and screen them for these new genes.

‘We expect that more and more of these genetic diseases will be treatable.’

Two of the most common causes of vision loss in adults are glaucoma and age-related macular degeneration, both of which are thought to be inheritable.

And more than 60 per cent of eye problems at birth are ones inherited from the baby’s parents.

Scientists are moving closer to understanding all genetic causes of blindness thanks to data from the International Mouse Phenotyping Consortium.

The IMPC is a project trying to work out what every single gene in a mouse is responsible for, with the aim of translating it to humans.

Scientists do this by isolating and deactivating a single gene at a time and observing what effect it has on the mice.

This has so far been done more than 7,000 times and has revealed genetic causes of death, deafness and even bad breath.

Researchers are now working alongside eye care centres in Texas and Iowa in order to compare the mice’s genes to those of opthamologists’ patients.

The study was published in the journal Communications Biology.

Glaucoma is a condition which can affect sight, usually due to build up of pressure within the eye.

It often affects both eyes, usually to varying degrees. One eye may develop glaucoma quicker than the other.

The eyeball contains a fluid called aqueous humour which is constantly produced by the eye, with any excess drained though tubes.

Glaucoma develops when the fluid cannot drain properly and pressure builds up, known as the intraocular pressure.

This can damage the optic nerve (which connects the eye to the brain) and the nerve fibres from the retina (the light-sensitive nerve tissue that lines the back of the eye).

In England and Wales, it’s estimated more than 500,000 people have glaucoma but many more people may not know they have the condition. There are 60 million sufferers across the world.

Glaucoma can be treated with eye drops, laser treatment or surgery. But early diagnosis is important because any damage to the eyes cannot be reversed. Treatment aims to control the condition and minimise future damage.

If left untreated, glaucoma can cause visual impairment. But if it’s diagnosed and treated early enough, further damage to vision can be prevented.