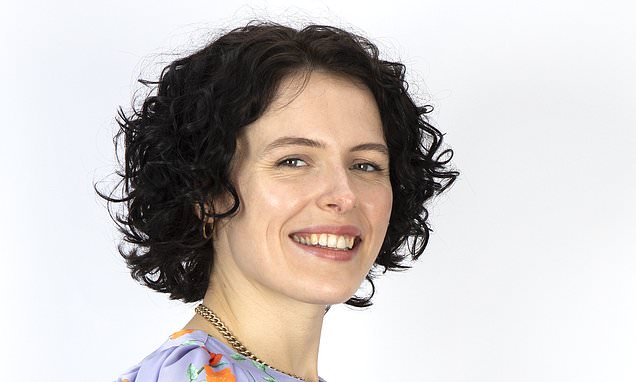 The headache from hell: If you thought yours was unbearable, spare a thought for Emma, who has had head pain for SIX YEARS. So could the way she finally tackled it change your life, too?

Emma Allenby was studying for A-levels when she developed a headache that just wouldn’t go away.

Initially, she blamed the 30-second bursts of intense pain flashing through the top of her head — something she had never experienced before — on revision-related stress.

But then one morning, three weeks after the first bout of pain, it became a debilitating, chronic headache.

‘The pain was so bad it woke me up,’ recalls Emma, now 24, from Loughborough, Leics, who works in sales and marketing. ‘It had moved from 30-second flashes of intense pain to constant pain — and it hasn’t gone away since.’

Six years on, Emma is still suffering, and despite numerous treatments, tests and investigations, no one can yet explain what is causing her headache.

‘I was 18 when it began and everything came to a halt,’ she says. ‘Constant debilitating pain interfered with every aspect of my life.

‘I didn’t take my A-levels, I stopped going out and I was miserable. I took it out on my parents, though I know they understood why.

‘I tried the usual treatments, including paracetamol and ibuprofen. And when they didn’t work I was prescribed stronger painkillers, such as co-codamol, but nothing touched the pain.

‘After 72 hours without sleep from the pain, I was catatonic. Mum took me back to the GP and I passed out after a blood test, going face down on the floor and smashing a tooth. I came round to a massive surge of pain in my head.

‘My tooth got fixed, but the headache continued as it is now; constant, seven-out-of-ten pain which doesn’t change with environment or food.’

Emma’s chronic or long-term headache is not too unusual, according to Dr Joe Guadagno, a consultant neurologist at Newcastle upon Tyne NHS Foundation Trust.

‘Permanent headaches are surprisingly common, both recurring and constant, and are often without diagnosis, which makes treating them challenging — especially since the constant use of painkillers can have side-effects such as overuse actually perpetuating the pain.’

The National Institute for Health and Care Excellence (NICE) said earlier this month that paracetamol and ibuprofen should not be prescribed for chronic pain because they can potentially ‘cause more harm than good’. 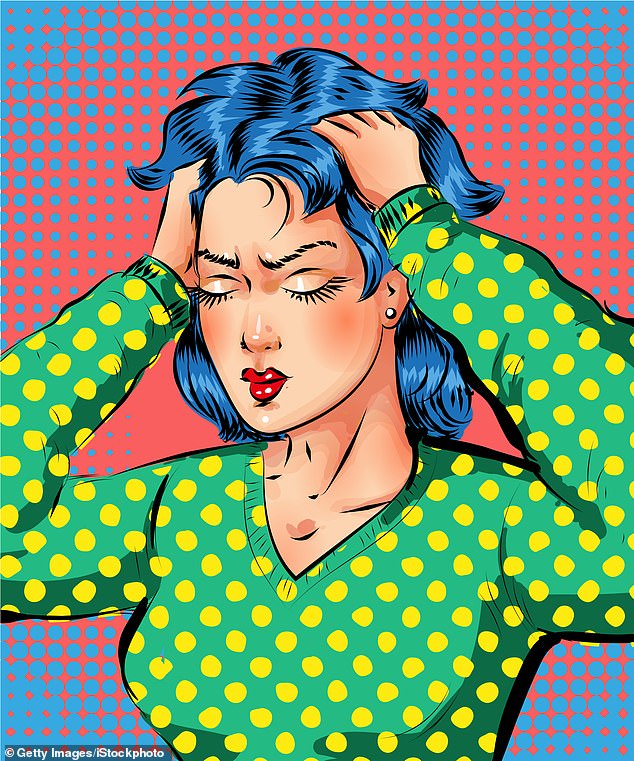 Emma continued trying every possible treatment, including acupuncture, to try to relieve the pain, to no avail [File photo]

Instead, it recommends exercise, therapy, acupuncture and antidepressants for the estimated half of the population who are affected by chronic pain — that is, pain that lasts for three to six months or more.

After painkillers failed to alleviate Emma’s headache, she was sent for MRI and brain scans to see if there was a more sinister cause.

Dr Guadagno recommends anyone who has a progressive or persistent headache to seek medical attention to rule out serious underlying health problems.

‘New headaches in anyone over 50, and sudden-onset headaches where the pain reaches maximum intensity within five minutes and is associated with symptoms such as sudden or progressively weak arms and legs, fever or confusion, should be checked out,’ he says.

‘There is no specific “brain tumour” headache, but at any age, any progressive or persistent headache, or headache that has changed dramatically over time, usually warrants a brain scan.’

When Emma’s scans came back clear, there was a sigh of relief — but doctors then suggested her headaches might be psychological.

‘This left me questioning everything and whether my body was playing tricks on me,’ says Emma. ‘One of my biggest fears was that I wouldn’t be believed.’

Her parents, both pharmaceutical research scientists, were determined to get to the bottom of the problem and had Emma referred to a private neurologist in Birmingham.

‘We tried less widely known medicines and methods in an attempt to provide relief quickly so I could sit my A-levels, go to university and get back to a normal life,’ recalls Emma.

‘I was prescribed steroids to reduce inflammation, sodium valproate — which is usually used to treat epilepsy and bipolar disorder, but can occasionally be used to prevent migraine headaches — as well as sleeping tablets, as exhaustion meant I didn’t know who or where I was.

‘But finally the consultant admitted defeat, with no idea what was causing my headaches. I was just left to live with the problem.’

By 2015, a year after the headache started, nothing had changed. A blood test with an endocrinologist — a hormone specialist — revealed that Emma’s levels of the stress hormone cortisol, which can be a marker for pain, were ‘through the roof’, proving to doctors that her intense pain was real.

Emma continued trying every possible treatment, including acupuncture, to try to relieve the pain, to no avail.

‘It left me feeling hopeless,’ she says. Unable to sit her A-levels or continue with normal life, she could only watch as friends left home, headed for university and started new jobs — her younger brother Ben, now 22, among them.

‘There was an underlying jealousy that I don’t like to admit,’ she says. ‘Being an older sibling, I always thought I would experience those things first, but instead I spent most of my days at home on the sofa, unable to move.

‘The lack of sleep was almost harder to conquer than the headaches. Before, I’d been a social butterfly, but now I felt like a burden, going out for only an hour before I was exhausted.

‘I’d hear myself sounding fed up and miserable and think: “What happened to the bubbly, vibrant girl I used to be?” ’

A breakthrough came four years ago when Emma was referred for cognitive behavioural therapy (CBT), a talking therapy to help manage problems by changing the way you think and behave, which is recommended by NICE for chronic pain.

While she wasn’t able to offer Emma a ‘cure’, Dr Beverley David, a clinical psychologist, helped her to find coping strategies and deal with the depression that was exacerbating the pain.

‘Beverley helped me realise I could find a way through this,’ says Emma. ‘I was sad and angry, grieving for a life I’d lost but also so fed up with myself.’

Veg patch medicine: The health wonders that lie in your larder

This week: Onions for hay fever and allergies 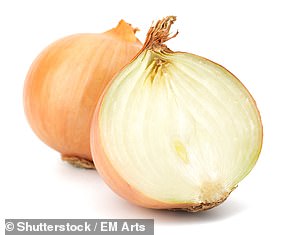 Onions are rich in quercetin, a plant chemical that has been shown in laboratory and animal studies to dampen the production of histamine

Onions are rich in quercetin, a plant chemical that has been shown in laboratory and animal studies to dampen the production of histamine — the chemical that produces allergy symptoms such as itchy eyes and a runny nose.

A couple of small human studies, including one in the journal Allergology International in 2009, showed that when people with hay fever were given quercetin in supplement form (100-300mg a day) they had reduced eye and nasal symptoms.

A medium onion contains 22-52mg of quercetin. While more research is required, eating more onions can’t harm you if you have seasonal allergies.

Sautéeing and baking don’t reduce quercetin, but boiling leaches it into the surrounding water.

Possibly the biggest step was accepting that her headache might never go away and learning to live well with it.

‘Beverley taught me to change the way I think and behave, and tricks to reset my body clock which helped me sleep better,’ says Emma.

‘Sleep deprivation spoils everything. I hated what I’d become and felt I was letting people down. She showed me that I could let this illness strengthen my character.’

After a year under Dr David’s care, Emma decided she wanted to train to be a counsellor (while she continues to work in sales and marketing).

‘I wanted to help make a difference to other people, listening and believing anyone who has been judged over the years for battling with something that no one can see or understand,’ says Emma.

Dr David, who now works in Ontario, Canada, says: ‘Working with unexplained physical symptoms can bring extra challenges. Our understanding around mental health is increasing, helping to better support holistic health. Cognitive behavioural therapy helps to reveal links between symptoms, worries and feelings and how to manage them.’

Despite six years of constant pain, Emma’s life is now moving on positively — she is thoroughly enjoying life with her boyfriend, Elliot, 24, a project manager for a bespoke kitchen company whom she met through a dating app, and with her family and friends.

‘If I woke up tomorrow and the headache was gone, I don’t know how long it would take me to believe it,’ she says.

‘But I can’t put my life on hold waiting for that to happen. All the good things in my life now are more important to me than a sore head, even one that has lasted for six years.

‘I couldn’t be happier with how far I’ve come, but it certainly hasn’t been easy. Living with chronic pain isn’t the end — it’s what you make of it.’