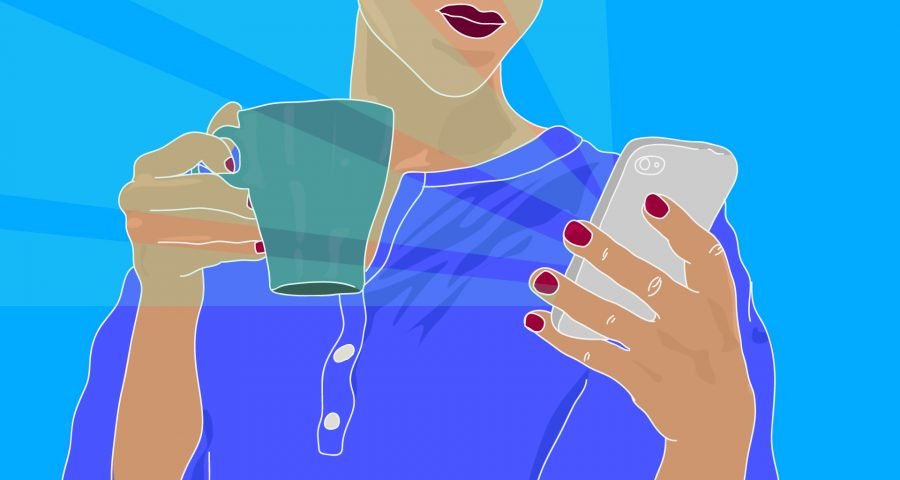 The internet has a keen ear, not unlike like that of a concerned friend or some empathic, solicitous stranger in a subway car. That’s why women regularly turn to Google to answer life’s existential questions. Gillian Brockell, for one, sought answers online quite often during her pregnancy.

But in the weeks following the birth of her stillborn son, Brockell shared an open letter to tech companies making an oft-neglected point about digital ad algorithms. While she and her husband were grieving their loss, Brockell was still served ads for Pea in the Pod and Motherhood Maternity — relentlessly reminded of the baby she was preparing to have but didn’t.

Like Brockell, women have experienced an array of triggering ads. Here, four women divulge the details of their own harrowing accounts that caused them to relive a painful trauma thanks to targeted advertising.

Reminded of the loss of her father

“My dad passed away two years ago, and I received all sorts of weird ads, but what I remember the most were ads for Sheryl Sandberg’s Option B book, which came out around that time,” Anne Hilb tells SheKnows. “I was in a state of grief and mourning and needed some time to feel that way, but here was this achiever who had taken her pain and inspired others with it.”

Sandberg’s Option B: Facing Adversity, Building Resilience, and Finding Joy tells the story of losing her husband, SurveyMonkey CEO Dave Goldberg, on May 1, 2015. It serves as a primer for those who are bereaved with tips to help them recover and find happiness.

“I think when tragedy occurs, it presents a choice,” Sandberg writes. “You can give in to the void, the emptiness that fills your heart, your lungs, constricts your ability to think or even breathe. Or you can try to find meaning.”

For Hilb, finding meaning felt infeasible at the time.

“[Sandberg] was vulnerable and I was withdrawn,” she explains. “I guess I wanted to come to the resource on my own when I was ready and not feel constantly bombarded.”

Reminded of her unexpected pregnancy

“After taking five different pregnancy tests of different brands, I had to come to terms with the fact that I was actually pregnant,” Wendy P., 26, tells SheKnows. “I started googling about options [to terminate the pregnancy], and walked around for a week distraught, confused, nervous… I couldn’t eat, I couldn’t think, and I definitely couldn’t sleep because laying on my chest was a sore, painful reminder that this was more than a few pink plus signs on some plastic — this was real.”

But one morning, Wendy woke up bleeding “like three of [her] worst periods ever combined.” She went to the clinic anyway to find no signs of pregnancy on the ultrasound and a negative blood test. She was rushed out, only to go home and take three more pregnancy tests, all of which were positive.

She later learned that she’d had a “chemical pregnancy,” a pregnancy loss that occurs shortly after implantation, before ultrasounds can detect a fetus but not too early for a pregnancy test to detect human chorionic gonadotropin.

“This was an extremely confusing and upsetting experience — was I pregnant or wasn’t I?” she says. “I felt guilty feeling relieved that it was over either way. Except that it wasn’t over. I started seeing Planned Parenthood and other pregnancy- and Plan B-related ads on Facebook.”

Wendy never received medical confirmation of her pregnancy and was left largely in the dark about what her body was going through. As such, she says the ads were constant reminders of the disquieting confusion. She also says that the ads remind her of a decision that in hindsight, she thinks she would have regretted.

Reminded of the struggle with her sexuality

“I once had a long conversation with my ex over Google Hangouts about our hyper-religious families and queer sexualities; her parents wanted her to go to conversion therapy,” Heidi Caroline tells SheKnows. “For the next month, Facebook routinely showed me ads for conversion therapy.”

Heidi had never come out to her late father, who was “extremely traditional and struggled to accept the LGBQT community,” even though he ultimately expressed a “love-the-sinner-not-the-sin” attitude, she says. She did, however, open up to her mother, who she says has been super-supportive though “awkward,” and her sister, a priest who hung a gay pride flag in her living room. Her brother, she presumes, knows of her sexuality too.

While Heidi’s family is overall accepting, she says that the ads for conversion therapy were nonetheless unsettling.

“They were phrased to be hopeful, like a ‘You can heal from this!’ kind of vibe,” she says. “I selected ‘I don’t want to see this ad’ pretty quickly, and I didn’t see them again. But I was surprised to see them in the first place… Conversion therapy is not something that’s ever been pushed on me, but a more vulnerable population might have an adverse reaction to them.”

Reminded of her battle with cancer

“I was diagnosed with cervical cancer a month before my 35th birthday — I received a radical hysterectomy with lymph node removal, chemotherapy and radiation,” Kristen Hovet tells SheKnows. “To this day, I consistently get ads for feminine hygiene products and baby products — including YouTube ads that I cannot skip — even though I have a 17-year-old son and can no longer have children.”

Due to the loss of her organs and radiation, Hovet no longer experiences periods; she’s on hormone replacement therapy.

“Ads for pads, tampons and baby products make me sad — having to deal with that loss abruptly and at a young age was hard for me,” she says. “These ads are a constant reminder about what happened, and I wish the algorithms were ‘smarter’ and picked up on the fact that I’m a gynecologic cancer survivor who cannot have more children or experience periods ever again.”