A hug is like a boomerang – you get it back right away. So said Bil Keane, the American cartoonist.

But a new study suggests women get much more back from cuddling than men, receiving a bigger stress-relieving boost, which may help explain male reticence around embracing a partner. 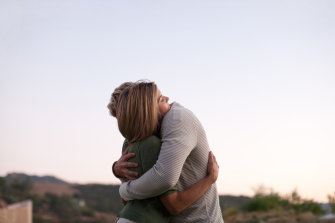 The power of touch is known to be important for humans, signalling safety and trust and releasing the bonding hormone oxytocin.Credit:iStock

Researchers from Ruhr University Bochum, Germany, analysed 76 people in romantic relationships and measured levels of stress hormone cortisol when they hugged briefly ahead of a test which raised stress levels.

They found women who hugged their partners had lower cortisol levels than women who did not.

This suggested that for women, even a brief cuddle with a romantic partner before a stressful situation could help relieve stress.

There was no change for men, suggesting hugs do little to relieve their anxiety.

Writing in the journal Plos One, the researchers said: “We found a cortisol-buffering effect of embraces between romantic partners following a stress induction procedure. The effect was specific to women.

“This finding could have implications for stress reduction in everyday situations that often induce stress like exams, oral presentations or job interviews.”

They added: “As a woman, hugging your romantic partner can prevent the acute stress response of your body.”

The power of touch is known to be important for humans, signalling safety and trust and releasing the bonding hormone oxytocin. Psychologists use the term “skin hunger” for when people lack the intimacy of close contact.

“This finding could have implications for stress reduction in everyday situations that often induce stress like exams, oral presentations or job interviews.”

However, few studies have investigated these effects in men, nor have they explored the effects of brief embraces on their own.

In the new study, participants underwent a stress-inducing test. They were kept one hand in an ice-water bath for three minutes while being observed and holding eye contact with a camera.

Before the test, half of the couples were told to embrace, and the others did not embrace.

The researchers suggested that further study could investigate whether the benefit extends to embraces with platonic friends.

Hugging was effectively banned in the western world during COVID restrictions, with countries reduced to bumping elbows to show affection.

The authors also called for research into related effects of the pandemic, including whether social restrictions that reduced social touch may be associated with observed increases in stress and depression during the pandemic.