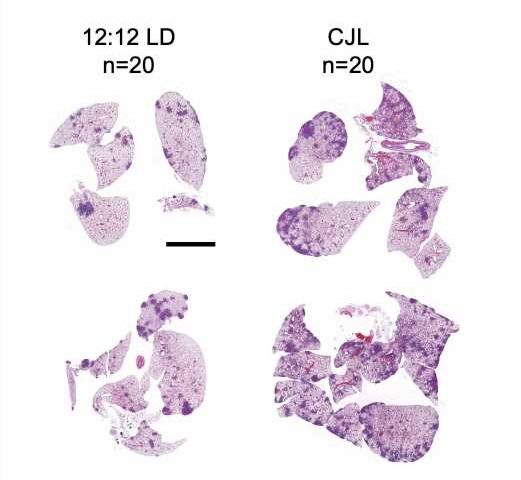 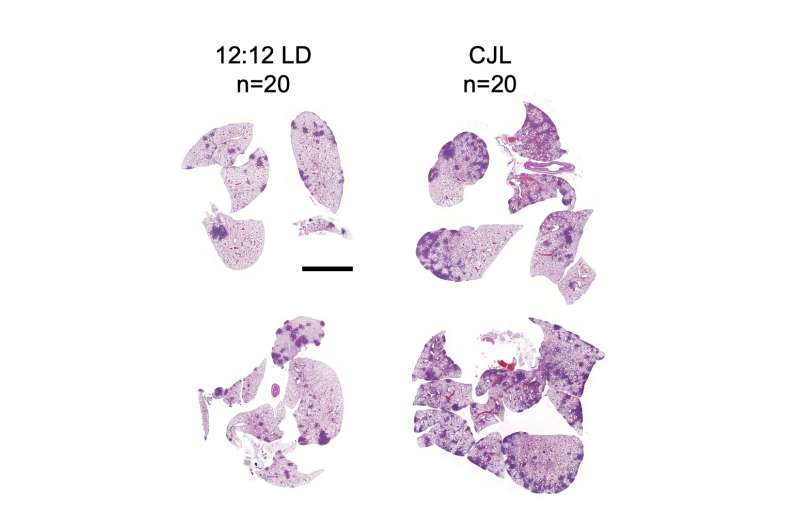 Disruptions in circadian rhythm—the ways that our bodies change in response to the 24-hour light and dark cycle—have been linked to many different diseases, including cancer. The connection between the two has been poorly understood, even though shift workers and others with irregular schedules experience these disruptions regularly. But a new discovery from Scripps Research is helping answer what may be behind this correlation.

Published in Science Advances on September 28, 2022, the findings highlight that chronic circadian disruption significantly increased lung cancer growth in animal models. By identifying the genes implicated, the researchers are illuminating the mysterious link between our sleeping patterns and disease, which could help inform everything from developing more targeted cancer treatments to better monitoring high-risk groups.

“There has always been a lot of evidence that shift workers and others with disrupted sleep schedules have higher rates of cancer, and our mission for this study was to figure out why,” says senior author Katja Lamia, Ph.D., associate professor in the Department of Molecular Medicine.

To answer this question, the scientists used a mouse model with expressed KRAS—the most commonly mutated gene in lung cancer. Half of the mice were housed in a “normal” light cycle, meaning 12 hours of light and 12 hours of darkness. The other half were housed in a light cycle meant to resemble that of shift workers’, where the light hours were moved earlier by eight hours every two or three days.

The findings aligned with what the researchers initially thought: mice that were exposed to the irregular, shifting light patterns had an increased tumor burden of 68%.

But when they used RNA sequencing to determine the different genes involved in the cancer growth, they were surprised that a collection in the heat shock factor 1 (HSF1) family of proteins was the main culprit.

“This is not the mechanism we were expecting to find here. HSF1 has been shown to increase rates of tumor formation in several different models of cancer, but it has never been linked to circadian disruption before,” Lamia says.

HSF1 genes are responsible for making sure proteins are still made correctly even when a cell is under extreme stress—in this case, when it experiences changes in temperature. The team suspects that HSF1 activity is increased in response to circadian disruption because changes in our sleep cycles disturb the daily rhythms of our bodies’ temperature.

“Normally, our body temperature changes by one or two degrees while we’re sleeping. If shift workers don’t experience that normal drop, it could interfere with how the HSF1 pathway normally operates—and ultimately lead to more dysregulation in the body,” Lamia adds. She believes cancer cells may exploit the HSF1 pathway to their own benefit and create mutant, misfolded proteins, but says more research is needed in this area.

These findings help shape not only our understanding of how circadian rhythms impact cancer, but also potentially a preventative way of protecting more vulnerable groups who are at risk. By non-invasive monitoring of body temperature, it may be possible to optimize shift workers’ schedules and even halt this type of dysregulation that can lead to cancer.

With these discoveries in hand, the scientists are now evaluating if HSF1 signaling is required to increase tumor burden and isn’t solely just a correlation.

“Now that we know there’s a molecular link between HSF1, circadian disruption and tumor growth, it’s our job to determine how they’re all connected,” Lamia says.