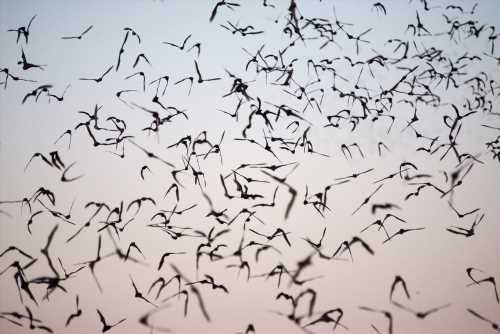 Studies have not yet assessed the impact of social, ecological, and biological factors and changes in the host population that generate conditions facilitating the transmission of infectious pathogens, such as severe acute respiratory syndrome coronavirus 2 (SARS-CoV-2). For instance, bat population structure and reproductive cycles impact the transmission of RNA viruses, including SARS-CoV-2. A detailed evaluation of all these factors could substantially expand the understanding of host-pathogen interactions and help assess the zoonotic spill-over potential of these viruses to other hosts.

Although many studies have reported viruses, bacteria, and blood parasites in bats, studies have not yet investigated the role of factors associated with the bat colonies (e.g., occupation length) and the simultaneous circulation of multiple infectious pathogens therein.

In the present study, researchers collected 3422 fresh feces samples from two maternity colonies of Reunion free-tailed bats (RFTBs), a molossid species endemic to Reunion Island, during 64 sampling sessions. Since their reproductive cycles are highly synchronized, the researchers hypothesized that the viral shedding patterns of bats are also synchronized across birthing seasons. However, there might be differences between viral families.

Further, the researchers estimated the number of co-infected bats and tested whether the detection of a viral family in bats was associated with the presence of another virus family using three generalized linear mixed models (GLMMs). Likewise, they used four GLMMs to explore the effect of the colony itself. The study analyses included a season of parturition and sample collection dates as random factors.

The researchers visually monitored the age structure and parturition timing of bats in the cave colony and identified adults, newborns, and juveniles based on fur color (bat morphology). However, the same was not possible in the building-based bat maternity colony. The team monitored the cave colony between October 2016 to March 2020 (four consecutive birthing seasons) and the building colony between November 2017 and October 2020 (three birthing seasons).

The first bat maternal colony was a 30m3 natural cave on the West coast of Reunion island (cave). It harbored maximum pregnant bats during the birthing season from October to June, and their population reached about 40,000 to 50,000 before parturition began in mid-December. While adult bats had brown fur, newborns had nude pink skin, and juveniles had dark grey fur. The second bat maternity colony was a ~ 5m3 building that housed up to 1,200 flying bats. This colony had adult bats all year long, but newborns were present in mid-December and juveniles between January and May.

For CoVs and to a lesser extent for PMVs, bats exhibited a similar shedding pattern despite differences between colonies, notably population size and occupation length. Temporal variations were likely associated with the synchrony of reproductive cycles and the parturition of bats. The authors also detected some bats co-infected with CoVs and PMVs, with co-infections being more common in PMVs and CoVs than AstVs. The study results could not evidence a clear pattern associated with variation in the population age structure and colony type for AstVs.

Conversely, the authors noticed marked differences in the prevalence of bats shedding PMVs and CoVs between June and October. While they detected PMVs every year in the building, CoVs were undetectable. Further, they observed repeated shedding pulses for PMVs, but those were less pronounced for CoVs. Intriguingly, the shedding pattern for CoVs was highly repeatable between birthing seasons and also synchronized between maternal bat colonies. Perhaps not the population size but the age structure of RFTBs drove CoV epidemiological cycles. Future studies should elucidate the mechanisms governing the maintenance of viral transmission in bat populations for PMVs and CoVs.

The current study remarkably investigated the effect of population size, occupation length, and the age structure of molossid bat maternity colonies on virus shedding. However, a global assessment is needed to explore spill-over risk associated with prominent shedding pulses in tropical bat populations. Such studies would better assess the drivers involved in viral transmission dynamics in bats, beyond host-related factors, by investigating their interactions with the environment and other infectious pathogens.

Neha is a digital marketing professional based in Gurugram, India. She has a Master’s degree from the University of Rajasthan with a specialization in Biotechnology in 2008. She has experience in pre-clinical research as part of her research project in The Department of Toxicology at the prestigious Central Drug Research Institute (CDRI), Lucknow, India. She also holds a certification in C++ programming.