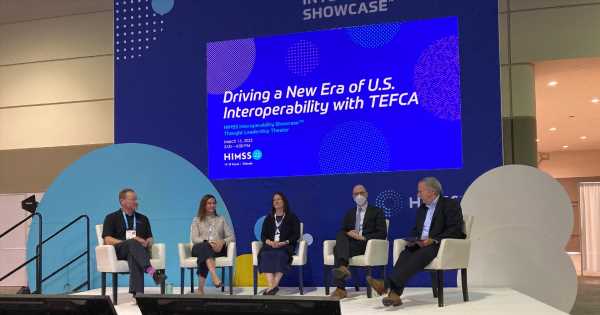 “Healthcare is very local,” said Paul Wilder, executive director of the CommonWell Health Alliance, during a HIMSS22 panel with other interoperability leaders Tuesday. “Ninety-seven percent of the data about you is in your local home. Fantastic.

“What about the 3%?” he continued. “Sometimes that 3% really matters. Sometimes it really, really does.”

As outlined in the common agreement, IAS is defined as services any Qualified Health Information Network (QHIN), participant or sub-participant provide to an individual to satisfy their request to access, inspect or obtain a copy of their information.

The idea, explained Mariann Yeager, CEO of the recognized coordinating entity Sequoia Project, is that an individual’s gateway to participating in TEFCA would be using an app or platform of their choice to connect to a QHIN – or a QHIN could offer its own app for the same purpose.

“That would give the individual, really, the same connectivity that exists today for healthcare providers and other actors,” she said.

“I think it’s really exciting what kind of individual access services will come out of this, because it’s an area that needs more investment and focus,” said Lisa Bari, CEO of Civitas Networks for Health.

“It’s one thing to respond to a specific, one-off request,” she continued. “It’s another thing to have individual access services part of what anybody can access.

“I’m interested to see how that develops, and I think that will actually help us take a significant step forward, maybe spill over – in a positive sense – to the HIE space more broadly, in advancing individual access services more broadly,” she said.

“I think that’s a really important piece that’s been missing,” she said.

Wilder noted the role IAS can play in ensuring accuracy by drawing on his own story about an HPV vaccine appearing in his patient record after an appointment at which he had received no such thing.

“I don’t know, 20 years from now, if I’ll have some condition whose unique therapy is contraindicated against HPV vaccination,” he pointed out.

In other words, errors may seem small, but they can be significant down the line – and if patients can spot them, they can ask for fixes.

“That is the evolution we can imagine with IAS, where you can see actual data provenance and the ability to correct the behavior,” said Bari.

John Rancourt, director of the Interoperability Division at the ONC Office of Policy, said that this exchange purpose presents what he called “a tremendous business opportunity.”

“What we’re talking about is a one-stop shop to get all of your data in one place,” he said. “[That’s] an enormous sea change for what could be possible for consumers.

“And we’re really excited about the technology developer world looking at that and saying, ‘Wow, I could do a lot for consumers with that,'” he said.