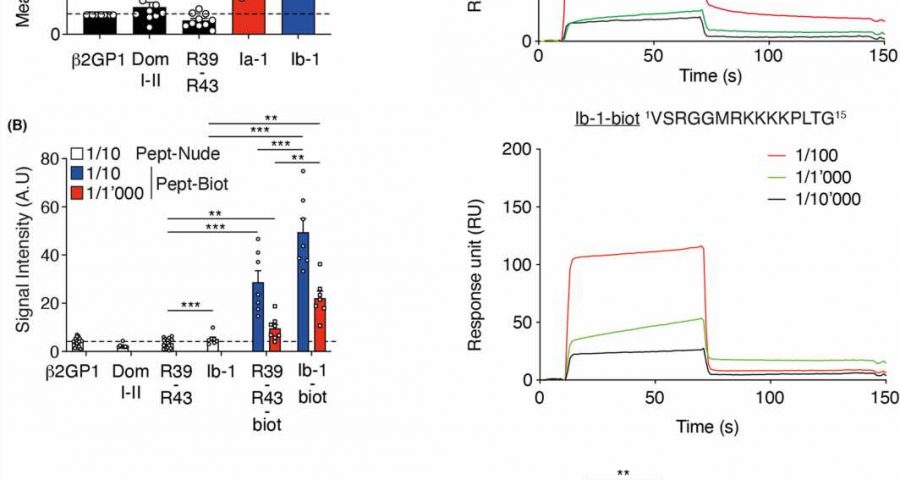 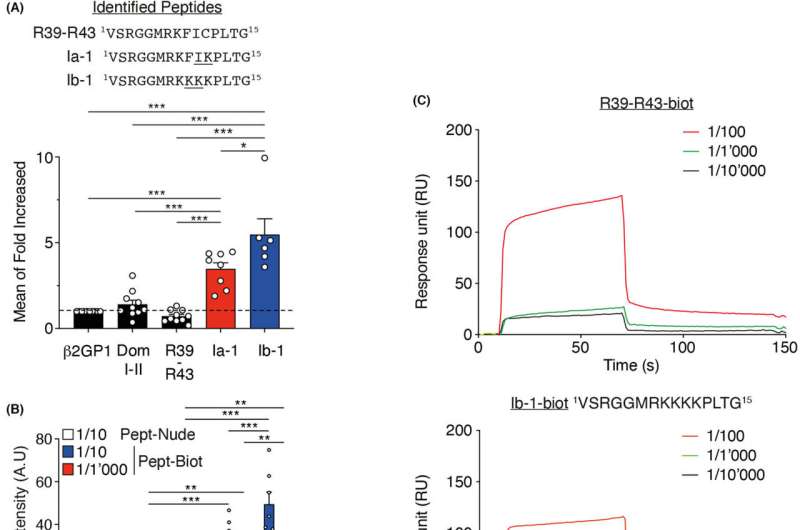 The Geneva University Hospitals (HUG), the University of Geneva (UNIGE) and their spin-off Endotelix have created a possible target molecule for the antibodies responsible for antiphospholipid syndrome. This discovery will enable a new screening test to be developed.

This auto-immune syndrome leads to the thromboses responsible for strokes and heart attacks. It has a serious impact on pregnant women, and can cause the death of their fetuses. The limited reliability of the current screening tests means that diagnostics cannot be performed before the first clinical signs appear. The new approach on the part of the HUGs and Endotelix increases the likelihood of the syndrome being detected from 40% to 85%, and finally opens up the door to screening.

Antiphospholipid syndrome (APS) is an auto-immune disease that can cause miscarriages or the death of the fetus. Antibodies turn against certain proteins (phospholipids, fatty substances that are essential for the organism’s survival) located on the surface of cells or circulating in the blood. These antibodies are called antiphospholipids.

While one study estimates that the antiphospholipids are responsible for an APS in 50 to 100 people out of 100,000, experts put the prevalence at 1 to 5% of the global population. For every man affected, four women are affected. This auto-immunity creates clots that are responsible for thromboses and can disrupt the pregnancy. At least 15% of recurring miscarriages are due to a case of APS. APS is now recognized as the most easily avoidable cause of miscarriages.

“This syndrome is also very problematic prior to the pregnancy for women who desire contraception. The cocktail of the APS and the hormonal pill causes infertility in 90% of cases within ten years,” warns François Mach, head doctor at the HUGs’ Cardiology Department, professor in the Department of Medicine at the UNIGE’s Medicine Faculty and co-author of the study.

While indirect treatments exist (chronic taking of anticoagulants), a reliable screening test would take effect before any dramatic consequences occur.

A quick and reliable test

The current tests have only 40% sensitivity for antiphospholipids, “which amounts to a coin-toss,” notes Karim Brandt, a former member of the scientific staff at the UNIGE’s Medicine Faculty and director of Science at Endotelix, who is responsible for the study. “That’s why the tests currently need to be correlated with clinical facts in order for an accurate diagnosis of APS to be made,” he adds. It’s a problematic situation given the seriousness of the clinical symptoms.

His team managed to develop a new test that is a hundred times finer, making the sensitivity rise to 85%. This level of sensitivity is sufficient to be able to offer a rapid test, like the antigen tests for COVID-19. It is mainly aimed at screening for women wanting a pregnancy or hormonal contraception, and will make it possible to prescribe treatments or appropriate care paths.

We still don’t have a good understanding of the origins of APS, aside from knowing that, for unknown reasons, antiphospholipids are present in the blood. Immunologists also know one of its targets: a circulating glycoprotein known as Beta2GP1.

The strategy used by Karim Brandt’s team to develop this diagnostic test was to identify, as specifically as possible, the region of the Beta2GP1 that is targeted by the antiphospholipids. Their idea was to imitate the properties of this region by creating a fictitious molecule that was as similar as possible to the antiphospholipids, i.e., the quest for the perfect target for these antibodies.

A synthetic antibody directed against the Beta-2GP1 was then created in the laboratory, thanks to this molecule. Allied to the ELISA biochemical analysis technique, it allows for a quantitative dosage and a very useful standardization of measures, synonymous with a high degree of reliability.

A study that will be of use for treatments

A test for research is already available and a clinical study in humans is in progress. If it succeeds, the expectation is that it will be put on the market in the near future. A rapid screening kit is currently being designed, moreover, with the partners at the National Center for Scientific Research (CNRS) in Lyon.

“Since the sequence of amino acids has a high capacity for interaction with antiphospholipids, it could also serve as a direct inhibitor via monthly or bimonthly injections in the guise of treatment,” Karim Brandt concludes.

The related research is published in Research and Practice in Thrombosis and Haemostasis and Current Rheumatology Reports.

More information:
Marc Moghbel et al, Epitope of antiphospholipid antibodies retrieved from peptide microarray based on R39‐R43 of β2‐glycoprotein I, Research and Practice in Thrombosis and Haemostasis (2022). DOI: 10.1002/rth2.12828