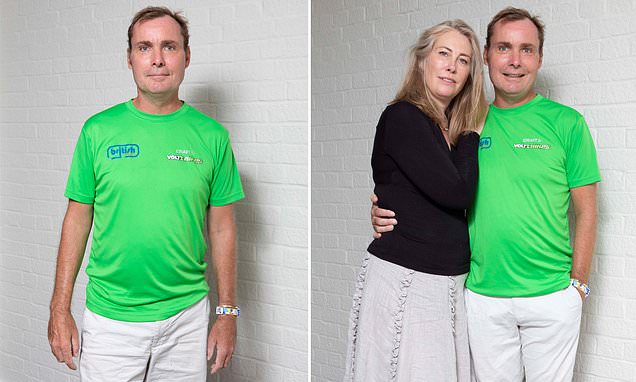 Super-fit Simon was struck by a fatal brain disease at just 52. And his most inspiring message? In the end, all that matters is the people you love…

At 52, Simon Brennan was in near-perfect physical condition. He’d run the London Marathon twice, and last summer prepared for an Iron Man race in Norway by ‘warming up’ with a 70k triathlon. He cycled, played tennis and trained at a boot camp three times a week.

But in October last year, Simon, a derivatives broker in the City, noticed an almost imperceptible slur in his speech: his wife Sophia, 51, says she couldn’t hear it, but it was obvious to him. ‘It felt extremely weird,’ he says. ‘I couldn’t get words out in the way I wanted. I thought I sounded like an ageing radio DJ.’

Over Christmas, he’d become anxious and irritable. ‘Small things, like the kids (Freddie, 25, Orla, 23, and Juno, 18) leaving their shoes everywhere would send him over the edge,’ says Sophia.

On January 2 this year, he walked into the job he loved and calmly announced that he didn’t want to do it any more. 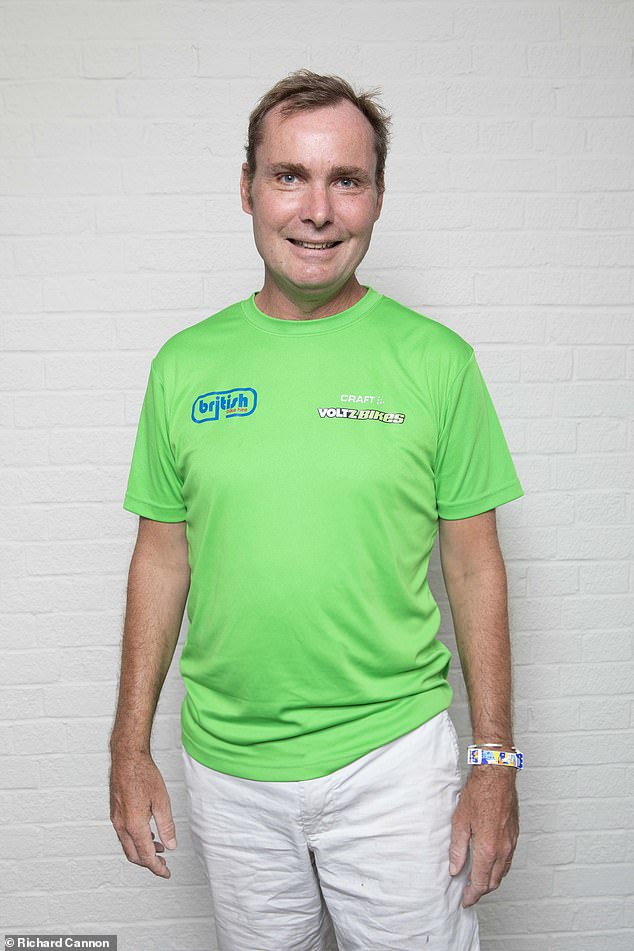 Unexpected medical condition: Simon Brennan, from North London, was diagnosed with motor neurone disease, last year – and is already suffering with its onset

‘I found myself having something like an out-of-body experience,’ he says. ‘I’ve never had an anxiety attack in my life, but I imagine that’s what it feels like. I think on some level I knew I was ill. I just had to get out.’

Simon believed initially he was suffering from stress and his boss suggested a leave of absence. ‘I fully expected our GP to confirm that,’ he says. ‘But he noticed that my face was emotionless, almost as if I’d had Botox and he wanted to rule out a neurological cause.’

Today, sitting with Sophia in their beautiful garden overlooking Hampstead Heath in North London, where only six months ago he ran and swam and cycled, Simon is describing with extraordinary grace and stoicism, how he is facing one of the most devastating diagnoses in medicine.

In May, he was told that he has motor neurone disease (MND), a rare and incurable degeneration of the cells and nerves in the brain and spinal cord. As messages fail to reach the muscles, those affected are progressively robbed of their ability to move, speak, swallow and, finally, breathe.

Most people with MND will die within five years of the onset of symptoms. But for those with Simon’s type of progressive bulbar palsy, the outlook is even more bleak.

Progressive bulbar palsy mainly affects the muscles in the throat, tongue and face and it causes difficulties with speech and swallowing. Average survival at diagnosis is between six months and two years, but the disease is moving so fast in Simon that he can track its progress in almost daily losses. 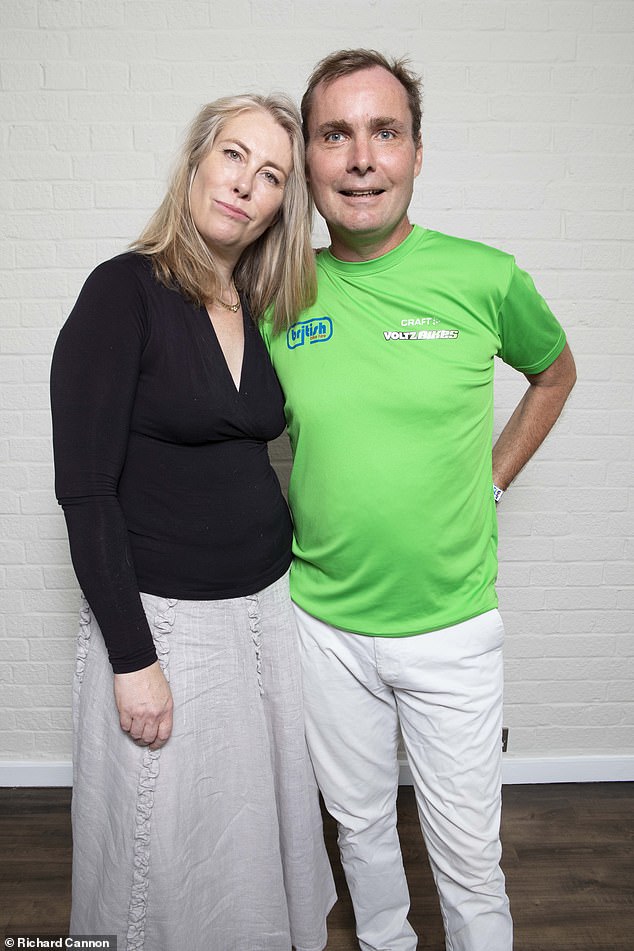 Precious moments: Simon – who has an aggressive version of the disease, which means his speech is already slurred – is pictured here with his wife, Sophia

His speech is slurred and less clear today than it was a week ago and the muscles in his throat that allow him to swallow are weaker.

‘This disease is rampaging through me now,’ he says. ‘I have the most aggressive type of MND and it seems to be taking me out faster than average.’

It seems inconceivable that at a time when his own life is falling apart, Simon is able to think about other people, yet he talks movingly about his plans to raise money to support others with MND.

At the end of June, Simon, his son Freddie and brothers Mark, 58, and Paul, 56, completed a 270-mile bike ride from Land’s End to the family home in Highgate to raise money for My Name’s Doddie, a charity founded by rugby player Doddie Weir who was diagnosed with MND in 2017.

‘I’ve had a good career and I’m financially comfortable,’ says Simon. ‘But a diagnosis like this can break families; converting a bathroom or buying a special wheelchair costs a ton of money and MND moves so fast, you don’t have time to wait for disability benefits.’

Around 5,000 people in the UK have MND; it can occur at any age but is more common between 50 and 70 and slightly more men than women are affected.

A combination of genetic, environmental and lifestyle factors are thought to be involved, although there is some evidence that life-long intense physical activity is associated with MND in people who have a genetic predisposition.

It is the disease that even doctors fear for themselves and for patients because there is so little that can be done to treat it.

‘It is a devastating disorder and it is extremely frustrating that we don’t have more effective treatments yet,’ says Dr Nikhil Sharma, a consultant neurologist at the National Hospital for Neurology and Neurosurgery in London.

‘There is only one drug we can offer — riluzole — which can slow the course of the condition and give patients an extra few months, but MND is a highly variable disease and progression is different in each patient. One area of interest that Dr Sharma is exploring is the role of the gut microbiome (bacteria that live in our large bowel), which has a very profound effect on our health and wellbeing.

‘MND, Alzheimer’s disease and Parkinson’s all involve protein deposits that cause an inflammatory response in the brain,’ says Dr Sharma. ‘Our research has found that we can influence the response of those little inflammatory cells by altering the gut microbiome with new bacteria.

‘The first trial looking at the connection between gut bacteria and MND will start this year and we may have preliminary results two to three years after that.’ 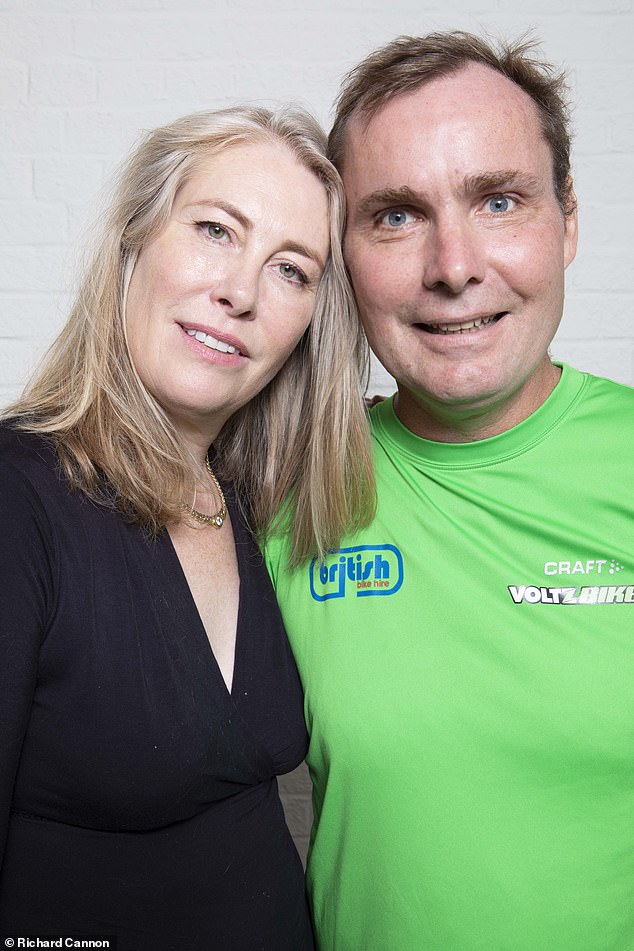 Gender difference: Around 5,000 people in the UK have MND; it can occur at any age but is more common between 50 and 70 and more men than women are affected

No single test offers a definitive diagnosis for MND, but on the basis of his symptoms Simon’s consultant initially thought he had myasthenia gravis, a curable autoimmune disease that causes chronic fatigue and muscle weakness, particularly in the face.

But despite taking medication, by the middle of April, Simon was noticing more symptoms, not fewer. Then one day he came in from a walk and said to Sophia: ‘I’m smiling at people and laughing and yawning even when I don’t want to. It’s really disconcerting.’

As well as affecting the upper body muscles, the condition can also affect the expression of emotions and people might laugh or cry for no apparent reason, a condition called emotional lability.

‘We went to see the consultant the next day and when Simon mentioned this, his face changed completely,’ says Sophia. ‘He arranged a test called EMG (electromyography: where small needles are used to check for nerve response) and warned us to “prepare for the worst”.’

The test confirmed Simon had motor neurone disease. ‘We walked out in silence, completely numb with shock,’ says Sophia. ‘There are just no words to describe that kind of devastation.’

As Freddie and Juno were about to take major exams and Orla had just started her dream job in publishing, Simon and Sophia decided to hold off breaking the news for a month or so.

WHAT IS MOTOR NEURONE DISEASE?

Motor neurone disease is a rare condition that mainly affects people in their 60s and 70s, but it can affect adults of all ages.

It’s caused by a problem with cells in the brain and nerves called motor neurones. These cells gradually stop working over time. It’s not known why this happens.

Having a close relative with motor neurone disease, or a related condition called frontotemporal dementia, can sometimes mean you’re more likely to get it. But it doesn’t run in families in most cases.

If you have these sympthoms, you should see a GP. They will consider other possible conditions and can refer you to a specialist called a neurologist if necessary.

‘That was the hardest time of all,’ says Sophia. ‘We didn’t want to lie to them, but we felt every day they didn’t know was a good day, a normal day. The moment we told them, all normal days would be gone.’

They kept quiet until exams were over then gathered the children at home for Father’s Day.

‘It was the worst day of my life,’ says Simon. ‘I asked Freddie to sit next to me and hold my hand because I was nervous about what I was about to tell them.’

He falters, and Sophia finishes his sentence, her eyes filling with tears.

‘They looked at Simon and they looked at me, and they all started to cry,’ she says. ‘We didn’t have to say anything. They just knew.’

It’s likely Simon will remain mobile as his disease mainly affects the upper body, but he feels it is progressing at ‘terrifying speed’. Swallowing is harder and he’s sure he will be fed via a tube by Christmas.

As his disease takes hold, Simon is experiencing an unexpected sense of peace. ‘Before MND I was rushing around, never thinking I was quite good enough,’ he says. ‘Always feeling less than I wanted to be. Now I haven’t much time to live, I’m sure of who I am and I make the most of every moment.’

His rare moments of self-pity are over the milestones in his children’s lives he’ll never see.

One of his lowest moments was watching a couple playing with their grandchildren: ‘I cried because that will never be me,’ he says.

Simon is planning another fundraiser next year — his target is to raise £500,000 before he dies. But first there is a family holiday in Dorset.

‘The only thing I really want is more time with my beautiful wife and children,’ he says. ‘Because in the end, all that matters is being with the people you love.’

To help Simon raise funds to support others with MND, go to justgiving.com/fundraising/simon-brennan4