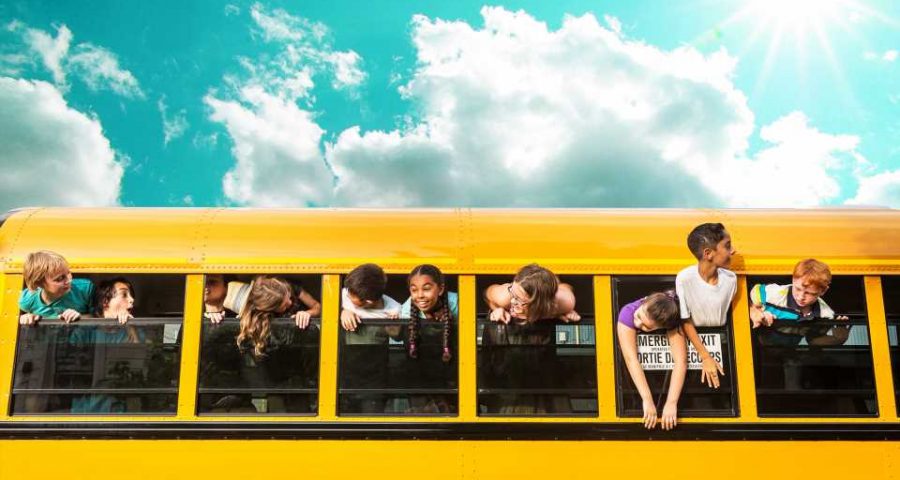 Summer can be a wonderful time for kids: no school, no homework, lax rules — they’re living the dream. Then mid-August hits and so does the realization that school is starting soon. Though your kids might be dreading it, chances are, as a parent, you’re probably welcoming the new academic year with open arms. So how can you help your favorite student gear up for the first day of school? It all comes down to getting them into routines now, so they’re ready when they get into the classroom. SheKnows spoke with several medical professionals about this, and here are their suggestions of healthy habits to start with your kids now, before school starts.

One of the biggest adjustments between summer and the start of the school year is probably the time your kid wakes up and goes to sleep at night. Instead of letting them stay on their summer schedule until the night before class starts, get that routine going now. The Better Sleep Council (BSC — not to be confused with the Baby-Sitters Club) suggests setting non-negotiable bedtimes and wake-up times to help your child get on a regular schedule.

More than that, getting enough sleep is key to their academic performance. “Sleep is a powerful mood regulator too, predicting a child’s mood at school the next day – and a parent’s propensity to lose it in the school drop-off line,”  Ellen Wermter, board-certified family nurse practitioner and BSC spokesperson, tells SheKnows. “Memory, concentration, attention, even creativity – key ingredients of good school and work performance – are also greatly affected by sleep. Emotional intelligence, which improves your ability to get along with others and be socially involved instead of isolated, soars with quality sleep.”

Cut down on screen time

Though your kids may be glued to their phones, tablets or the TV now, things will be different once they get to school. So your best bet is to wean them off of screens and media now. Dr. S. Daniel Ganjian, a pediatrician at Providence Saint John’s Health Center in Santa Monica, CA recommends allowing your kids no more than two hours of media each day, noting that less is better. Then, when school starts, he suggests no screen time for kids during the week and one hour on the weekends.

To accomplish this, Ganjian tells SheKnows that parents can start with internet filters, a family media use plan (like which apps are permitted and for how long), and a rule that there is no TV or internet electronics allowed at the dinner table or in the bedroom.

Grabbing a bowl of sugary cereal in the morning is easy, sure, but it’s not the best option for your kids — especially during the school year. There are ways to ensure your kids start their days off with a nutritious meal that doesn’t take much effort — just a little preparation ahead of time, according to Shira Sussi, a registered dietitian. “Things like baked oatmeal, overnight oats topped with fruit, frittata packed with some vegetables and cheese — these foods can be easily put together in five minutes,” she tells SheKnows. “[All it takes is] reheating or plating, so you know your kids are starting off their day on a healthy note.”

Work on their posture

Even though summer may mean being able to be slumped on the couch for hours at a time, the same isn’t true for the school year. That’s why Vivian Eisenstadt, a physical therapist, recommends that parents get their kids in the habit of implementing proper ergonomics — like sitting straight, standing straight and knowing how to go up and down stairs properly — before they get into the classroom.

“It can make all the difference in the world to teach children and teens how to sit properly and do stretches to balance out the long hours that they are sitting in their chairs and looking on their computers,” Eisenstadt tells SheKnows. “If you can catch poor habits early in life and balance out the severe imbalances caused by poor ergonomics and posture, you can give your children the gift of living a healthier and more pain-free life later.”

For kids with anxiety — whether they have an official diagnosis or not — going back to school can be extremely stressful. I fell into that category starting in kindergarten and stayed there well into college. Each year around the end of July, I’d have constant, low-grade nausea thinking about the start of school. One way parents can help in situations like mine (or in general) is to make sure your child knows they are supported emotionally.

“Your mental health impacts your physical health and stress, depression, and anxiety often exacerbate or aggravate physical conditions, especially in kids,” Dr. Caesar Djavaherian, co-founder and chief medical officer at Carbon Health tells SheKnows. “Across the board, when I look at the healthiest children, I find them to be those who are supported by parents who foster open communication with their kids while at the same time establishing healthy boundaries.”

Djavaherian explains that this does not mean adopting a helicopter parenting style or becoming a Tiger Mom, but quite the opposite. “It’s encouraging and empowering your kids to pursue their own interests, whether it’s reading a book or acting in their school’s play,” he says. “Perhaps your child is an introvert or doesn’t fit the gender binary. Regardless of who your kid is, the more space you give them, and the more you make it clear that your home is a safe space for them to come to you with problems, the less stress you place on your kids, and the more likely they are to come to you with a health issue or concern.”