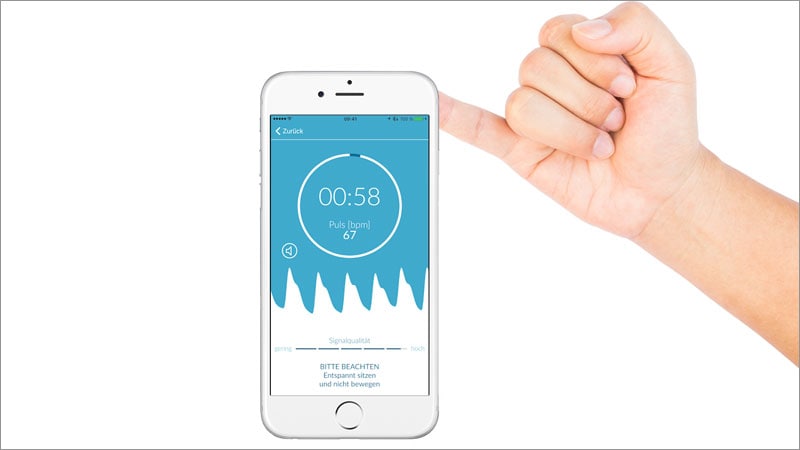 In a population of older adults who were free of atrial fibrillation (AF) but had a moderate to high risk for stroke, self-screening for AF using their smartphones doubled the rate of detected and treated AF compared with usual care over a 6-month period.

Senior author Axel Bauer, MD, presented these study findings from eBRAVE-AF in a hotline session August 28 at the European Society of Cardiology (ESC) Congress 2022 and the study was simultaneously published in Nature Medicine.

An intensified digital monitoring using intermittent smartphone-based photoplethysmographic (PPG) measurement, the researchers write, “is both reasonable and effective to detect AF in a high-risk population.”

Bauer, from Medical University of Innsbruck, Austria, along with an observer who was not involved in this research, say that they would or do screen themselves regularly using this technology, but they also agree that more research is needed to see if smartphone-detected treatable AF translates into fewer strokes.

“Anyone with a smartphone can screen him- or herself for the world’s most important cardiac arrhythmia. This might have huge implications for prevention of stroke,” Bauer said in a press briefing.

“However, future studies are needed to test whether improved AF diagnostics through digital technologies translate into better treatment outcomes,” he continued.

“I think it is likely, but not proven, that high-risk patients with increased CHA2DS2-VASc scores actually benefit from digital screening,” Bauer speculated in an email to theheart.org | Medscape Cardiology.

However, “digital technologies require the willingness of an informed patient to actively ‘take care’ of his or her health. Digital screening is not a one-fits-all approach,” he added.

On the other hand, more older patients performed more measurements compared with the younger ones in this cohort of persons aged 50-90 years, so the objection that older people cannot cope with technology was not true.

Study strengths included requiring the need for diagnosed AF that was treated with an oral anticoagulant (OAC) prescription, he noted.

Study limitations include possible selections bias, because the participants all had private health insurance and may have been more health conscious.

In addition, “too liberal initiation of anticoagulation may change the risk-benefit ratio to the negative” owing to bleeding, Bauer noted, so “to avoid erroneous medical conclusions, one probably should not screen low-risk patients.”

On the other hand, “AF is associated with numerous diseases besides stroke, such as heart failure, myocardial infarction, dementia, renal failure, venous thromboembolism, and probably also cancer,” he added, so AF detection is important.

“AF (and also abnormal PPGs, as we have shown in our study) can therefore also be understood as a biomarker that should trigger further careful evaluation and appropriate treatment of risk factors or concomitant disease,” he concluded.

Invited to comment, Rod Passman, MD, who was not involved with this research, said that “the trial shows, once again, that screening for AF using widely available digital health technologies — frequent pulse checks using a handheld PPG device — increases the yield of AF detection.”

Study strengths “include the siteless design and the ability to use a variety of smartphones,” noted Passman, who is director of the Center for Arrhythmia Research, Northwestern University, Feinberg School of Medicine, Chicago, in an email.

“Limitations include enrollment of a select patient population that may not be generalizable to other groups, the absence of simultaneous ECG confirmation, and a sample size that does not allow us to answer the big question: ‘Does AF screening reduce adverse events in a cost-effective way?'” he continued.

“It may be intuitive that finding AF early allows appropriate treatment and the opportunity to prevent strokes, but we must also recognize the potential harm in overtreating lower-risk patients with chronic OAC, and the additional testing that results from false-positive findings,” he cautioned.

On the other hand, he continued, “remember, too, that there are other benefits in finding AF early in terms of effectiveness of rhythm control strategies and prevention of other downstream effects.

“I think that the ease with which it can now be done, and the low cost needed to do it,” he said, “makes it an attractive option for at-risk patients.”

“Do I have my irregular rhythm notification turned ‘on’ on my watch? Yes!” said Passman.

The researchers invited 67,488 adults in Germany who were insured with a large health insurance provider to participate in the study in early 2020. All were aged 50-90 years, with a CHA2DS2-VASc score of 1 or more for men and 2 or more for women, and without known AF or OAC treatment. Of these, 5551 enrolled, provided electronic consent, and were randomized.

The participants in both groups were well matched. They had a median age of 65 and a median CHA2DS2-VASc score of 3; 31% were women; and their risk factors included hypertension (65%), coronary heart disease (15%), previous myocardial infarction (7%), history of stroke (6%), and diabetes (13%).

Patients in the intervention arm used their own smartphones and downloaded a Preventicus Heartbeats app (Preventicus). They were asked to place their finger over the smartphone’s camera lens to start a 1-minute PPG measurement to detect abnormal pulse waves twice a day for 2 weeks and then twice a week out to 6 months.

If they had an abnormal result, they were mailed an external ECG loop recorder and asked to use it for 14 days and then return it to the study center.

If AF was diagnosed, participants were asked to consult their physicians with the ECG report, and the physicians, who were not involved in the study, made treatment decisions, such as initiation of OACs, at their discretion.

In the usual care group, AF was detected as it would be in clinical practice, which included detection by routine ECG or based on symptoms or during ambulatory blood pressure monitoring.

In phase 2, participants in the conventional treatment arm were invited to switch to the active intervention arm for 6 months.

Patient information was obtained from monthly questionnaires in the app, insurance claim data, or if needed, a phone call.

During the entire study, each active participant made a median of 53 PPG readings from a scheduled 76 readings, and 173 participants had an abnormal reading that resulted in a confirmed AF diagnosis (by external ECG loop recorder) in 61 patients, for a diagnostic yield of 35.2%.

A total of 4752 patients without a primary endpoint accepted the invitation to switch groups for phase 2.

Past and Future Trials

Digital AF screening has been investigated in three large-scale, siteless, single-arm observational studies of Apple, Huawei, and Fitbit watches, but these were in younger patients with lower stroke risk.

In the hotline session, Bauer noted that eBRAVE, unlike the STROKESTOP and LOOP trials, had no face-to-face contact with any participants. They only sent letters to invite participants and were “quite successful” to enroll 8% of those who were invited, he said.

The study was mainly financed by Ludwig-Maximilians-University Munich, Germany and partially funded by Pfizer Pharma GmbH, Berlin, Germany. The authors disclose that they have no financial relationship with the technology used in the study.