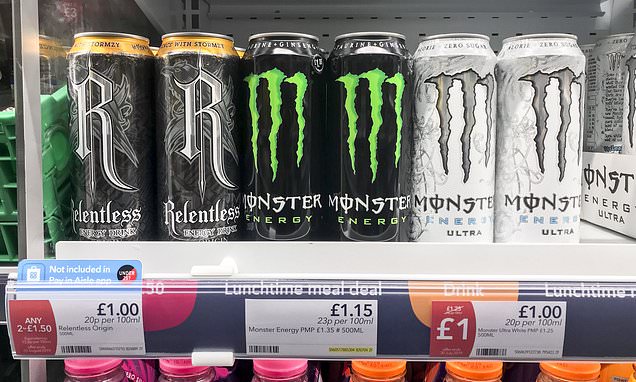 Revealed: A QUARTER of children in the UK ‘consume at least one energy drink on a school-day’

Nearly a quarter of children in the UK drink at least one energy drink on a school day, a survey suggests.

A Good Morning Britain survey found 24.7 per cent of children aged eight to 16 chug one or more of the high sugar and caffeine beverages.

Around a third of energy drink-loving children have one on the way to school, while more than a quarter say they replaced breakfast with one.

A thousand youngsters were quizzed.

Experts warned the drinks — which can contain the same amount of caffeine as a double espresso — are ‘not suitable for children’.

Energy drinks can also contain up to 21 teaspoons of sugar, making children who drink them more probe to putting on weight. 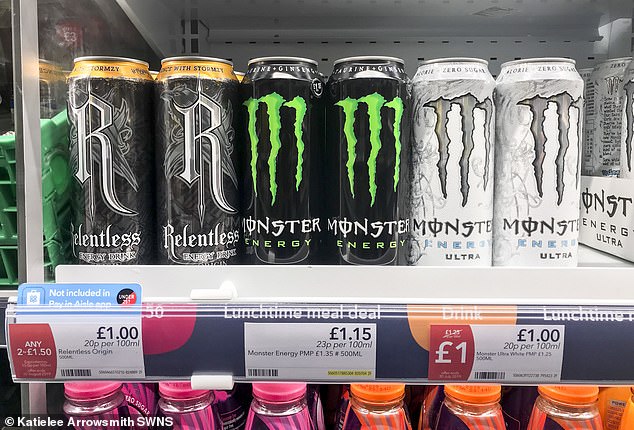 Nearly a quarter of children in the UK drink at least one energy drink on a school day, a survey suggests

Professor Amelia Lake, a dietitian at Teesside University, said the concerning trend would affect children’s behaviour, as well as their health.

The NHS already advises that that energy drinks should not be consumed by young children.

It comes after could be banned from buying energy drinks in Wales under obesity-fighting plans.

The Government outlined plans to ban the sale of energy drinks to under-16s in 2019 but the policy was never carried out during the Covid pandemic.

Several supermarkets, including Tesco and Adsa, joined a voluntary ban on sales. But reports have since claimed retailers are not enforcing the self-imposed ban.

Local shops are still not prevented from supplying them to minors, although manufacturers have to print a warning label on cans.

Experts say the drinks are especially dangerous for children because they have a smaller body than adults.

Professor Lake told ITV’s GMB: ‘I think that drinks that clearly say on the label they are not suitable for children should not be being sold to children.

‘Children are a lot smaller in body compared with adults so that has a significant effect on them — on their behaviour, and also on their health.’

But despite the warnings, the drinks are becoming ever more popular. Tait Cotton, a schoolchild in Leicester, said he started drinking them to fit in.

He said: ‘When I was younger, I used to drink them for fitting in and showing off because you aren’t supposed to have them.

‘Whenever I have one it makes me feel like a kid on a bouncy castle because of how much energy it is.

‘If I’m doing sport it makes me feel like I can run forever.’

ENERGY DRINKS – ARE THEY SAFE?

There has been a stark rise in Britons’ thirst for caffeinated drinks – at least 600 million litres are drunk every year, 200 million more than ten years ago.

Some 55 per cent of those aged between 12 and 24 years old suffer everything from vomiting and chest pains to even seizures from the drinks, despite most consuming less than the recommended one-to-two beverages a day, a Canadian study found.

Previous research has linked energy drinks, such as Red Bull, to obesity, heart abnormalities and even sudden death due to their high-sugar and caffeine content.

Most energy-drink consumers are unaware of the products’ main ingredients, health implications or appropriate serving sizes, experts have said.

How much caffeine do they contain?

A 250ml serving of a typical energy drink – half the standard bottle or can size – contains 80mg of caffeine per litre – twice as much as a regular cola drink, but the same as a 60ml espresso.

Experts have warned that caffeine-packed energy drinks could be fuelling a record rise in diagnoses of irregular heartbeats, one of Britain’s biggest killers.

Just one energy drink daily could trigger arrhythmia, an abnormal heart rhythm which increases the risk of stroke five-fold.

It is thought that this is because excessive caffeine consumption dramatically increases the amount of calcium released within the heart’s cells, disrupting the electrical rhythm.

Experts also warn the addition of high quantities of sugar in energy drinks could be a reason for their potency.

How much sugar do they contain?

Campaigns, such as Action on Sugar have called for a complete ban on the products for under 16s.

Their study in December 2017 found the average sugar content was more than an adult’s entire maximum daily recommendation for sugar intake in the UK.

Likewise, 78 per cent of products exceeded the maximum daily recommendation for sugar intake for a child aged seven to ten 10 years – 24 g or six teaspoons.

Certain manufacturers reformulated before the Soft Drinks Industry Levy in April 2018 in the UK.

Before reformulation in 2017, the Punched Energy and Tropical Guava Flavour products from Rockstar, contained a staggering 78g, or 20 teaspoons, of sugar per 500ml serving – more than three times the daily recommendation of 25g for women and 38g for men.

Now, these drinks contain 24g of sugar per 500ml, the equivalent of six teaspoons per 500ml.