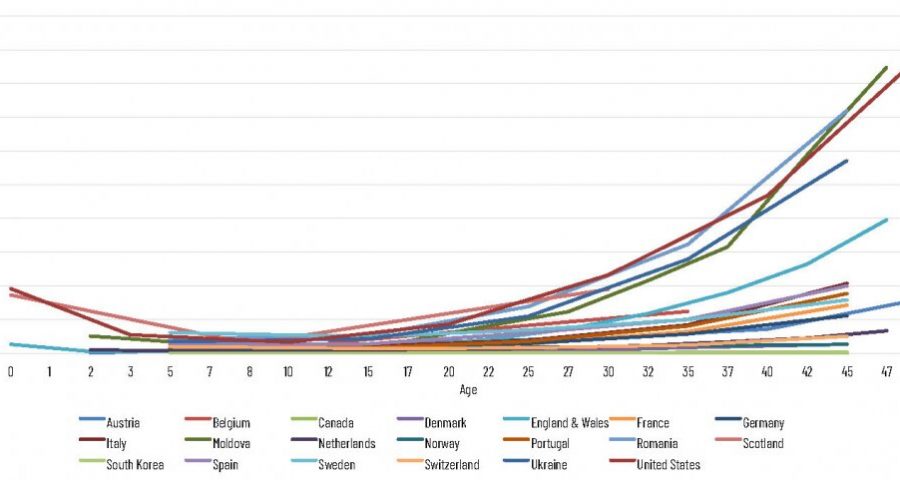 A comparative study of premature deaths to COVID-19 has shown that of 20 countries, the oldest citizens in England and Wales had the highest rate.

The study by University of Manchester epidemiologists, published in the Journal of Global Health reveals 5.78% of the over-90s were lost to the disease.

A substantial increase in deaths in care homes in England and Wales in the first three months of the pandemic—estimated by other researchers at 79%—is likely to have contributed to the figure, the team argues.

Other studies have also shown that fatality in UK care homes was 270–300 times worse than Australia, which has a similar health care system, demographics and care home settings—implying that the different approach to COVID-19 measures, particularly at the start of the pandemic, could be a contributory factor to this high death rate.

The study also showed in some countries, the relatively young had high rates of years of lives lost (YLL)- a measure of premature death.

YLL calculations take into account the remaining life expectancy that someone would have been expected to achieve had they not died at that age.

In the United States the figure was 9 YLL per 1,000 people in the under 50s, higher than the other 19 countries in the study.

The study was carried out by extracting population statistics and cumulative COVID-19 death data from the National Institute for Demographic Studies’ Demography of COVID-19 Deaths database.

Greg Williams, who led the study said: “It is widely acknowledged that the risk of mortality from COVID-19 increases with age, with the highest death rates amongst older age groups.

“As a novel disease, it is reasonable to suggest that deaths from COVID-19 occur earlier than would otherwise have happened, even for the older populations.

“But most mortality measures use an upper endpoint for defining when a death is premature, such as 70 or 75 years of age.

“We argue there is a considerable burden of premature mortality within much older age groups who have died as a result of COVID-19 too, particularly in England and Wales when compared against the other countries in our study.

“Due to the different ways countries record and collect their data, the figure in the paper looks at the over 90s whereas other countries don’t have this age category. However, when we lowered the age category to 75 and 80 years and over, England and Wales still had the highest deaths as a proportion of that population.

“That implies the difference in approaches to lockdown and other measures could have been a contributory factor to the higher death rate in these age groups.

“Whatever your age and wherever you live, your life should be valued. The approach of this study values all life equally wherever you are from. It’s important for decision makers to compare what is happening locally with other places around the world to ensure they are not inadvertently accepting inequalities felt locally.”

Professor Arpana Verma, a co-author of the paper, said: “This approach towards understanding COVID-19 mortality provides an alternative narrative to recognize how different countries have coped with the reality of the pandemic.