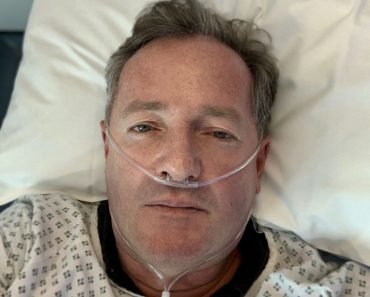 Piers Morgan has been hospitalized.

The outspoken columnist, who frequently stirs up controversy online, shocked his followers on Friday by sharing a photo of himself in the hospital.

In the image, Morgan, 53, is wearing a hospital gown and a nasal breathing tube.

“Bad news… after some extensive hospital tests this morning it appears I’m not going to die,” he joked on Twitter, alongside the hospital selfie. “I can only apologise for all the upset & offence I know this development will cause.”

The photo was taken at the Bupa Cromwell Hospital in London.

Morgan did not share any additional information about why he was hospitalized, or what his “extensive” tests were for.

According to U.K. publication The Mirror, Morgan will be back to work at Good Morning Britain on Monday, where he will also be making a statement about his health.

Although it’s currently unknown what prompted Morgan’s trip to the hospital, in December, he came into work at Good Morning Britain while suffering from a cold that left him “sweating like a pig,” Metro reported.

When his co-host commented that Morgan should have taken the day off, he commented, “‘When they all charge to their remotes to see me, why would I not be here, even if I’m dying?’

RELATED VIDEO: Sarah Hyland Reveals She Had a Second Kidney Transplant and ‘Was Contemplating Suicide’

Shortly before sharing the news that he had been hospitalized, Morgan found himself embroiled in yet another celebrity feud — this time with Sophie Turner.

On Thursday, Morgan retweeted an article about comments English actress Beverley Callard had made about mental health, where she warned against the “danger” of mental illness becoming too “fashionable” among celebrities.

The Game of Thrones actress went on to slam Morgan on Twitter, writing, “Or maybe they have a platform to speak out about it and help get rid of the stimga of mental illness which affects 1 in 4 people in the UK per year.”

“But please go ahead and shun them back into silence,” she added.