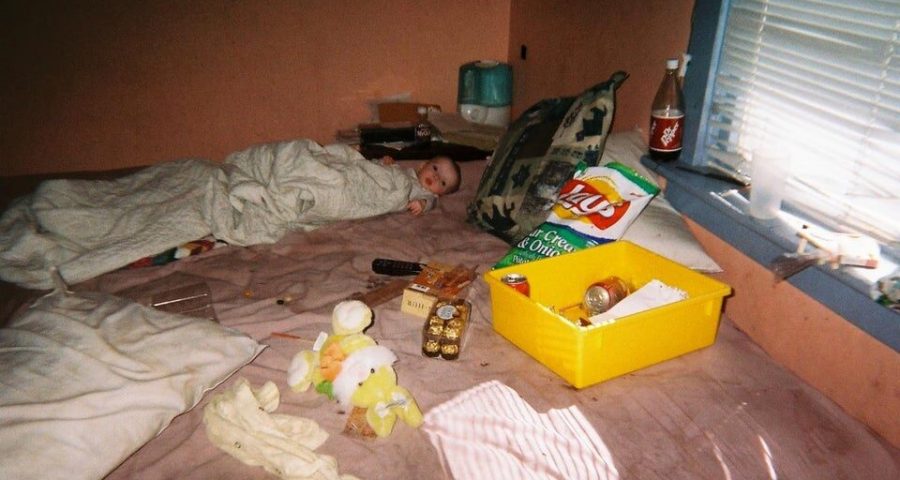 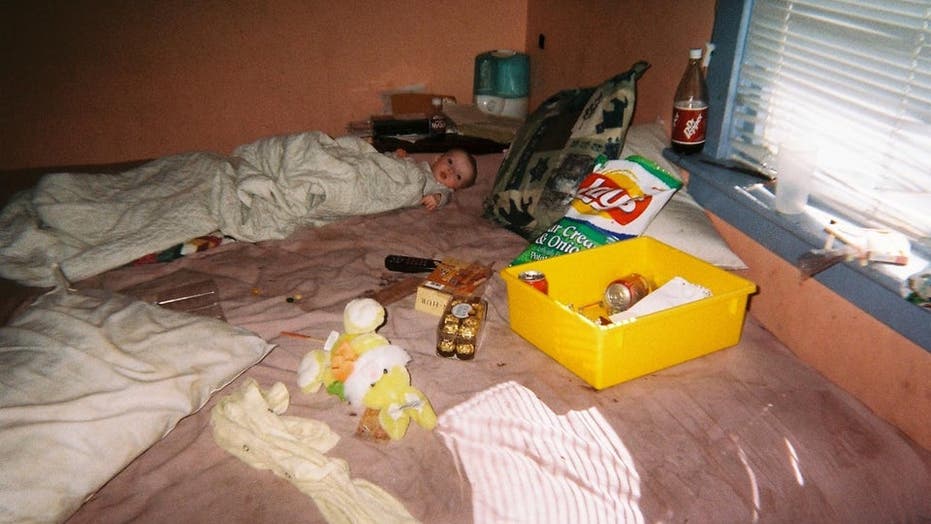 One photo shows needles and syringes resting on a windowsill mere inches away from an unsuspecting infant. Another shows dirty laundry and trash littering the floor as a toddler peers over an unmade bed. This was home life for Davidlee Richardson, Jaralee Metcalf, Danika Richardson and Brynlee Richardson — four siblings who were living with a mother in the depths of addiction. 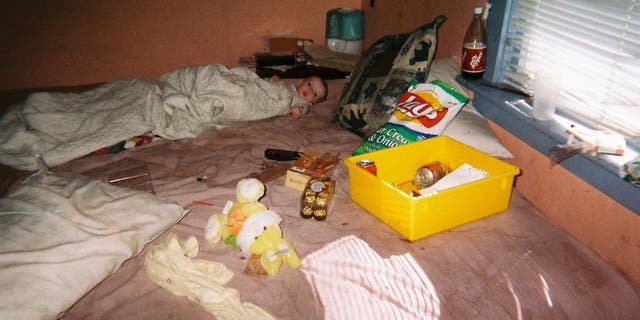 This is the original photo that Brynlee posted to a Reddit forum, which she said was taken by an older half-sibling who showed it to his teacher.
(Courtesy of Richardson family)

Some of their earliest memories revolve around their mother, who was always sleeping, and a much older father who died in a car accident early in their childhood, and was already a dad to nine kids by the time they were born. Their maternal grandmother made sure the kids had enough food to survive.

A PEEK INTO OPIOID USERS' BRAINS AS THEY TRY TO QUIT

“We grew up on Fruity Pebbles and SpaghettiOs,” Jaralee, now 23 and living in Idaho Falls, told Fox News. “When we moved to Tennessee, I just remember knowing that I had watched my dad do it a billion times — just boil pasta, throw sauce over it and throw it together.”

"I knew she loved us, I just knew she made a lot of mistakes."

Danika, now 20 and living in Utah, remembers her dad always making Saturday breakfasts for them — but she also remembers that her mother was addicted to heroin, meth, alcohol, cigarettes and cannabis, and was triggered by caffeine. David, now 24 and living in Idaho, remembers one instance after his father died when he made his drunken mother angry, but he can’t remember why, and he was running down a hill away from her. His mother stumbled, fell and ended up bloodied and cut, so he turned around and went to help her back up.

The siblings don’t speak of their mother with disdain or hatred, but have learned to separate her from her addiction. Danika said she’s never held a grudge against her mom, while Brynlee, now 17 and living in Utah with Danika, said that her mother’s addiction started at 13, so it wouldn’t be fair to blame an adult for something that a teen did. 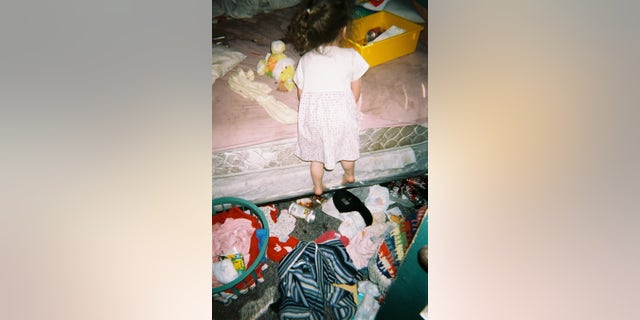 Jaralee said that when she was old enough, she asked a neighbor to homeschool her, so she would be more readily available to help her younger siblings.
(Courtesy of Richardson family)

“My mom was very loving, she loved us a lot,” Jaralee told Fox News. “She also had schizophrenia and bipolar disorder and she self-medicated with drugs and alcohol.”

Jaralee, who took on the maternal role for her siblings to make sure they ate, had clean clothes and attended school, said she and David would break into their mother’s room in the night to make sure she was still breathing. She also asked a neighbor to homeschool her, so she would be more readily available for her younger siblings.

ONE NURSE'S STORY OF ADDICTION AND RECOVERY

And when a half-sibling took the photos of their living situation and showed it to a teacher — which, in turn, sparked an investigation and eventual foster care — the siblings repeatedly told a judge they wanted to live with their mother because they "didn’t know any different,” Jaralee said.

“Of course we wanted to live with our mom,” Danika told Fox News. “It felt normal.”

Jaralee said her mother would also pressure them to repeat to the judge that they wanted to go home with her, and that it took her many years to realize that the living situation was unhealthy for them.

“She said a lot of times — and this really frustrated me — when we were in foster care that ‘If you loved me, you would tell the judge you want to live with me,’ and we told them all the time,” she said. “It took a long time for me to tell the judge, ‘No, we don’t want to live with her.’ Early in childhood it was just the normal, but finally I realized no, this is not normal.”

Jaralee said she remembers sometimes showing up to foster families' homes with just the clothes on their backs at 2 a.m.

After more than 10 years of being placed in and out of foster care, the four were adopted by older half-siblings, with Danika and Brynlee being kept together while Jaralee went with another sibling and David with another. All of them have stayed away from alcohol and illicit substances for religious reasons, but they said their upbringing gave them the tools they needed to thrive today.

“Once we realized that this wasn’t something that happened to every kid, then I was able to stand up to my mom, get us away from that situation and get us adopted,” Jaralee said. “What I want people to know who are going through this situation is that it isn’t what life is like – it does get better.” 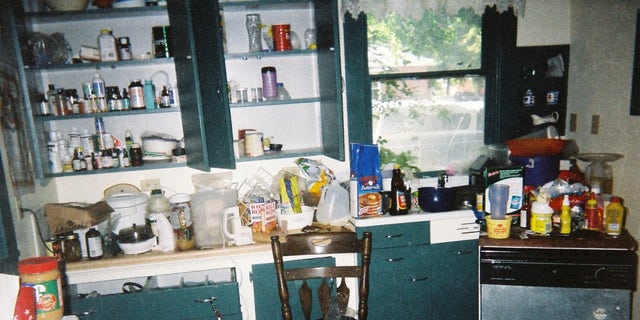 The siblings said they survived mostly on cereal and boiled pasta, and that their maternal grandmother played a large role in helping them make sure they had enough food to survive.
(Courtesy of Richardson family.)

David said their upbringing “forced us to speak our minds” and “stand up for ourselves.” All of them have been through therapy, or are still seeing therapists. They also keep in touch with their foster families, and most plan to foster children in the future, especially older ones.  All four have either completed or are working toward college degrees, thanks in part to the college fund their maternal grandmother — who still plays a large role in their lives today — set up for them.

It was the youngest, Brynlee, who shared the photos on Reddit, because she said she likes hearing other people’s stories, and thought her own might be able to help someone else. She said she didn’t expect the overwhelming response she received, and while some of it has been negative and critical of their mother, many have thanked her for sharing.

They know their upbringing isn't unheard of either. In 2016, 48.6 million Americans used illicit drugs or misused prescription drugs, and more than 63,000 drug overdose deaths in the same year involved a prescription or illicit opioid. The next year, over 15,000 Americans died from drug overdoses involving heroin, with the use of the drug skyrocketing among both men and women in recent years.

Brynlee said she spoke to her mother a few months before she died two years ago, and that her mother told her that she is “beautiful and not to let anyone tell me otherwise.”

“I knew she loved us,” David said. “I just knew she made a lot of mistakes.”

At the time of her death, the siblings were told she died of a heart attack. It was only after her funeral when they received her death certificate that they learned she had heroin in her system, and that she had died of asphyxiation after choking on a small bag.

Danika said her mother wrote that they made her “life worthwhile,” and “her world go round.”

“I’m sorry you missed out on both of your parents," her mother wrote, according to Danika. "But always know how much you are and were loved,” Danika said her mother wrote.