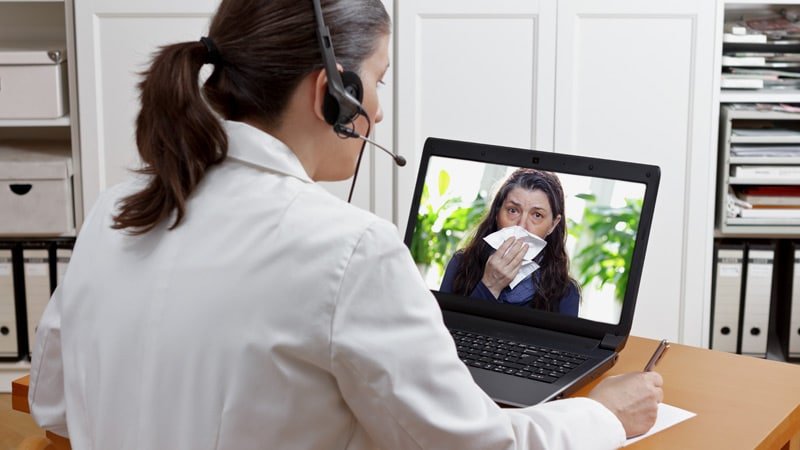 Obstetric patients and clinicians both overwhelmingly reported that telehealth was a safer way to receive ob.gyn. care and improve health care access during the COVID-19 pandemic, according to a survey at a single institution. The findings, from the Vanderbilt University Medical Center in Nashville, Tenn., were presented in a poster at the 2021 virtual meeting of the American College of Obstetricians and Gynecologists.

“The COVID-19 pandemic caused rapid and broad expansion of tele-obstetrics, warranting the need to assess patient and provider experiences and opinions about these services,” Karampreet Kaur, a 4th-year MD candidate at Vanderbilt University, and colleagues wrote in the poster. The group’s findings led them to conclude that virtual choices for prenatal care should be available independent of the pandemic.

Neel Shah, MD, assistant professor of obstetrics, gynecology, and reproductive biology at Harvard Medical School, Boston, and founding director of the Delivery Decisions Initiative at Harvard’s Ariadne Labs, agreed that the study results supported continuation of telehealth even without COVID-19. Shah was not involved with the research.

“The fact that telehealth is broadly acceptable is not surprising but the magnitudes are striking,” Shah said in an interview. “Both providers and patients overwhelmingly see telehealth as a value-added fixture of obstetrical care that should be sustained beyond the pandemic.”

A quarter of the patients had a telehealth visit with a genetic counselor (26%) while 44% of patients saw an ob generalist and 28% saw a maternal fetal medicine specialist. Only 1% reported a social worker visit.

The majority of patients (75%) reported that they felt personally safer using telehealth rather than an in-person visit, and 18% said they would have forgone care if telehealth were not an option. Similarly, 74% of patients said the virtual care reduced their travel time, and 46% said they saved at least $35 in transportation, child care, or missed wages. More than half the patients surveyed were satisfied with their telehealth experience and believe Tennessee should have a tele-obstetrics program.

“The fact that a significant number of patients would have forgone care, and that nearly all providers observed improvements in access, makes widespread adoption of telehealth a moral imperative,” Shah said. “Telehealth and other forms of virtual care require rethinking our standard care models,” he added. “Traditional prenatal care for example is based on a model that is nearly a century old and may not meet the needs of many people. The experimentation with new ways of providing care that the pandemic forced should be an ongoing effort to ensure every person giving birth receives the care they deserve.”

Medical doctors (MD and DO) made up 53% of the 72 providers who completed the survey between June and August 2020, and a little over a third (36%) were advanced practice providers. Nearly all the providers (more than 95%) agreed with the statement that “telehealth was safer than in-clinic appointments for themselves, colleagues, and obstetrical patients.” Similar majorities felt telehealth was an acceptable way to provide health care (94%) and that virtual care improved access to health care (96%).

Most of the providers (85%) also felt that telehealth provided an opportunity for high-quality communication with their patients. More than half the providers said they would be willing to use telehealth outside of the pandemic, and a similar proportion felt that “Vanderbilt telehealth is a positive program for the state of Tennessee.”

Though not an author of the study, another Vanderbilt ob.gyn. also believes the findings support exploring continued telehealth options for the patients and providers interested in it.

“Health care providers and patients alike can attest to the benefits of telehealth utilization, Etoi A. Garrison, MD, PhD, associate professor of maternal-fetal medicine at Vanderbilt University, said in an interview. She was particularly struck by the savings reported by patients. “These costs are difficult to quantify but can have a significant impact on patients’ day-to-day quality of life,” she said.

A limitation of the study is the lack of information on how many were invited to complete it, so it’s not possible to know if the results are representative of the majority of people who used telehealth services, Garrison added. Shah agreed but didn’t think that limitation diminished the clinical implications of the study.

“A relatively small number of patients and providers are surveyed over a long period of time in which the context of the pandemic varied significantly,” he said. “Nonetheless, the findings show strong and internally consistent beliefs among those receiving and providing care that telehealth is valuable.”