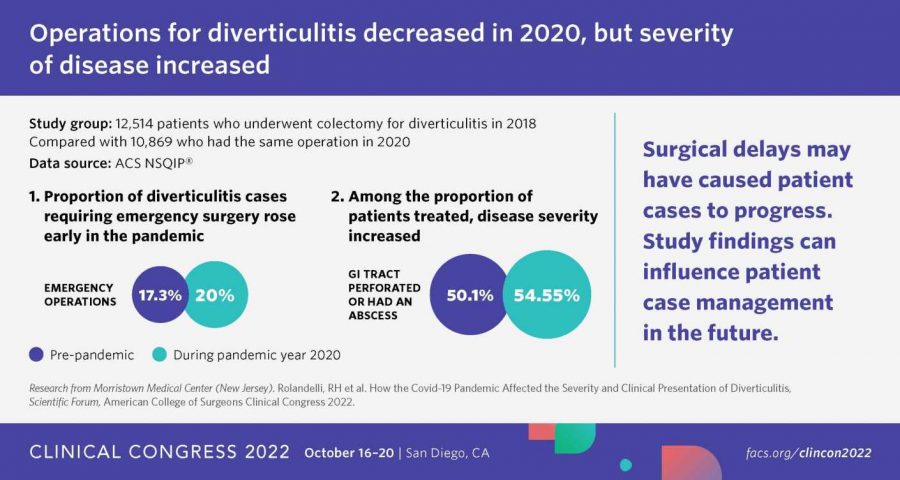 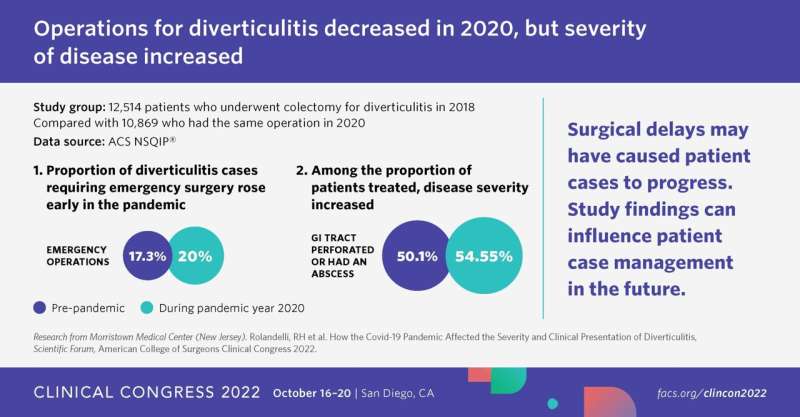 The first year of the COVID pandemic significantly altered how patients and providers treated diverticulitis, causing a significant drop in operations to manage the disease but a corresponding increase in the proportion of more severe cases and the need for emergency surgery, according to results of a nationwide study presented at the Scientific Forum of the American College of Surgeons (ACS) Clinical Congress 2022.

Rolando H. Rolandelli, MD, FACS, chair of surgery at Morristown Medical Center in Morristown, New Jersey, and professor of surgery at Rutgers New Jersey Medical School, presented a study of 12,514 patients who had a colectomy for diverticulitis in 2018 and 10,869 who had the same procedure in 2020 using the ACS National Surgical Quality Improvement (ACS NSQIP®) database. That decline in 2020 represents a 13.14% decrease in operations for diverticulitis, which is an outpouching of the digestive tract causing painful inflammation or infection. ACS NSQIP is the leading nationally validated, risk-adjusted, outcomes-based program to measure and improve the quality of surgical care in hospitals. It was created by surgeons to help hospitals gauge the quality of their surgical programs and improve surgical outcomes by collecting robust, accurate, and precise clinical patient information.

“In the first year of the pandemic, 2020, we saw that patients were accessing the healthcare system less frequently for diverticulitis, but those who did were sicker on presentation. As a result, their postoperative outcomes were not as good,” Dr. Rolandelli said.

“One, when we limit access to health care, we do it by setting a priority for patients that are potentially at higher risk of progression of their disease, and in the early phase of the COVID pandemic, the priority was cancer patients,” he said. “This situation may have led to physicians prescribing antibiotics as an alternative to surgery for diverticulitis, which may have caused patients’ disease to progress. By the time of surgery, they were much sicker.”

The second lesson learned: A possible overuse of intubation respirators early in the pandemic. “We had patients who basically had been in a coma for weeks and could not express their symptoms of diverticulitis,” he said, which typically include pain in the lower left quadrant of the abdomen and, less frequently, fever and constipation. “We probably saw patients who were developing diverticulitis and we were not realizing it.”

Precautions put into place early in the pandemic may have also contributed to the greater severity of diverticulitis cases at that time, Dr. Rolandelli said. Surgeons were informed that the COVID-19 virus could concentrate in the wall of the gastrointestinal tract, including the colon, and that they should exercise caution when using electrocautery to operate on patients with diverticulitis because it could vaporize the virus and cause it to spread. Also, restricted access to computed tomography scans—an important imaging technique for monitoring the growth of diverticular lesions—may have delayed medical treatment or even surgery.

Study coauthor Zoltan H. Nemeth, MD, Ph.D., a research scientist at the department of surgery at Morristown Medical Center and an adjunct assistant professor at Columbia University, New York, explained that a strength of the study was its size and the large population in the ACS NSQIP database. The limitation of such databases is that they do not provide granular data on how individual patients were treated.

Future research will include analyzing 2021 data to see how they compare to 2018 and 2020, according to Dr. Nemeth.